“One door closes, and one door opens.” It’s a popular expression and it’s more true in dirt racing than in many other sports. As our tracks go silent for the winter, the season in Australia is gearing up.

We’re not experts on Australian Dirt Racing, but we do pay attention. And part of what we do here at TDN is to help keep DIRT nation connected to their favorite drivers, series, and where to tune for the best information. So, we’ve put together a guide for you. For some of you, it’s review information, and for others, it’ll kind of read like an “Australian Dirt for Dummies”  but for others this can be a real education on what all goes on “down under”.

Before we get into the Australian scene, we’ve got some mood music to read by

Overview:
In a nutshell, Australia’s not so different from the USA when it comes to dirt. Entry lists for big events are called “nominations”, full bodied stock cars are called “super sedans” and they’re badass actually. The tracks generally are somewhat smaller, though the big 1/2’s can be found. And for the fans, there’s actual stadium seats in many venues instead of wooden or aluminum bleachers that are commonplace over here.

At the concession stand, strange looking birds called “kookaburra’s” sometimes carry off with your sausage, maybe the odd kangaroo pays a visit in the pits as well.  But aside from that, things are pretty similar. There are sanctions and series, crown jewel events, and even some drivers from the US that make the flight to partake for a few weeks of action during the American downtime.

The geography is unique. Many think of Australia as one huge desert, with the much of the population and cities closer to the coast, it’s not completely true, but it’s a somewhat accurate description. – We call it “room for activities”…

Notable drivers such as Donny Schatz, Steve Francis, Gary Tomkins, Tim Kaeding and many more make the long flight over and can be found at the larger events in Australia, or for small two to three week tours during the American offseason. And likewise, Australia sends drivers the other way too with Kerry and Ian Madsen, Jaime Veal, James McFadden and Peter Britten spending either part or all of the season in North America.

Australia is divided into states and territories and they are as follows:

We have a list of the current Speedway’s in Australia for you from www.dirtfan.com . This is interactive, as you click on the track links google will open up a gps finder with an Australian Map. It’s more than worth a look:

410 Sprints: Just like ours here in the states, there’s a top level and it’s called the World Series Sprintcars, an Australian version of the World of Outlaws. There are contracted drivers, just as in the WoO, and they take part in a 13 race tour which starts the day after Christmas. They are the most popular car racing in Australia, just as in the US.

Wingless Sprints: The newest and fastest growing sprintcar class in Australia. Unlike the V8 USAC cars you see in America, they are powered by 3.8L V6 Holden motors with special adaptors fitted. An Australian title for Wingless Sprints can see a field of more than 100 cars nominated. Specific rules and regulations apply to the class to ensure even and affordable competition, particularly the modifications that can be made to the motor.

Modifieds: (North East Style): They’re commonly referred to as “V8 Modifieds” here and they’re fairly popular. As in North America, there different engine combinations and even some 320 engines still in use. For the most part, they’re 358’s and not always aluminum in construction.  There’s a movement towards getting the modifieds as close to North American specs as possible with regards to bodies and engines, the Australian version looks much like the NE modified, but is slightly shorter. Like any such transition, the costs have to be considered among drivers that can’t afford the upgrades, but nevertheless, the modifieds provide great action.

Late Models: They’re becoming more popular every year. Currently there are over 140 registered late models down under. They’re found all over but are a specialty in Western Australia and can be found in bunches at Perth. There’s Rockets, Warriors and any number of American chassis to be found there as well, some of them with a few years of age, but still fast.

American legend Steve Francis has been known to spend time down under as well as Steve Casebolt in recent years. Currently, local driver Craig Vosbergen is considered one of the best of the best.

Super Sedans: If you love open stocks that look amazing, you’ve come to the right place. The Australian Super Sedans feature production appearing cars with front wheel drive, torsion bar, coil over suspension choices and a maximum cubic inch ceiling of 366 with regard to engine size. But, you may elect to use a 4 or 6 cylinder rotary option with weight breaks. No street tires to be found either. To be honest, we’d love to see something like this in the states! 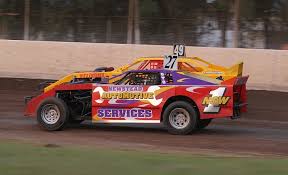 AMCA: Basically, they’re the down under brothers of the IMCA mods in North America. Not quite as popular as the V8’s, they might be a little less powerful, but on the smaller tracks, they provided fine entertainment.  In some cases, enduro style number cards are placed on the roof.

Speedcars: Basically, they’re midgets. Wingless or winged, and found all over Australia. Each state/province has a strong association and there’s plenty of cars to be found.

Here’s some footage so you can get an idea what a few of the tracks look like: