Finally, we have some races to talk about! The dirt preseason went into action this week with an established crown jewel of racing and an up and coming week of Super Late Model action in Tucson, AZ. So most of us have had the dirt racing addiction teased, only to have it come back in full force and anticipation in the weeks leading up to “Florida in February!” (get used to seeing that particular expression, it’ll make your twitter following much easier!)

We’re pretty sure most of you die hard DIRT fanatics know some of the results this week, and we hope most of you watched the action whether it came via Pay Per View from Racinboys or DirtonDirt.com, or whether you were able to watch for free on MAVTV!

But….if you had your power shut off due to failure to pay because you invested your paycheck in pleasurable company or alcohol, don’t worry we’re going to get you back up to date because it’s time for ……………….THIS WEEK IN DIRT!

Bryan Clauson held of 4 time defending Chili Bowl champion Kevin Swindell in the remaining laps to clinch his first of what could be many Golden Drillers Saturday night. The Indiana native bested a field of over 280 cars and took home $10,000 for his efforts in addition to the unique trophy that accompanies the victory. We can imagine him on a date explaining “I’ve got a golden driller ya know.” to some lady and also imagine her saying “show me” right back! He’ll be able to do so now! Congrats Bryan!


We wouldn’t be doing our jobs here at The DIRT Network without showing this highlight. On Saturday night in Tulsa, Shane “the throttle” Cottle didn’t take kindly to some contact in the later stages of his Bmain, tangling with Brad Kuhn. Western PA Sprint Car driver Brandon Matus captured the action..

Gustin, Mars, and Moyer on Top in Tucson 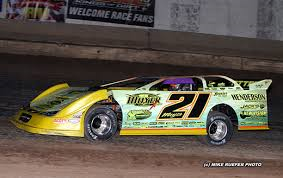 Modified superstar turned late model star in the making, Ryan Gustin took home the $10,000 grand prize in the NDRL’s Winter Extreme in Tucson, AZ on Sunday night. While wily veterans Billy Moyer and Jimmy Mars remained consistent players in the mix all week long. This was quite an accomplishment because of the 56 cars in attendance during the 6 race speedweek, only a small handful actually made every race, speaking to the level of competition this event is starting to attract.

You can check out results and stats from the week here

The World Outlaws will be visiting some familiar places in 2014 for the first time since many of you have been able chew solid food!

The Premier sprint circuit will be making trips to two legendary tracks this year with newly announced stops at Pennsylvania’s Port Royal Speedway on October 25th, and also at big block modified crazy Fulton Speedway in New York on July 23rd which is a high banked facility that should provide some great speed and thrilling action!

These shows promise to be intense and the Port Royal show in particular could play a major role in determining the 2014 series champion. If you’re in these areas…get your tickets! (that’s an order!)


Have a great week everyone! Stay DIRTY