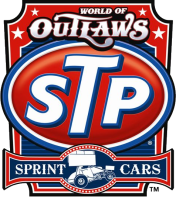 Although last night was technically the third night of racing under the DIRTcar Nationals banner at Volusia Speedway Park, it is arguably the biggest night of them all as it kicks of the World of Outlaws Sprint Car series’ season. It goes down in the books as the first of 90+ shows this year, and a hell of a show it was. It didn’t take long to recall why this is the premier dirt series in the world.

On a rather chilly Florida night where temperatures dipped into the upper 40’s, the pits were jam-packed with 39 sprint cars and a UMP Modified count that reached the mid-50 in total.

Defending series champion Daryn Pittman picked up right where he left on by laying down the fastest lap in World of Outlaw time trials. Pittman and his Kasey Kahne Racing crew were able to throw down a lap of 13.068, a time that is not far off of the track record that was set by Paul McMahan a few years ago.

Heat racing action was as intense as you’ll find all year. Four heats were contested with the top 5 finishers in each being locked into the 30-lap main event. Dave Blaney, Kerry Madsen, Brad Sweet and Steve Kinser won their respective heat races, thus locking them into the Dash and eventual feature lineup.

The sprint Dash saw 10 drivers duke it out on the fast-paced half-mile for 6 laps to determine the top 10 starting spots of the feature. Tim Shaffer earned the Dash win and pole position for the 30-lapper. Paul McMahan, Brad Sweet, and Steve Kinser would finish 2-4 and complete the front two rows for the main event.

Before the feature lineup could be set the Last Chance Qualifer was run where we would see the top 4 finishers transferring on to the A feature. With a whopping 19 drivers scheduled to take the green, it was Sammy Swindell, Logan Schuchart, Donny Schatz and Kraig Kinser that would move on to the finale. World of Outlaws regular Bill Rose elected to take a provisional, making him the 25th and final starter.

The sprints gave their customary four-wide salute to the fans under the background of Johnny Gibson’s masterful call, and then it was time to get down to business. Polesitter Tim Shaffer shot to the lead early on and seemed like he was going to run away with it while he left Paul McMahan and Brad Sweet in the dust to battle for 2nd. McMahan and Sweet ran down then leader Tim Shaffer while maneuvering through lapped traffic at a blistering pace. At one point in the race you could throw a blanket over the top 5 with Dale Blaney sneaking up on the lead trio with Kerry Madsen’s beautiful #29 machine sneaking into the picture as well. The yellow flew on lap 17 just as Paul McMahan gained the lead from Tim Shaffer. With the fan favorite double-file restart to ensue, race leader McMahan chose to start on the preferred inside line and give Shaffer the outside to work with. As the green waved again, Shaffer nailed the cushion of turns one and two and shot back into the lead with McMahan and Brad Sweet in hot pursuit. At this point Kerry Madsen had moved past Dale Blaney for the 4th position. With about 3 laps to go McMahan and Sweet were both able to work by Tim Shaffer and battle it out up front for the top spot. Brad Sweet rode the rim of the track to victory while Paul McMahan finished right on his tail after utilizing the low line on the speedway. Kerry Madsen passed Tim Shaffer with 2 to go to complete the podium. Dale Blaney rounded out the top 5.

With tonight’s win and new (rejuvenated) points system, Brad Sweet will head into night 2 atop the points standings.


The World of Outlaw Sprints were accompanied by the DIRTcar UMP Modifieds for the evening. In a talented field of feature cars, it was Ty Dillon who garnered the win over older brother Austin Dillon and Brian Ruhlman. Ty Dillon started a few rows deep but shot to the front of the field in just a couple of circuits around the speedway and never had to look back. At one point Ty lead by a full straightaway. Austin Dillon pulled up to his younger brother’s bumper while maneuvering through lapped traffic with just a couple laps to go, but that was as close as he would ever get.