We took a week off from this segment to put the focus on the start of Florida speed weeks. In the meantime, we came up with a few issues to chew on.  So if you’ve been stuck doing your taxes all week and are generally afraid of the outcome pending your return, and haven’t been able to stay on top of the info, the gap where stories have escaped you while your were busy. Don’t worry, we are here to catch you up on anything that you missed here on ……………………This Week In DIRT!

The All Star Sprints kicked off their 2014 campaign with a dubious night at Bubba Raceway Park in Ocala, Fla last Sunday.  Following several days of rain, the surface was a hot mess and three days worth of scheduled shows beforehand fell to the wayside. But owner, promoter and radio legend Bubba “the love sponge” Clem would not give up and even asked for and received help from fans to assist in track ironing just to get the show in Sunday night.
Bubba even offered beer to those who helped, which would have been enough for us to not only help iron the track, but work the concession stand and take tickets as well.   However, even with all the extra effort, several drivers withheld their cars from the event citing an unsafe condition.
The decisions of these drivers not to run were met with a mixed response from fans, most of whom have never put a right foot in anything other than a 4 cylinder car on asphalt. What was espically irrating, was that it was later discovered that at least one nameless driver point blank told Clem that basically he “didn’t know the first thing about preparing a track”.
It is a driver’s choice to withhold their car and equipment from any event which it makes no sense to race, from an economic standpoint. Fans don’t have a say in that, and neither do promoter/owners. They didn’t pay for anybody’s car, and have nothing to do with drivers who need to meet sponsor obligations.
However, to belittle Clem’s track prep methods, or his experience in the racing business is absurd. He knows what he’s doing and would have never put anybody in harms way. As a matter of fact all the competitors who chose to run that night made it through the event without any one of them ending up on their lid.
Clem took a chance on losing a huge pile of money just so some drivers could get a little cash back for their trouble and some drivers appreciated it. Not to mention a significant portion of the fans did too.
Our friends at Dirtcast.com caught up with Bubba and he explained the whole situation and it’s very interesting to say the least. Please check it out below. 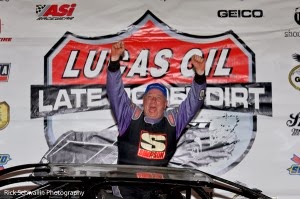 Super Late Model legend Davey “the Juice” Johnson scored his first Winternationals win since 2001 Saturday night, besting the Lucas Late Models and a host of competitive locals and true outlaws en route to a $10,000 payday. The Greensburg, PA native had scaled back his traveling in the past few years, but still had been very competitive wherever he ran, and has pledged to travel more in 2014.  You can check out the race highlights here:

The Bicknell Racing Products Modified Tour, located in the Western, Pa-Eastern, Oh area have announced that they will not race at Lernerville in 2014, or in the near future apparently.

Citing an alleged non payment from Lernerville parent company, World Racing Group, of funds from a tire agreement with Hoosier, the amount disputed appears to be $10,000, which was earmarked for the tour point fund payout. And, other factors including BRP Mod Tour sponsors which were not in line with WRG’s corporate partners apparently led to the dispute.

WRG had basically ended a contract with the regional modified organization early last year, an agreement which had been struck as a 3 year contract, signed by both entities in 2010.

There are probably other factors at play here, and surely not every detail has been made public. As of now, Lernerville/WRG has made no formal response, so only one side of the argument is open for debate. And, as we all know there’s two sides to every story.

Regardless, one thing remains clear, communication between the two sides broke down at some point, and it’s clear there was a great deal of assumption at work too.

The short of it is, the modified fans in the Pittsburgh area will now suffer unless they want to travel 1.5 hours at the very least to take in the 2014 BRP slate of races. And to be honest it truly sucks for them, and from our standpoint, this situation was completely preventable. We won’t name names, that would be un-professional, but we have a feeling a few people know exactly who’s responsible.

We certainly wish the BRP success in 2014. There are some tireless volunteers doing thankless jobs so that area modified fans can enjoy full fields with travelers from other modified geographies and competitive racing. We just wish things had gone down differently.

In time, the future of modified racing in the area seems unclear, but remember that one door closes just as one door opens. And that there are some exciting times ahead in the future as this turn of events will force changes for the good of area modified racing as well.  Stay tuned…

To all BRP Modified Drivers, Teams, Fans, and supporters:
For Immediate release: Feb.13, 2014
To all BRP Modified Drivers, Teams, Fans, and supporters:
The Modified Tour Inc. would like to inform all of the above that it is severing ties with World Racing Group/Dirt Car effective immediately.
Modified Tour, Inc. originally teamed up with D.I.R.T. under the control of Glenn Donnelly back in 2001. Since that time we have worked with D.I.R.T. in many ways, including car support at Eldora Speedway and Charlotte Motor Speedway. Between the two entities working together we felt it had become a good fit for both parties and all teams involved. In 2010 the Modified Tour Inc. and DIRTCar/ World Racing Group entered into a three-year written contract.
At the end of the 2013 season DirtCar/World Racing Group notified the Modified Tour that it would not be honoring its obligation of the third year of the contract.
We the board feel that with the lack of respect that DirtCar/World Racing Group has showed toward us and our membership that we would be uncomfortable to continue in any relationship with them.
We look forward to our continued working relationships with our other sponsors, partners and racetracks, to make 2014 and beyond even better.
ModifiedTour Inc.

Jerin Steele caught with B.O.S.S Sprint director promoter and got an inside look at the 2014 season and insight as to what’s made the young sanction so successful.
You can check it out here:

New Title Sponsor and Impressive Schedule set up big year for BOSS Sprints
We also have our Florida in February Calendar and Scoreboard up and running as well. Folks this is a great way to check in on all the results and upcoming races. It can save you mouseclicks..literally. Be sure to check it every morning as you down your coffee…and whatever else you decide to have for breakfast. Eggs, toast, pancakes..cigarettes…whatever.

Here it is:
Florida in Feburary Scoreboard and Calendar