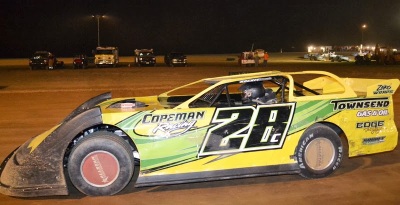 So, like I said, this is a weekly thing. Check back every Monday Night for updated rankings.

This week, Lernerville didn’t have super late models running, Racing for Heros Raceway had a practice session instead of points racing, and Roaring Knob, and Bedford all rained out. That means the guys who raced at Dog Hollow, Marion Center, McKean County Raceway, Americas Motorsports Park and Eriez were the only ones who scored points for the poll.

So let’s get to the rankings.

1. Clate Copeman, 9 Points. Clate had a fantastic weekend, winning at Dog Hollow and picking up a second at Marion Center. He always runs those two tracks particularly well, and will be a force for much of the season. If he keeps this up, he’s going to be right at the top most of the season.

2. Mike Blose, 8 Points. Mike also had a good weekend, winning at AMP and running third at Dog Hollow. Every year we hear that Mike is retiring, but he never seems to follow through with it. I’d have a hard time walking away too if I was as competitive as he is night in and night out wherever he runs.

2. Brandon Delano, 8 Points. Brandon only ran one track this weekend, Dog Hollow, and had another extremely solid run, finishing second. He’s running very well to start the season. Let’s hope he keeps it up.

3. Chris Hackett, 7 Points. Chris won at McKean and ran fourth at Eriez, rounding out a pretty good weekend. He’s always tough up in the northern tier, and this year looks to be no different.

4. Rob Blair, 5 Points. It really is no surprise that Rob is appearing on these rankings, year in and year out he is absolutely one of the fastest cars in western PA. He had a rare off night at McKean this weekend, but he followed it up with a win the next night at Eriez.

4. Dan Angelichio, 5 Points. Dan moved up to supers from crates last year, and was impressive right off the bat, but couldn’t find the consistency he enjoyed in crates. Well, it seems he finally found it and got his first super late model win Saturday night at Marion Center. I’m sure more wins to follow as the season wears on, regardless of where he decides to run.

4. Alex Ferree, 5 Points. Alex stays in rankings, despite not even racing this weekend. The one win at Lernerville last week keeps him near the front of the standings. It’s early yet, so he can deal with a completely off weekend, but once the season gets rolling full swing, a pointless weekend could be a killer as far as these rankings go.

Well, that’s it for this week. See ya next week, same bat time, same place.