The reigning World of Outlaws champion started off a little slow this season, compared to last year’s mark, but turned up the heat this past weekend. Daryn Pittman earned our “Driver of the Week” award for his stellar performance in all four WoO events over the past week. Not only did he claim three wins (Lincoln, Williams Grove [2]) and a third place finish in his last four starts, he did against the toughest drivers in the country, A.K.A. the “Pennsylvania Posse”. The premier dirt series averaged just under 40 cars per event during the streak, peaking at 48 when the Greatest Show on Dirt visited the Pigeon Hills at Lincoln Speedway. As if the wins and prize monies weren’t enough of a reward, Pittman reclaimed the lead in the series points standings from the stiff competition that he’ll race against all season long. 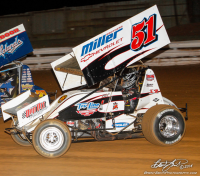 Whether you argue that he’s Pennsylvania-born or Oklahoma-bred, there’s no questioning that Stevie Smith can still get the job done. After struggles in recent years as part of the CJB Motorsports brigade, Smith, who now hails from Broken Arrow, Okla., teamed up with former CJB Motorsports driver turned car owner Fred Rahmer for the 2014 season. The duo didn’t take long to mesh – Stevie Smith piloted one of Rahmer’s machines last week to a World of Outlaws win at Lincoln Speedway in Abbottstown, PA, earning him one of this week’s honorable mentions.

To say that McCreadie struggled last season and early on in 2013 would be an understatement. The Watertown, NY native ended his long drought with the World of Outlaws Late Models Series Friday night when he captured the $10,000 first place prize at 201 Speedway in Sitka, KY. It was his first win since August of last year, which happened to be the $50,000 special at Cedar Lake Speedway in Wisconsin. Though it’s McCreadie’s 26th career win with the series, managing his way off the struggle-bus and into the national spotlight is what earns him an honorable mention for the week.

“Fergy’s” monster win in the $10,000 to win Ultimate-sanctioned late model race at Virginia Motor Speedway ahead of a star-studded field allows Ferguson to garner one of our Honorable Mention awards. Early in the race Ferguson took the lead from rising star Gregg Satterlee and then managed to hold off a furious charge from the Satterlee racing machine at the end of the race to get the victory. Ferguson said that the win may be the biggest of his career to date.

Races to keep an eye on this weekend: