Welcome to TDN Roundtable Volume 3. Here’s where some of us expound on the topics of the day, and give some insight and opinion. Want to make a comment? Feel free!﻿

The Firecracker 100 is creeping up on us quicker with each passing day. It’s one of our favorite events, meaning there’ll be some high quality cars and the pork chop sandwich/steak on a stick truck there too, and we’ll be having a great deal of coverage here at TDN. There’ll be no Bloomquist this year as the NDRL will be running the same weekend, but one door closes and one door opens in racing and there will still be some great drivers on hand. 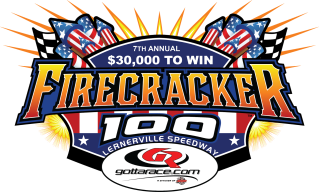 Give us a couple of drivers that nobody’s paying much attention to that will surprise us and be in contention this year, and why you think so. And by the way, by the end of the weekend, we’re going to attempt to steal that pork chop sandwich recipe, or at least offer a reasonable bribe! Any volunteers?

With what will be a rather different field than previous years for this Firecracker, I believe Jared Miley will have another top ten run, perhaps even a top five. Gregg Satterlee should contend for the win. Doug Drown is always tough at Lernerville, too. As far as “touring” level drivers, Dale McDowell has never really made much noise in the Firecracker, but he does have a win at Lernerville a number of years ago. He’s going to have serious momentum coming into the race coming off his big Dream victory. I could see him absolutely winning the Firecracker this year. If Kyle Bronson decides to show up, as he has at most of the WoO races this year, I could see him having a surprisingly good weekend for somebody who hasn’t been there before. I also predict that Darrell Lanigan will finish second yet again. And as far as the Porkchop recipe, I tried to figure it out last year, and even made some of my own marinade/sauce afterwards in an effort to replicate it. I got close, but still, not quite as good as dude’s.-Josh Bayko

The news that Jimmy Owens is planning on running the Firecracker is exciting. If I recall correctly in the past he has had some bad luck at Lernerville, but he’s one of the best in the country and it will be great to have him there if he comes. I hope Eddie Carrier, Jr comes. I think he could have a chance to pull it off. I also would like to see Jamie Lathroum attend too. He set fast time on a preliminary night a few years back and would be one to watch too. Dan Stone and Satterlee should be tough too. Brady Smith is another driver who has had success at Lernerville. He hasn’t found the right setup for the 100 lapper yet, but that could change this year. – Jerin Steele

It’s hard to say who will all show up for this race, especially given the weather forecast. But, I think there will still be a very quality field of cars despite the NDRL taking away drivers. One driver that has yet to race at Lernerville this year is Dave Hess Jr.  Hess has been dominate at times at Lernerville in recent years, and is certainty a regional driver that will be in contention throughout the weekend. – Trever Steele

I’d say a few potential dark horses would be Russ King and Gregg Satterlee. I know, way to go out on a limb. Just have to remember how fast both of these guys have been this season, especially Russ at Lernerville. If he doesn’t get over aggressive and puts together some good qualifying times, he could be a legit threat. As fair as Gregg is concerned, he’s been running well up and down the east coast this season, and he certainly knows his way around The Action Track. And for the record, I’m more of a steak-on-a-stick type of guy.-Pat Miller

We’re nearing the halfway point of the season soon, and there’s been some great success stories so far, Pierce’s hot streak, Satterlee’s validation as a top true outlaw, Madden’s tear earlier this spring, etc. But in your opinion what super late model driver that had high expectations to start 2014 has been a disappointment so far this season?

There are couple big disappointments in my opinion… One, Josh Richards not being able to race so far, and with Rick Eckert’s hiring, it sure seems like he’s going to miss the whole season. Love him or hate him, the kid always puts on a show and is a great ambassador for the sport. Here’s to hoping he recovers from whatever ails him and he gets back behind the wheel soon. Two, John Blankenship has had a crappy year compared to the last couple. Although, finishing second in the Dream might be a sign that things are starting to turn around.-Josh Bayko

I agree with Josh about Richards not being able to race. He is one of the best in the country for sure. Like Josh said hopefully his health improves. Jimmy Mars has had a rough go of it this year for his standards. That can all change though with the Firecracker coming up. We all know how much success he has had in that event.- Jerin Steele

I also agree with Richards sitting out this season.  Losing his presence on the Outlaw tour certainly is not good for dirt late model racing as a whole.   On the Lucas tour, I think the major disappointment also has been John Blankenship.  Blankenship had so much momentum going into the season, but has yet to have scored a victory and sits 7th in the points.  Also, I think the rather lack of performance of the Outlaws has a whole has been disappointing, save for Darrell Lanigan who has 4 victories. Through 13 completed Amains, Tim McCreadie is the only other a driver with a victory. – Trever Steele

Ohio Sprint Speedweek kicks off June 20th at Attica. Do the tour regulars, Blaney, Shaffer, Holtgraver, Haud and Kemenah, bring any advantage into this year’s edition? Or do you expect the FAST (Fremont/Attica) drivers to take more wins in 2014?

Blaney is good everywhere so he has to be a favorite to win the Speedweek points title. The FAST guys will win the majority of the races though. Craig Mintz has been on fire this year. Lee Jacobs is an Ohio Region All Stars regular and he is having a career year so expect him to be competitive too. It will be cool to see what drivers invade from out of the region. Danny Dietrich is planning on running those events so I am excited to see how he does. -Jerin Steele

I’m going to go with The Wild Child Jac Haudenschild for the title. Fast and consistent, a savvy veteran. As Jerin said, the FAST drivers will win the majority of the races. They know the tracks better than the invaders and they might be the toughest local competition currently in the U.S., outside of Knoxville and Central PA of course. -Pat Miller

It’ll soon be Sprint season for Stewart Friesen soon. He’s starting the bulk of his Empire Super Sprint series racing and although that’s no where near the level of top 410 competition, Friesen seems to take podiums wherever he unloads the sprint car (He’s already got a win and a second in 2 races).  Can you envision Stew doing more sprint racing than modified racing in the coming years? And if so, how far do you think he could go in terms of being a competitive full time 410 guy.  Do you think any owners are contemplating getting him in a car in the future?

I don’t think Stew is going to amount to much of a sprint car driver, to be honest. He’s competitive in New York sprint races, sure, but the fields there are the most diluted in the entire country, and that includes the ESS and Patriots. Honestly, there’s maybe five cars up there that are any good. If he really wanted to prove himself in a sprint car, he’d be running some in central or even western Pennsylvania. It’s not far from home, and the pool is deeper, particularly out east. He’s not going to do that, though. He knows he’s not running up front for a while, and his ego can’t handle that. He doesn’t react well when it everything doesn’t go his way. –Josh Bayko

There’s nothing like a night at the track. But sometimes it’s great to be at a track away from home just to experience something different. It’s fun to check out what makes every track unique, from amenities (or lack thereof), quality of racing, food, or the atmosphere of the place.

As summer approaches and vacation season starts, what’s one track that you’ve been to, out of the western PA/eastern OH area, that would make a great road trip, just for a regular weekly show, not any kind of special. What’s one track you’ve been to that people need to experience at some point and why?

Hmmm, I’m going to have to go with Grandview out near Allentown. The weekly shows there can be amazing, even though they run a max of three divisions at any weekly show. They get 30+ 358 modifieds and have handicapped heats and re-handicap the feature, so that means the fast guys are consistently starting in the back. The 358 late models also put on a great show. The food is pretty good too. I haven’t been there in many years, so I can’t speak for the atmosphere these days, but back when I went there pretty much every Saturday night it was always a fantastic time.-Josh Bayko

I know it is a fall event, but I highly recommend the National Open at Williams Grove in late September/ early October. It is such a fun event at a unique venue with many cool places to view the racing action. I suggest standing in the infield by turn one during time trials, or even a heat race and watch the cars enter the run. It is really cool watching the drivers inside the car work the steering wheel. There are so many great competitors that race that weekend and the fans are always engaged in the Posse vs WoO battle.
I also took a trip to the KC Raceway (now Atomic) in Chillicothe, OH a few years back for the DTWC. That is a neat venue and it is very racey too. They had over 100 late models competing during that weekend, but I am sure that on a regular night the racing would be fun to see there too. –Jerin Steele