“The King of the All Stars” Dale Blaney becomes the first driver to win multiple TDN ‘Driver of the Week’ awards. During one of the most grueling race weeks of the year, the All Star Circuit of Champions Sprint Car Series had a stretch of 9 races in as many days scheduled for their 2014 edition of Ohio Speedweeks. Inclement weather took 3 wins over the nine-day stretch, and left the remainder of the races for the “Low Rider” to dominate. Blaney seemingly went on a tear, which at this point is no surprise to any of us. He found victory lane in four of the six Speedweek shows that took place and finished in the runner up spot the other two events. This is Blaney’s first full season behind the wheel of the 14K machine and he’s making the best of it. He will carry a 314-point lead in the series standings into the next series race at Atomic Speedway on July 3rd. 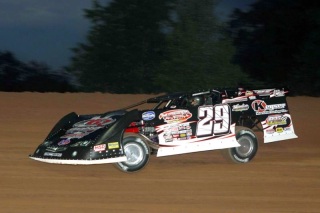 Clearly the class of the World of Outlaws Late Model Series this season, Lanigan topped the best of the best on two occasions this past weekend at the Lernerville Speedway. His first triumph came on Thursday as a kick-start to the Firecracker weekend. The win, worth $6,000, came after a tough battle with Jonathan Davenport and Scott Bloomquist. Darrell continued on to collect the $30,000 Firecracker 100 (rain-shortened to 90 laps) after ensuing the lead on lap 67 due to a mechanical failure under the Davenport machine. After the successful weekend, Lanigan holds 7 series wins and a 186-point lead over fellow competitor Rick Eckert.

Let me start off by asking this. Can we please come up with a catchy nickname for Donny Schatz? As the best sprint car driver on the planet for sometime now, I think it’s time that we find one for him. Now that that’s over with, how about Donny Schatz? Even when he struggles, he manages to click off Top 5 finishes like it’s nothing. As we’re accustomed to seeing, the summer months have rolled around and Donny has kicked it up a notch once again. After trailing the in the series standings for the majority of the season, Schatz has taken command of the series lead behind his 8 wins on the year.

His 1st career 410 sprint car win came in style as he topped the field of tough competitors at Lincoln (PA) Speedway in Abbottstown, PA during the second night of Pennsylvania Speedweek. En route to earning the $7,000 top prize, Moody had to out run the likes of Brian Montieth, Lance Dewease and USAC regular Brady Bacon. During the 30-lap affair, Moody trailed race leader Adam Wilt until the 18th circuit when he assumed the lead role. He continued on to lead the final 12 circuits ahead of a hard-charging Brady Bacon. Kyle Moody timed in 11th earlier in the evening and went on to capture the victory in Heat Race 3.

Races to Watch This Coming Week: