And this week’s winner of our prestigious Driver of the Week Award goes to a man who needs no introduction. So that being the case, we can skip right to the meat of the matter.  Late model legend Scott Bloomquist took apart a stout 54 car field at I-80 Speedway in Greenwood, NE in 80 laps to collect the $30,000 winner’s share of the purse at this years Silver Dollar Nationals.

The dirttrax dominator had been having a rough go of it in the win column this past month, posting several second place finishes. However, Bloomquist put an exclamation point on this particular performance, leading from green flag to checkers against Lucas tour regulars Don “the real deal/bend your steal” O’Neal and The “Ohhhhhh..Show” Jimmy Owens and the likes of Brian Birkhofer, Billy Moyer and Jason Feger.

Congrats Mr. Bloomquist on the first of what we’re sure will be many TDN Driver of the Week Awards! 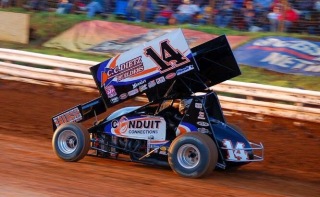 The central PA sprint car veteran beat the Outlaws and the rain at Williams Grove Saturday to pocket $20,000 in the World of Outlaw Summer Nationals.  Dewease held off points leader Donny Schatz for the better part of 30 laps, winning from the pole as the wee hours of Sunday morning took over. The win was significant for Dewease who racked up his 300th career victory in the process

Tim Fuller:
It’s been a rough year for Tim Fuller who’s had to overcome a great deal of adversity the last few years. Signing on as one of the original full time NDRL drivers over the winter, Fuller looked as if he’d found a home. Until the series came crashing down mid season, leaving a big mess in it’s wake including tracks and drivers. But Fuller kept his head up and stayed focused. He’s rejoined the World of Outlaw Late Models for the rest of the tour, and has already posted solid finishes on this year’s Wild West Tour portion. And Friday night, he was rewarded with a win  at River Cities Speedway in a tour race that has seen Darrell Lanigan dominate the majority of the races, Fuller was tops of the field on Friday night and it points to a return to his late 2009 form when he was one of the hottest late model drivers around. We’re not saying that’ll happen again just like that, but it’s great to have a well respected, honest, hardworking Tim Fuller back in the competitive mix for the rest of 2014.

Mason Ziegler:
The DIRT jiggler Mason Zeigler liked winning so nice that he did it twice this weekend as the UMP Summernationals Hell Tour wrapped up at Brushcreek Motor Sports Park July 17th and Attica July 18th. Zeigler became the second Pennsylvanian to win a race on the Hell Tour this season.  To most knowledgeable fans, this sort of breakout was a question of not if but when, and it was answered with Zeigler’s performance over the two days. Congrats Mr. Zeigler!

Races To See This Coming Week:

The Dirt Network The Dominator Takes 1st TDN Driver of Week Award; Deweese; Fuller and Zeigler round out honorable mentions
%d bloggers like this: