For my first order of business, I’d like to apologize for time gap between volumes II and III. My intent was originally to update my rankings bi-weekly. However, two months have passed since my last release. That’s life though, right? How often do things go exactly as planned?

Now let’s get down to the important matter at hand. I’ve ranked the top eight winged 410 cubic in. sprint car drivers based on varying categories. Only races since the last edition (May 22nd) are considered. Obvious variables are also factored in, such as strength of field, amount of races run, highs & lows, etc. As always, I’ll do my best to keep my personal bias out of the situation. So without further adieu, here is the newest edition of “Winged 410 Sprint Car Rankings”. 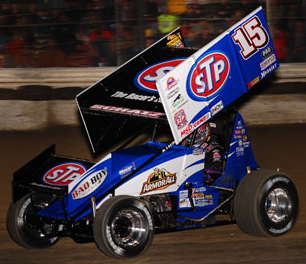 The five-time World of Outlaws champion may very well be en route to his 6th series title, and he finds himself atop the list of sprint car drivers on the current scene. Since we’ve last ranked the drivers (May 22nd), Schatz has regained the WoO points lead from fellow competitor and defending series champion Daryn Pittman. The Tony Stewart Racing #15 machine has scored 6 wins since late May, captured the Don Martin Memorial Silver Cup, and tallied a number of runner-up finishes and hard-charger awards. Completing all of this while running with the best drivers in the world night in and night out, leaves no question that Donny Schatz is currently the best winged 410 sprint car driver.

Coming in at a close 2nd is the aforementioned defending World of Outlaws Champion. Pittman let the points lead fall into the hands of Schatz but has stayed within striking distance for the time being. Pittman still leads series with an impressive 10 wins, three of those coming since May 22nd.

Having what could arguably be the best year of his career to date, Madsen has been impressive thus far. Landing himself at no. 3 in the rankings, King Kerry has been masterful. Madsen currently sits at 5th in the WoO standings, but has been the hottest driver on the tour over the last few weeks. He owns two wins since the 22nd of May, one being a little race at some dirt track in Ohio that paid $50,000 to the winner.

The Low Rider clocks in at 4th on the list for number of reasons…actually, there are probably too many to list. For starters, his domination of Ohio Speedweek is unfathomable. Over a six race span with the All Star Sprints, Blaney collected four wins and two additional podium finishes. He is the current ASCoC points leader, and he picked up a WoO win at Attica on May 30th. He also had strong charges to the front at the King’s Royal and Don Martin Memorial Silver Cup.

“The Quiet Man” rounds out the top 5 based on his consistency to run up front with the premier dirt sprint car series in the world. Although he did capture the hallowed Doty Classic at Limaland earlier this month, finding victory lane a few more times would surely boost him up a few spots in our rankings. Paul McMahan and the CJB Motorsports #51 sit 3rd in the WoO points standings and are still within striking distance of Schatz and Pittman.

If there was to be a wild card in my rankings, it would have to be Justin Henderson. He has proven time and again that he can get the job done in many different cars. The only knock against Henderson of late is that his weekly track, Knoxville, has only raced three times since our last ranking. In those races Henderson has a 1st and 2nd place finish against the toughest weekly competition in the country, as well as a respectable 16th place finish against the World of Outlaws.

It appears that the former World of Outlaws regular has found a match made in heaven. His pairing with the Zemaitis owned #1z has already brought success. Lucas and company didn’t even run one of the PA Speedweek shows and he was still able to capture the mini-series championship over fan-favorite Greg Hodnett. Along with the title came one Speedweek win. Wolfe also had very strong runs last weekend when the WoO visited Williams Grove Speedway for the 3rd and 4th times this season.

As mentioned above, Hodnett is a fan favorite and he continues to find success as time goes on. Hodnett and the Heffner Racing #27 team managed a 2nd place finish in the PA Speedweek points chase. Last Friday night he beat the stout field of World of Outlaws competitors at Williams Grove to claim opening night of the Summer Nationals. Additionally, Hodnett continues to lead the Williams Grove points chase as we head into the latter months of summer.

Thanks for reading! As always, I encourage you to leave any comments regarding your opinion or suggestions that you may have for me.