The “Newport Nightmare” continued his mid-season tear Saturday night when he topped a stout 50 car field at Cedar Lake Speedway to claim the USA Nationals victory. The crown-jewel race was sanctioned by the World of Outlaws Late Models Series and paid an eye-opening $50,000 to the winner. The win, Owens’ 12th on the season, is seen as more than just a success for the Tennessee native. Earlier this spring Owens switched to a Club 29 Race Car, and ever since he has been building the resume for Darrell Lanigan’s chassis each time he touches the track. Even more impressive is the fact that Jimmy has not finished outside of the top three in any of his last 11 starts. The no. 20 machine will next compete at Florence Speedway this weekend to vie for the North/South 100 title. He currently leads the Lucas Oil points standings, holding a 70-point cushion over Don O’Neal.

Brian Brown:
Fan-favorite driver Brian Brown narrowly missed out on being named our TDN Driver of the Week. It’s safe to say that had the 360 Nationals been any other week, he most likely would have gotten the award. Nonetheless, a TDN Honorable Mention is nothing to scoff at. Brown’s impressive run at his home-track resulted in a going-away win against the best 360 sprint car drivers in the country. He hopes to follow up the win with another strong Knoxville Nationals performance with a 410 cu. inch motor under the hood. 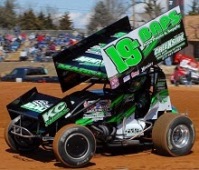 Brent Marks:
Myerstown, Penna.’s own Brent Marks finally seems to have gotten the bad luck out of his system. Marks has been strong all year, but especially as of late. He has won his last three starts behind the wheel, including “The Dream” race that took place at Port Royal this past weekend. Marks had to beat out a field of 40+ cars to capture the win and collect the $10,000 winner’s share.

Kerry Madsen:
Madsen topped the field of World of Outlaws competitors under the bright lights once again this past weekend. Just weeks after his impressive victory at the King’s Royal, King Kerry torched the field in the grueling Ironman 55 event at Ken Schrader’s Federated Auto Parts Raceway. Look for Madsen to be up front and contending for a win this week at Knoxville as he has shown glimpses of stardom thus far during the “Month of Money”.

Races to keep an eye on this week: