Seize the day! Indeed, why wait until tomorrow to get done what you could have accomplished today? Rex King Jr, Carl Bowser and Alex Ferree all understand that philosophy and though some of them had less to do than others, all three of them took advantage of their opportunities and etched their name in the history book as track champions in 2014 at Lernerville Speedway.

They earned their championships not by “points racing”, but rather racing to win, a formula that has served each of them well in 2014 as evidenced by the 14 wins between them. And when they weren’t winning, they were on the podium. It’s difficult to find a finish outside the top three for any of them.

But away from the championship battles, four features waged on. Four fairly entertaining ones at that as Jared Miley bested the super late model field for his third win of the season while King Jr held off a persistent Jeremiah Shingledecker to score his fifth victory in the modifieds. Joe Kelley found victory lane in the sportsman stocks and in perhaps the most thrilling sprint feature of the season, Bowser put an exclamation point on his championship with his fifth checkered flag in 2014. 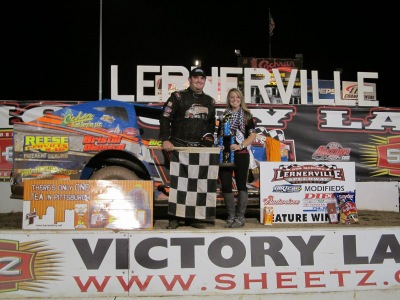 Rex King Jr may have started on the pole of the modified feature, but with a racy track and multiple grooves for his competition to move around in, it was no easy chore staying there.

From the drop of the green flag, he was hunted by Shingledecker and Dave Murdick until the latter went over the banking in turn two, making it a two car battle.

Shingledecker was able to rocket around the top of King Jr following an early caution but lost the brief lead in the next set of turns. At the same time,  Rex King Sr, second in the points battle, left the track with mechanical difficulty, which helped King Jr’s chances of clinching the title at the midway point of the race.  But it would still take a strong effort down the stretch to seal the deal for him. His three second lead was erased with some cautions in the later stages, setting up two crucial restarts. The first one saw him elect the top side and also saw Shingledecker put up a desperate attempt to slide up in front of the eventual champion in turn two. King Jr maintained the lead, but on the final restart he chose the bottom and kept Shingledecker at bay to close out his first track championship at the action track.

“We were a little tight on entry tonight, but once we got it turning left and straightened out it worked out good” King Jr said. “It wasn’t an easy win tonight, we had some tough competition and a bunch of restarts that didn’t help us at all, but we were lucky enough to have the preferred line on our restarts and take off pretty well.”

We were able to talk to Rex King Jr from the pits after his victory which you can listen to here:
King Jr On His First Lernerville Modified Championship

Carl Bowser traded slide jobs and handled lapped traffic for the better part of 25 laps, and was rewarded with Turner’s Premium Iced Tea for the effort. It must have tasted like heaven for Bowser who chugged straight from the carton in victory lane following his feature win in perhaps one of the most thrilling features of the year.

A pair of Wagner’s (Logan and Michael) started on the front row and while the latter Wagner was put behind Bowser with a pass on lap two, the former saw fit to hang around, literally hanging off the edge of the cushion, but hanging with Bowser nonetheless. The two engaged in a fierce battle, cooled only by a lap eight caution when Billy Dietrich spun on the backstretch.  Behind them, Brandon Matus and former track champion Danny Holtgraver were mounting serious charges to the front.

Bowser was able to overtake Logan Wagner on lap 12 and started pulling away once in clean air as Matus and Holtgraver dueled for the third spot both having put Michael Wagner behind them in the closing laps.

But to catch Bowser, Logan Wagner, Holtgraver or Matus needed one thing to happen, a caution or lapped traffic. They got the latter. With Wagner closing in on Bowser, and with the white flag in the air, there was a five car pack of lapped traffic in front of the leaders. Bowser made his way through, not showing the slightest bit of hesitation, and was completely decisive in doing so. He didn’t take any unnecessary risks, and stayed patient and focused, all marks of a champion, which he was for the second time in his career as the checkered flag flew.  Holtgraver completed his mad dash to the stripe, getting by Logan Wagner at the line for a hard fought second place.

“This second one, this feels really good, to have five wins now and be so dominant every night”  Bowser said following his second 410 Sprint Championship at Lernerville.

The late model title was decided in the heats on Friday night, but Alex Ferree was racing to win and it set up a better finish than the early portion of the race indicated.  This was due to the fact that for the majority of the race, Jared Miley was dominating the action, and nobody was even close to touching him.

Russ King took the early lead with Miley second and a surprisingly strong Brian Swartzlander in third. Miley then got underneath King in turn three on lap seven and was in the next area code by lap 10.  Miley stretched out a 6 second plus lead and was completely in control as the green flag laps clicked off and Ferree made his charge forward.

Ferree found himself in deserperate need of a caution or a Miley mistake to mount a serious challenge for the win. And he got both, first when Miley slipped in tourn four  and then on lap 18 when the yellow flag flew. The much anticipated restart saw Miley select the high side and he kept Ferree right where he was for the final seven laps. 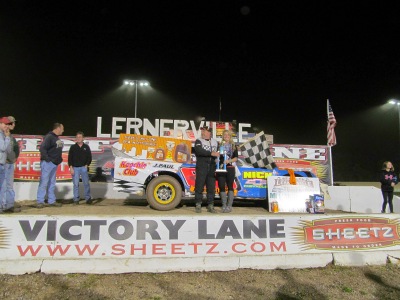 It’s just doesn’t seem like a fab four season without a Joe Kelley win in the sportsman stock division.

And it hadn’t happened yet in 2014. We’re not saying that it’s a case of “Death, Taxes, and Joe Kelley getting a win” or anything like that, but as far as certainties in life go, it’s close to that order.

And so, on this night, Kelley would find victory lane. “I knew where victory lane was, I just hard time finding it this year.” Kelley remarked following the race.

Kelley does in fact know where victory lane is at Lernerville, he’s found it 47 times now, which is the most in division history.  But with the amount of competitive cars in the stocks, victory lane isn’t as easy a place to find as it used to be.

But Kelley made it look pretty easy on this night, evoking memories of the not so distant past where he seemed so unbeatable.

Colin Burke and Pat Hanley started up front for the final feature of the night, and Kelley made his way around both of them fairly routinely. Behind him though was Corey McPherson, desperately trying to make up some ground in his quest to catch Rob Shook and points leader Jim Fosnaught.

McPherson worked from his ninth starting spot to second in less than 10 laps, and took his usual place on the top side of the surface while Kelley worked the bottom.  McPherson would get no closer though as the night belonged to Kelley. McPherson made up a small handful of points in his title chase, but Fosnaught came across the line sixth and has all but wrapped up the final championship for 2014.