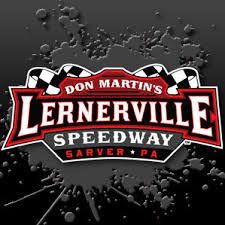 Score it Lernerville  1,  Mother Nature 0.  And it was not an easy win by any means. A torrential thunderstorm threatened to end the 2014 Fab Four racing season without any of the remaining four features being run.

If you weren’t there, you might not believe it, and if you were there, you may just now be starting to dry out.

With just two laps remaining in late model heat one, the skies opened, leaving everyone completely soaked, and a track that many assumed would not be able to be run back in.  Once the rain left, the announcement was made that Lernerville management had every intention of getting the show in as small rivers and lakes raged and encroached on the concourse, front straightaway, pits and virtually every inch of the grounds.

And so the track crew went to work on a monumental task, having to repair around an inch of rain that had fallen in twenty or so minutes.  And much to the amazement of many fans and drivers, they got it done, with a determined effort that was nothing short of a miracle given the circumstances.

During the downtime, fans took part in an extremely comprehensive Lenerville trivia contest while waiting for the action to return, while others sought a way to dry out and warm up. 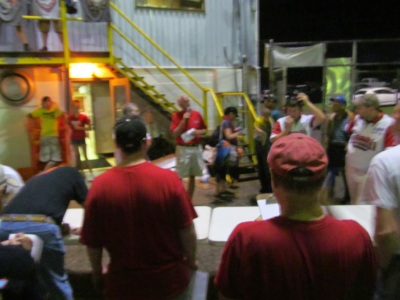 Fans also got more entertainment by way of watching the sprints being pushed off for a second round of engine heat. How nobody thought to sound the Benny Hill theme music on the public address system we don’t know, but it would have been a great complement to the sliding push trucks.

Some drivers weren’t able to stick around for the resumption of racing, and some fans headed home, but shortly after 11:00 pm, the hardiest of the hardy among the fans, drivers and crew, braved the rain, the ensuing chill, and the late hour to see just one last night of fab four action.

The last of the points championships took about two laps to decide as Jim Fosnaught claimed his first ever Lernerville title. And on the final night, he put an exclamation point on it.

Bob Egley and Joe Zambotti brought the field to the first of many green flags in the sportsman feature and Egley looked completely comfortable and very fast on the unusually heavy surface.  Egley stayed out front in the early going while yellow flags and attrition took their toll on the 18 cars that took the initial start.  Zambotti would eventually succumb to a flat tire while Fosnaught made his way to second on lap 11.

Egley got tangled in traffic in mid-race, causing his rear bumper to hang on by a thread and after coming back to the speedway from having it removed in the pits, he left the race for good in bizarre fashion.

Fosnaught, who’d actually managed to pass Egley, only to have his lead erased by a caution, inherited the lead and cruised to his sixth win of the season with Corey McPherson and Rob Shook rounding out the podium in a race that saw 8 out of 18 cars cross the finish line. 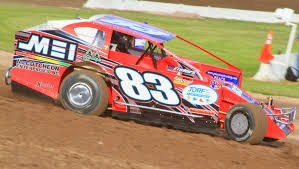 Modifieds:
Brian Swartzlander led from green to checkered in this one to collect his 86th career victory at the action track.  But behind him, Steve Feder and Dave Murdick took part in a back and forth battle for the third spot while Tom Winkle occupied second place.

A late race restart with three laps to go following a red flag for a turn four pile up reset the stage for a possible thrilling finish. But Swartzlander couldn’t be caught as Murdick managed to take the runner up spot from Winkle.

Sprints:
Two weeks ago, rookie driver AJ Flick gave us a glimpse of what he’d learned in his first season as he almost won his first career sprint feature until 2014 champion Carl Bowser passed him in the waning laps.

When he lined up on the pole for the feature, nobody left in attendance had any doubt he couldn’t pull out the victory on the final night of regular season racing.  But Logan Wagner had been turning in strong performances down the stretch too and he took advantage of his front row starting spot.

Wagner chased Flick for the first six laps and on the seventh he dove underneath Flick in turns three and four for the lead. Meanwhile, Brandon Spithaler who was driving in the number 27 car normally occupied by Billy Dietrich, was hell bent on moving through the field.  Spithaler started 16th and moved through the pack and a good amount of lapped traffic to finish with a strong fifth place.

But the night belonged to Wagner who was the fastest car on the track. In clean air, and moving around in between slower cars, Wagner was good everywhere and took home his first career 410 sprint and first Lernerville win simultaneously. 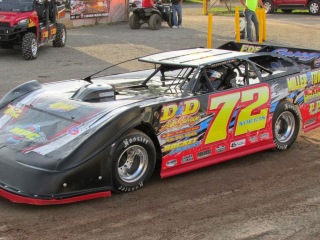 Late Models:
The late model feature was shaped by an event that took place on the sixth lap of the first heat. The aforementioned storm that hit the track was so sudden that the rain made the surface non drive able in less than a lap.

At the end of the back stretch and into turn three, the cars of Alex Ferree, Jared Miley, and Gregg Satterlee, slid off the track at speed and all at once. Ferree’s car was badly damaged in the incident and none of the three, as well as Mike Pegher Jr and Tommy Beck were able to run the rest of the night.

Michael Norris and Kenny Schaltenbrand started on the front row and finished one, two as only John Garvin Jr was able to mount any serious challenge. Norris took advantage of clean air from several restarts and the battle for second between Schaltenbrand and Garvin Jr which waged on for the majority of the race until Garvin Jr jumped the cushion in turn 4 in the waning laps.

In a touching tribute, veteran driver Todd Bachman displayed the number 15 on his car, in memory of former late model champion Nick Jones who passed away this week.