With the World Finals in the rear view mirror and only this weekend’s race at Susquehanna left on the Pennsylvania schedule, the sad reality is that the dirt racing season is coming to an end.

Before the book is closed on the 2014 season in Western Pennsylvania we at TDN have decided to put together a list of categories to recognize our area’s drivers and their respective seasons.

It wasn’t easy to come down to a final decision on some of these categories as there were many worthy candidates, but here are our choices below.

Cooter completed the modified hat trick this season winning the points titles at Sharon and Lernerville as well as picking up the BRP Modified Tour title. He amassed nine victories including a half dozen at Sharon. The Bristolville, OH native also picked up the Lou Blaney Memorial at Sharon. The breakout season certainly was a dominating performance.

Honorable Mentions
Jared Miley- The pilot of the H1 Late Model won nine features in 2014. He won races at Eriez, Lernerville, McKean, and the Floyd Kline Memorial at Dog Hollow. Miley also had good showings outside the region including a fifth at the Winchester 200.

Jim Fosnaught- The driver of the 20j found victory lane seven times en route to his first Lernerville track Championship. He also defended his home turf to pick up $2,000 at the Autumn-Motive Fest/Penn-Ohio Stock series race.

We could all learn something from young Mr. Pifer. He was dealt a bad hand when he suffered second and third degree burns to his legs during an incident at Sportsmans Speedway. But the driver of the number 23, 305 sprint showed the determination, spirit and heart that is ingrained in the fabric of a dirt racer on his road to recovery. He never wavered on the idea that he would be back behind the wheel this season and returned to racing at Mercer on August 11th just a few months after the incident. We look forward to seeing that 23 machine back on the track in 2015 and beyond.

RACE OF THE YEAR IN WESTERN PA- BOSS RACE-MERCER 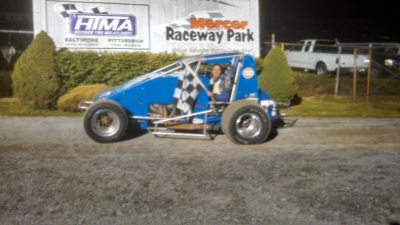 Thanks to Aaron Fry and BOSS, wingless sprint car racing has a place again in Western Pennsylvania. The tour made a stop at Mercer in May and boy did they put on a show. Brandon Spithaler and Dustin Smith drag raced to the line, with Smith narrowly edging out Spithaler by .014 seconds. Spithaler ran the second half of the race with out any brakes, but still continued to pressure Smith throughout the race. The BOSS series also had a great finish at Lernerville when Logan Hupp made a last lap pass for a victory.

Honorable Mentions
Davey Johnson ran a mistake free race while being pressured for the duration by Jared Miley to win a fab four late model race at Lernerville.

Dave Blaney held off his brother Dale to win the sprint car portion of the Lou Blaney Memorial at Sharon.

(This award is for a driver running their first season in a 410 Sprint, Big Block Modified, or a Super
Late Model.)
Logan Wagner doesn’t make his home in Western Pennsylvania, but he made noise in the region. Wagner got his first 410 win at Lernerville in the regular season finale, but he turned the most heads when the World of Outlaws rolled into town in September. He won his heat, and the dash putting him on the pole for the main event. Wagner was running second when David Gravel made contact with him leading to an accident which ended his night. Though the result wasn’t what the driver of the Bedford Valley Petroleum RG3 wanted he still impressed many. Wagner also had a second place run at Lernerville where he traded the lead with track champ Carl Bowser on the final lap.

Honorable Mention
AJ Flick- Flick came close to winning multiple times at Lernerville and Mercer in his rookie season in the 410 sprints including a second place run to Wagner. He will be a force on the 410 scene for years to come.

Jack Sodeman, Jr looked to be headed to a top 15 finish in race one of the Silver Cup Twins at Lernerville, but was clipped by the car of Danny Holtgraver, which was flipping on the front stretch. Sodeman came to a stop in turn one, but his car seemed fine. Safety crews rushed to attend to Sodeman a few minutes later though, and after a trip to the hospital it was determined that Sodeman had a broken leg from the incident. Sodeman has had more than his fare share of bad luck in his career, but we know Jack is tough and we hope to see him back in action in 2015.

Honorable Mention
Jeremiah Shingledecker- The 37md mod was plagued with mechanical issues in 2014. Shingledecker also was involved in several accidents. He did not finish in almost half of the races he started this year,

MOST IMPROVED DRIVER- AARON EASLER
Aaron Easler, in his first full season behind the wheel of a sportsman car, was a fixture in the top five at Lernerville and finished fifth in the point standings. Look for the driver of the 11 car to breakthrough for his first victory next year.

While Kenny Pettyjohn does not reside in Western Pennsylvania we would like to acknowledge his act of donating his winnings from Volusia to the Wounded Warrior Project. It was a very kind act that deserves a mention from us.