Welcome back to another year of the North East Modified Rankings here at The Dirt Network! It’s been a long winter, but we’ve now seen almost every track that runs them open up for the season. Even the one’s in the “Poutine Conference” (Quebec and Eastern Ontario). We love modifieds here and pay attention. So we decided to put out our own ranking list for the beasts of the east that play on the clay!  We’ll do this once a month from now until the end of the season.  And every modified driver that straps in to any big block or 358 is eligible.

The list contains drivers who follow any series, run any weekly track, whether it’s sail paneled or not, DIRTcar/SDS or RoC, or even STSS it’s all good. Whether they call Central, NY, South Jersey, Niagara Frontier, Western Frontier, Eastern PA, Southern Tier or the “Poutine Conference” home, it all counts.

For the first volume, we’ll use anything from Speedweeks in Volusia up until this past weekend (May 1-2-3) as fair game as far as results go.

Here’s a few guidelines to consider:

Now then, here were the lists from 2014: 2014 TDN North East Modified Rankings 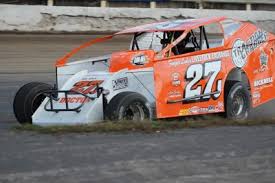 Dr. Johnson collected the first win of the 2015 season at a place nobody had ever seen a modified grace the clay (Golden Isle,GA) back in February and has stayed amazingly hot since.

He’s put the car on the track over 15 times so far and collected 6 wins and 13 top fives. Among the highlights are a win over Matt Sheppard at Five Mile Point in RoC action back in April (Spring 100), and weekly wins at Fulton and Cornwall (double features where he swept, the 2nd one he won from dead last). He couldn’t have asked for a better start in 2015. Can he attribute it to metamucil? Enhanced prune juice? We have no idea, but it’s been great to see!

Got a win in Volusia? Check. Dominating Fonda on a weekly basis? Check. Got a win at Utica-Rome? Check.  (Might have had two had it not been for a run in with Larry Wight). STSS win? Check. He’s raced 17 times and has five wins thus far. But he suffered a bad night at Fulton at the SDS opener in April, so he’s in the Dr’s rear view mirror for now. Will he race the whole SDS tour? We might know by the next edition of our rankings. Or not.

He’s only brought out the Gypsum Express beast 6 times so far this season, and he put 5 of the starts in the top 5. But other than consistency, he managed a win to open the SDS tour season at Fulton in April and was on the podium at Five Mile Point in the Spring 100. He didn’t partake in the Volusia goings on and if he had, we might have had a tie for 2nd (we’ve had those before) but it is what it is and he’s been the model of consistency. He’s going to need to stack some wins to stay here though.

So far, it’s been typical Matt doing typical Matt things in 2015. He wound up with two top 5’s in Florida, and has weekly wins at Brewerton and Utica-Rome (2) and also wound up on the podium in the SDS and RoC openers. Is it us, or are we waiting for something to move him up or down this year? Seems like he’s a bit quiet yet, but it’s early.

Oh, you thought you’d only find central NY guys and an odd Canadian here. No. Godown has raced 8 times and has 5 wins. One was a RoC triumph at Bridgeport and has collected four straight trophy’s at New Egypt.

There may be a bounty coming his way there soon and we can honestly say that about nobody else on the list. Not Sheppard, Hearn, Decker…not anybody!  Okay, so New Egypt (damn fine racing btw) may not have the all stars of CNY, but there’s enough competition that he beats there to be as high as he is on our list! There’s no apologies on this end. And if he’d go full time on SDS, he’d be smack dab in the middle of the top 10.

The Quaker Shaker has been busy to start the 2015 campaign recording a Volusia win, an STSS win at Bridgeport and a weekly win at both Bridgeport and Big Diamond. He was hot in the middle towards the end of 2014 and has picked up right where he left off. We’re expecting big things..

Expect Hearn not to stay this far down the list for long. But keep in mind that the slow start in SDS last year left him a few points short at the end.  We’re not saying it’s anywhere close to panic time for the Jet. Far from it. But he’s been a quiet soul since returning from Volusia with a win. He’s got a weekly win at Malta and everything’s been more or less in the top 5 for him thus far. But he failed to reach the top 10 at SDS Fulton which makes the next three races a little more important.

Rudolph may be one of the the busiest racers in the modified ranks right now next to Danny Johnson and Friesen. He’s put the car on the track 15 times garnering an opening night Ransomville win, a Big Diamond special event win, and some top 5’s and 10’s in really good competition. But it was a rough go at Volusia (no top 10’s) and he also failed to reach the top 10 at Fulton (SDS), and has only 1 top five in four Utica-Rome appearances. We’re thinking he’ll be getting hot at some point, it’s not a question of if, it’s when.

The venerable Mr. Tomkins has only five starts so far this year, but won at Canandaigua on opening night and had a top 10 at Fulton (SDS).  He could easily fall out next month, he’s not had any manner of good luck to speak of in years, but wouldn’t it be great if he hung around and played a factor in the big specials this season?

Phelps has raced very little in the young season, but what he’s done, has been a sign of good things to come. He wound up on the podium at Fulton (SDS), and opened his weekly action with two top 5’s at Brewerton and Fulton. If he can get some special event win confidence brewing, he could be a permanent top 5 fixture.

Jackie Brown: Pocketed over $7800 in surprise Gobbler win at Accord in biggest career win

Larry Wight: Took home the gator in Volusia and will be a factor in the top 10 sooner and not later

Duane Howard: 2 for 5 at Grandview early on and 3 wins total on the season


And that’ll do it for this month. We’ll see you in June for Volume 2! Stay DIRTY everybody!