Greg Wilson was in the process of taming the field at the Monster Half Mile, but a lap 18 caution erased his eight-second advantage.

The yellow may have allowed Wilson’s fellow competitors to catch up, but it certainly didn’t dash his hopes for victory.

Wilson pulled away once again on the restart and finished off his dominating performance picking up the All Star Circuit of Champions feature in front of a packed house at Pittsburgh’s Pennsylvania Motor Speedway Saturday night.

It was the 23rd career win with the ASCoC for Wilson, a two-time points champion with the series.

The Benton Ridge, OH resident took the lead from outside pole sitter Dale Blaney on lap seven and used the bottom groove of the speedway to check out on the field.

Once Wilson was standing beside his W20 sprinter in the victory lane the emotions started flowing.

“You get crabby when you don’t win, but this right here is why we do it,” Wilson said to ASCoC announcer Blake Anderson in victory lane. “I want to thank (PPMS) for having us. This is a fine race track.

“I also want to thank the fans for coming out. I appreciate them spending their hard-earned money to watch us put on a show and I hope they enjoyed it.”

The Steel City Outlaw Tim Shaffer, who had just finished second in the late model feature, and Blaney paced the field to green after a six-wide salute to the fans. Shaffer took the initial lead only to see Blaney get by on lap two. Wilson also worked his way by Shaffer, but a caution for a spin by Andrew Palker and Sheldon Haudenschild forced Wilson to go back to third.

It didn’t take long for Wilson to get past Shaffer after the restart. He then quickly caught Blaney and made the race-winning pass.

Eric Williams slowed on lap 18 to bring out the second and final caution. Cole Duncan used the restart to his advantage jumping from fifth to third. Duncan briefly passed Blaney for second, but had to settle for the final spot on the podium. 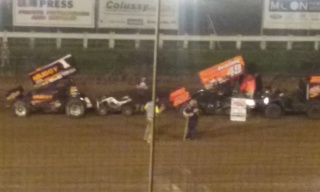 “(Greg) could really keep the speed up and run so fast around the bottom,” Blaney said. “He whooped us pretty good tonight, but second is okay. We’ll take it and move onto the next one.”

Jack Sodeman, Jr, after some bad luck at Lernerville on Friday, finished an impressive fourth in the Seger 25 and Shaffer rounded out the top five.

While Wilson was dominant in the sprints, the same could be said for Brandon Burgoon in the super late models.

Burgoon led all 25 laps in a non-stop feature and did so running away from the field. Shaffer, who also moonlighted in a late model at Eldora Thursday and Friday at the Dream, was the runner-up in the 47, John Mollick was third, Alex Ferree fourth and Colton Flinner fifth.

Josh Holtgraver took the checkers in the crate late models to close out the night. Corey McPherson was second, Ben Policz third, Michael Reft fourth, and Tommy Schirnhofer charged from the back of the pack to finish fifth.