What’s up people? As you can clearly see, rain is the prevailing them this week. As in, out of the eight tracks that count towards these standings, just two of them actually got shows in this week. As for the picture, I know, I know, it’s Tyler County, which doesn’t even count in my standings. The reason it’s the picture is that I Googled rained out dirt track, and out of the pictures that popped up, this is the one I used.

That said, if you ever get the opportunity to go to Tyler County, by all means go. The racing there is usually unbelievable. I must warn you, though, it gets dusty. Real dusty. Make sure to bring some goggles and a bandana. and wear a hat. You’ll thank me later.

Anyways, predictably, there isn’t a whole lot of movement this week in the standings. I mean, only ten drivers scored any points. So that means I can’t really list their results for the weekend. So I’m going full picture book this week. I’m just going to post pictures of the top ten (okay, thirteen cars because of ties and what not). That way if you happen to hit one of the tracks you’ll know who to look for to be fast. I’m also going to show how many wins they have in the scoring season.

Here’s some pictures of race cars and some words or something. 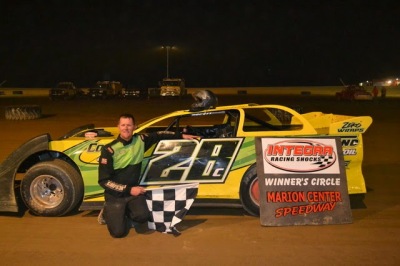 1. Clate Copeman, 25 points. Clate didn’t score any points this week, but he has 4 feature wins to this point.

2. Mike Blose, 22 points. Mike also got rained on all weekend. He has 2 feature win so far.

4. Dylan Yoder, 15 points. Dylan actually raced this weekend. He won at Port Royal. It’s his only win so far.

4. Jim Yoder, 15 points. Jim actually scored points this week too. He ran 4th at Selinsgrove. He has 1 win so far.

6. Jeff Rine, 14 points. Jeff won at Selinsgrove Saturday night. He has a total of 2 wins to this point. 7. Steve Cambell, 13 points. Steve ran 3rd at Selinsgrove Saturday. He has 2 wins on the year so far.

7. Dwayne Taneyhill. 13 points. Another dude who got rained on. He has 1 win on the year so far.

10. Jason Schmidt, 11 points. Jason ran Selinsgrove, but didn’t score any points. He has 1 win to this point.

10, Alex Ferree, 11 points. Alex got rained out as well. He is the only racer in the top ten without a win yet.

10, Tim Senic, 11 points. Tim was soggy too. He has 1 win so far this year.
And that’s it for this week. Sadly, next weekend looks like it’s gonna rough weather too, so next week’s writeup will probably have some time wasting shit on it too. The week after, though, it’s Christmas in June for us late model fans in Western PA. Yep, it’s Firecracker weekend. Me and my dad and the rest of the TDN crew will be in attendance. If you see us, stop by and say hi.
Later.