‘Modified Mania’ took to the action track on a beautiful Friday night for racing.  Late race drama was the theme of the night as restarts proved to be the deciding factor in multiple events.  Rex King Jr. stole the $2000 payday in the Big Block Modifieds after a caution on the white flag lap erased a huge lead for Mat Williamson. Ryan Montgomery drove from 4th to the victory on a late race restart  in the RUSH late model makeup feature.  Jacob Hawkins went unchallenged to victory in the Renegade Modified Tour event, as did Adam Hilton in the Renegade Modified tour feature. To round out the evening, Joey Zambotti scored his first Sportsman victory of his career after late race drama occurred between Wayne Carbo and Corey McPherson going for the win.

A pair of Kings made up the front starting row of the 30 lap event, with Rex Jr. racing to the early advantage over his father.  Carl Murdick and Shawn Fleeger tangled on the backstretch on lap 1 to slow the early pace. King Jr. once again took right to the cushion and held the early lead with Rex Sr. in tow.  Steve Feder, Mat Williamson, and Kevin Bolland battled for 3rd in the early laps. Williamson got the best of the battle and took 3rd on lap 4 off the inside line.  Garrett Krummert’s attempted slide job on Feder did not end well for either driver, as both went off the track in 3 and 4 to bring out the yellow on lap 6.

Yellows continued to fly, seemingly in two lap intervals on lap 8 and 10.  Williamson was able to get by King Sr. which allowed him to pull alongside King Jr. on the lap 8 restart. King Jr. chose the bottom, but it was Williamson who charged from the outside to the lead.

Williamson quickly extended his lead by utilizing both the high and low grooves on the lap 10 restart.  By lap 20, Williamson had a straightaway lead over King Jr., while Dave Murdick, King Sr. and last starting Erick Rudolph battled for 3rd.

Williamson looked destined to record his third straight victory but on the white flag lap, Jeremiah Shingledecker spun to erase his five plus second lead. Williamson again chose to start on the outside on the restart, which had worked flawlessly in the prior restarts.  However, this time it did not. King Jr. used the moisture off the bottom to pull even with Williamson down the frontstretch and then slid into the lead going into 1 and 2. Williamson crossed over to regain the lead down the backstretch coming to the white flag lap. But when Williamson’s car failed to find traction on the inside of 3 and 4 coming to the white flag, King Jr. charged to the outside to the lead and stole one from the St. Catharines, Ontario driver.

King Jr. picked up $2000 for his efforts, Williamson settled for 2nd,while King Sr., Rudolph and Murdick rounded out the top five.

Jacob Hawkins charged to a commanding early lead from the outside pole in the 25 lap feature. His brother Jared quickly followed suit, taking 2nd from Derrick Ramey on a lap 1 restart.
After two early yellows, the racing went uninterrupted the rest of the way. The Hawkins brothers quickly gaped the field as both had over a straightaway lead over 3rd place. Jacob rode the cushion around the action track and went unchallenged to the victory, although lap traffic did make things interesting at times for the Fairmont, WV driver.
Jared was able to keep Jacob in his sights but could not mount any serious challenge for the victory.Ramey held off David Scott, the former Lernerville Sprint Champion and many time late model winner, for the third spot at the finish, while New York’s Rich Michael Jr came from 12th to finish 5th. 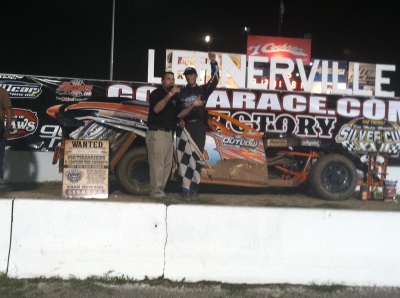 RUSH Modifieds
Pole sitter Jordan Eck took the early lead in the 20 lap feature, but by lap 2 he had his hands full with Brandon Ritchey and Adam Hilton closing. Ritchey attempted to pass to the outside of Eck, but it was Hilton who used the moisture off the bottom to take the lead on lap 3, just prior to a caution for Rocky Kugel and Kole Holden.
On the restart, Hilton jumped out to a commanding lead, as the Buffalo, NY driver had his 3A glued to the bottom.
Brandon Ritchey cleared Eck and Nick Ritchey for 2nd, but would spin in turn 2 on lap 6.
Yellows plagued the middle portion of the 20 lap event. Hilton proved strong on each restart, while Nick Ritchey rode in 2nd and Rocky/Larry Kugel battled for 3rd.
Hilton continued to ride the bottom groove following the final lap 13 restart. Nick Ritchey tried to mount a charge on the outside but was no match for Holden.
Nick Ritchey rode home 2nd followed by Larry and Rocky Kugel. Holden, who won the RUSH Sportman Modified engine giveaway prior to the feature, charged to finish 5th after the earlier caution.

Twenty-Six of the region’s best crate late model drivers returned to the action track for their makeup feature from July 3rd. John Waters and Daryl Charlier paced the field to green with Waters taking the early advantage on the outside. 4th starting Corey McPherson quickly moved to 2nd on the outside as well, while 6th starting Max Blair charged on the inside to take 3rd.

By lap 6, lap traffic was already a factor for the lead trio of Waters, McPherson and Blair.  Waters powered his #11L machine between two lap cars on lap 9 to extend his lead.  The next lap, McPherson slid high off the cushion in turn 1. Blair had no where to go and the two drivers made contact which allowed Blair to take 2nd from McPherson.  At the halfway point, Waters held nearly a 3/4 straight lead over Blair, Charlier and McPherson.  Meanwhile back further in the field, Ryan Montgomery, Kyle Lukon, Tommy Schrinhofer, and Alan Dellinger were under a blanket battling for 5th.

Third running Charlier suffered a flat tire on lap 21 to bring out the race’s only caution.  Seemingly the theme of the night, this caution was the deciding factor and erased a sizeable lead for Waters.  Waters chose the outside on the restart, with Blair to his inside.  The two drivers battled hard for the advantage going into 1 and 2, which caused both cars to push up the track.  This allowed Montgomery, who restarted 4th to slide under both to lead lap 22.

Waters fought back the next lap with a slider off turn 2 to momentarily hold the lead. However, Montgomery would retake the lead at the white flag and then charged hard off turn 2 to score the win in dramatic fashion. Dellinger slid into 2nd at the white flag after Blair and Waters again made contact on the last lap. Waters scored a disappointing 3rd after dominating the first 21 laps, while Schrinhofer charged to take 4th on the final lap over Blair.  Montgomery came from the 11th starting spot for the victory, while Dellinger drove from 13th to 2nd. 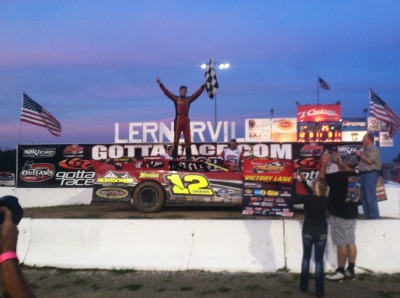 The 20 lap Sportsman feature saw Wayne Carbo and Joey Zambotti on the front row. Zambotti held the lead on lap 1, but it was Carbo who pulled a slider off turn 2 for the lead the following lap.  The race continued to run green through the halfway point, with Carbo maintaining the lead over Zambotti.  Jason Fosnaught and Corey McPherson, who was pulling double duty in the C33, battled side by side for third for many laps, but it was McPherson who took 3rd for good on lap 11. Zambotti’s car begun to push several times in the middle stretch of the race, which allowed Carbo to extend his lead.

Carbo’s three second lead was erased on lap 18 as Adam Lipinski spun to bring out the caution.  This setup a restart with Carbo on the inside and Zambotti on the outside.  Zambotti was able to get a decent restart to hold pace with Carbo, but as the battle intensified, both drivers pushed high off turn 2. This allowed McPherson to make it three wide for the lead and ultimately take it coming to the white flag. Carbo mounted a challenge on the outside and then would drive into McPherson, sending his car into the outside barrier and spinning in front of the field.

McPherson made a remarkable recovery to keep the car going in the right direction, which allowed him to keep the lead.  Carbo was sent to the rear of the field for rough driving following the incident.  McPherson’s front end was badly damaged, which setup an interesting Green White Checkered restart.  On the restart, McPherson pounded the cushion and looked to have the lead on the outside coming to the white flag. However, he would push way high off turn 4, allowing Zambotti to move into the lead on the inside. Zambotti held the point from there, taking advantage of the late race drama to score his first Lernerville Sportsman victory.  McPherson managed to drive his damaged car to come home 2nd, while Fosnaught took 3rd, Brandon Wearing made a charge to 4th and Bob Lipinski came from 10th to finish 5th.

Next Friday, Fab Four Racing Fueled by Turners returns to the track to round out the month of July.