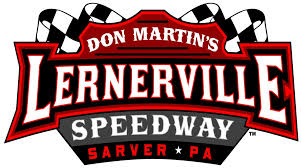 The phrase “better to be lucky than be good” could be heard in the pits and stands all throughout four fantastic features at Lernerville Speedway Friday night, and it was applicable to three of them as AJ Flick, Mike Pegher Jr and Rex King Jr all pulled out dramatic victories in the waning laps. And the sportsman stocks saw Terry Young hold off a strong late charge from Joe Kelley to take his second win of 2015. A fast track and racy surface provided a night that saw it’s fair share of momentum swings, and just when it appeared that natural order had been restored to the field rundown, the hand of fate dealt a blow to several drivers.

First in line for the parade of heartbreaks, was one Scott Priester, who’d been running very strongly in recent action, culminating in a win at Mercer and a heat win at PPMS with the All Stars last Sunday. Priester looked very fast once again on Friday night as he put the action in the first heat behind him in short order and by a wide margin. However as he entered the final set of turns on the last lap, something broke on the car and he wound up in the turn four catch fence after several wild flips.  Priester walked away from the scary scene with little to no injury.

As the feature took the green flag, Ralph Spithaler and two time feature winner Dan Kuriger found themselves on the front row. Kuriger quickly asserted himself as the leader while former track champion Danny Holtgraver found himself directly behind him in the early laps as the two set to battle for the early lead with Kuriger up high and Holtgraver electing to run the bottom. Lurking behind them and charging forward in quick fashion were Brandon Spithaler and points leader AJ Flick who started fifth and eighth respectively.  Meanwhile, Holtgraver was able to make the pass for the lead on the front stretch on lap four and looked to be in command as he immediately went to work on lapped traffic. But Brandon Spithaler quickly went to work on Holtgraver and followed him through and was the quicker car in the early to mid portion of the feature.

Spithaler picked his spot and made the most of the lapped car of Zach Morrow, to set his pick and move around Holtgraver for the lead on lap 11. Once there, Spithaler gained separation as each lap clicked off, working the mid to high groove with authority. It looked to be his race to win until the first fantastic finish of the evening unveiled itself.

On the 20th lap, Zach Morrow brought out the first yellow flag of the night following his spin in turn two and during the subsequent caution laps, a car appeared stalled at the turn three pit entrance at the top of the backstretch, which happened to belong to Spithaler.

Holtgraver inherited the lead, and appeared set to take the win with a handful of laps remaining, but entering the first set of turns on a lap 21 restart, his left rear tire came off the rim, causing drivers behind him scurry to avoid chaos. The lead then went to AJ Flick, who once out front, never looked back in collecting his second win of the season while Brandon Matus finished a stout evening, finishing second from his sixth starting position. Kuriger continued his strong season and completed the podium coming home third.

“Tonight was similar to how I won my first race, the fastest cars broke and I got a little bit lucky,” Flick remarked in victory lane. “I don’t know what happened with Brandon, I saw Danny had a left rear going down and Dan Kuriger got some bad luck and got stuck behind him on the restart. So the luck was definitely on our side, but the crew still put me in good position to be in fourth when all that chaos went down.”

Having taken over the driving duties of the Detman #111 ride over at the midpoint of the season, Matt Lux has looked completely comfortable and on his way to a win sooner rather than later and on this Friday night, it looked as if he had the leg up on victory lane starting on the front row alongside Michael Norris.  The two drivers took the green flag and went straight to work in a battle for the early lead of the 25 lap late model feature until they tangled in turn two on the third lap which caused Lux to spin, bringing out the yellow flag.

On the restart, Norris kept the lead, but Mke Pegher Jr was coming quickly as he moved around Dan Swartzlander for second and set his sights on the leader.  Up front, Norris was in his office at the high side of the speedway which had developed plenty of cushion to lean on. Norris and Pegher Jr would then battle for the lead until lap 8 when John Mollick brought out the second caution flag. When the race picked back up, last week’s winner, Alex Ferree had joined the battle for the lead, moving forward from his tenth starting spot.  After another round of cautions, Lux had also joined the fray along with Gary Lyle, and the way the entire night of racing had been developing, it seemed any driver on the lead lap had a chance to win.

No matter how luck goes in racing, drivers still have to be in position to receive the benefits. And in the second half of the contest, Norris, Pegher, Ferree, Lyle and Lux were in position, with Ferree, having gotten around Pegher Jr on lap 13 as he  furiously hunted Norris for the top spot with little in the way of lapped traffic to work with. Then fate intervened, and Norris suffered mechanical failure on lap 19, putting Ferree in the lead with six laps to go and following a caution and restart, he looked to be well on his way to victory as Lux passed Lyle for the third spot. But Ferree bobbled on the cushion in turn two on the 23rd circuit and Pegher Jr would not give back the gift as he inherited the lead en route to his second win of the season.  Lux would wind up in second place after coming all the way from the tail while Lyle would round out the podium.

“We got into Alex there a bit when he jumped the cushion,” Pegher Jr explained regarding the circumstances that helped propel him to victory. “I hope he knows I didn’t to it on purpose, we were both going for the win. You couldn’t really exit on the bottom because you enter the corner so hard, but there was plenty of traction out there, the car could just slide up a little bit and we had no problem getting off the corners.”

Just when the assembled fans thought the night couldn’t get any wilder, the modified feature made it’s way to the surface and the feature was studded with story lines. Would pole sitter Kevin Bolland be able to fend off the field for 25 laps? Would Garrett Krummert avenge the mechanical gremlins that took a certain victory from him the previous week? Would Mat Williamson be able to be a significant factor starting from dead last by virtue of his three straight wins?

Bolland started out with the early lead while fourth starting Garrett Krummert headed straight for the top of the speedway and straight to second place. A steadily improving Steve Fede would complete the top three in the early laps.  Krummert would try Bolland  from the top side, then switched to the bottom in an attempt to wrest the lead away but his bid would be unsuccessful. The next opponent to try Bolland would be Rex King Sr who made his way around Krummert on lap seven and began closing in on Bolland.

Bolland entered lapped traffic on lap 12 and saw his lead shrink until a caution for a Jeff Miller spin on lap 14 reset the scene.  On the restart, Bolland elected to start on the bottom, putting King Sr on the top as Bolland got a good run of the second corner and kept the top spot for the meantime. The yellow flag waved again on lap 15 for none other than third running Garrett Krummert who succumbed to a broken car for the second straight week.

Bolland would have to play defense on a pair of restarts towards the end in an attempt to hold of King Sr and Rex King Jr who’d advanced from his ninth starting spot to join the top three as the laps wound down. King Jr had passed the elder King for second, and then following a lap 18 restart, he would dive underneath Bolland to take the lead. Once out front, King Jr would never look back as Williamson nearly completed the full field run through, managing to pass Bolland for second on lap 23 while Feder would make his way around Bolland for a strong podium finish.

“It was fun out there tonight, but it got a little rough on the restarts with the triple seven car (Bolland),” King Jr said.  “I’m glad to see he’s back and up to his old stuff, but whatever, we’ll just deal with it and keep passing him, like we did tonight. There’s a lot of good cars here, there’s probably ten or so cars here that can win on any given night. When I’d seen dad (Rex King Sr) and Bolland playing the cat and mouse game, we were closing on them and if we could get some restarts I knew we could make it happen.”

If three fantastic finishes weren’t enough for fans in attendance, they got an unexpected bonus of a stock feature that was not only highly competitive, but caution free!

Terry Young and Wayne Carbo lead the field to the green flag and it was Carbo who went upstairs and planted himself in the lead in the early going while Young and Joe Kelley took positions down low.  Brett McDonald then challenged Young for second early on until Kelley was able to get underneath him at the lap 7 mark.  Simultaneously, Young seized the lead from Carbo while Kelly, who’d dropped back to fifth early on, reversed his momentum and moved under Carbo for the second spot.

At the 15 lap mark, Kelley had caught Young and closed to within a glimpse of the lead and would make one more charge for the win with one lap to go as left the bottom for the top of the surface, but he would come up short as Young stayed consistent in lapped traffic and completed the run towards his second victory of the 2015 season.

“I’ve got no idea what happened to Wayne but I thought for sure he was going to beat me,” a chuckling Young said in victory lane. “The track was really in great condition and there was a lot of bite in it and the car really liked it.