And this is it. For the final time, the beasts of the east will grace the Moody Mile dirt in the salt city. For years, Syracuse was the race anybody and everybody wanted to win. It brought out Indy guys, Nascar guys, and every big money dirt driver within a reasonable distance whether they traditionally drove a modified or not.  And to this day, it’s still the pinnacle of the north eastern modified season. 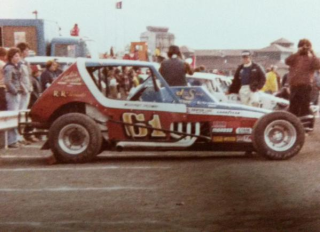 And that day, will come and go later this week.  A new tradition at a new facility will take the spot that the event has now, but will never quite be the same experience at Syracuse provided since 1972.  So, if you’re in the area, enjoy it! Savor it! And appreciate the history behind it, and all the great times and relationships that have come from it over the years.

Where: The New York State Fairgrounds

When: Thursday through Sunday October 7-10

How to Follow: Get the Pay Per View Package from Dirtvision.com It’ll all be available.  Can’t do it? then follow the wonderful @DTDMike (Mike Mallet) on twitter or facebook, he’s a TDN hall of famer and doesn’t miss a beat! For LIVE updates as they happen, try this link from Dirt Track Digest

So what does it take to win? Well, it takes skill, patience, a great car, and a great team. But more than that, it takes the ability to make the car last 200 miles while putting yourself in position to win. Lots of guys can nurse the car around the track and finish 20th. But to win, a driver must know when the exact moment to go for the win is. It’s a unique race, with a pit stop to boot. Some say it’s like a nascar race on dirt. And yes, sometimes it comes down to fuel mileage.  But no matter what you may think of it, the uniqueness of the format and distance make it special.

As far as the track goes, the mile tends to get hard and slick fairly quickly. Slower can be faster as the action goes along. But the driver that wins, is the driver that can stay consistent and yet keep the leaders in view until it’s go time!

Now, let’s talk about some drivers. We’ll start with the prime contenders!

First of all, did you read our most recent edition of our North East Modified Rankings?

Stewart Friesen: Last year’s winner and two time champion comes in fairly hot once again and is the favorite coming in. Friesen’s got he experience, the nerve, and the skills to repeat and become the final champion. But it might not be enough as there’s a driver that’s as hot as Friesen has been there is lurking.

Billy Decker: He could easily be the champion as he’s driven the wheels off the car in recent action. Decker’s won here before, but not since 2005 and would love to take the last 200 on the mile more than ever. He’ll have the car to beat in the final 50 laps perhaps as he knows how to keep it fresh over the first 3/4’s of the race, and he’ll be hunting like a hungry dog this year.

Matt Sheppard:  The 2009 champion and three time Super DIRTcar Series winner comes into the affair a little on the cold side, but don’t let that fool you. Sheppard is more than capable of getting the job done.

Brett Hearn: The six time champion, traditionally hated as much as he is loved (the great ones usually are) may be a surprise fan favorite to take the final checkered flag at the mile. And not many are really talking about him which is a little surprising. Because if there’s one thing we can assume, it’s that he’s going to give it his best shot. It’s his last opportunity to put a 7th name on the cup so to speak. He comes in a little bit cold, not that it should matter though as his instincts are still amazing and his car will be more than up to the challenge

Here’s some others to look for!

Dave Blaney: It’s been a while for the former Nascar and World of Outlaw Sprint driver, but Blaney could be a dark horse worth following beyond the novelty factor of his appearance.  Like riding a bike, you never lose the ability. The only question is can he get enough seat time to feel comfortable for a good time trial run. If not, he could still come from the mid pack or further back to win this one.

Danny Johnson: If the Dr can make the machine last, he could be in the top 5 at the end. And if that’s the case, anything’s possible!

Billy Dunn: The surprise 2013 winner has looked good in practice and should still be a top 10 factor for most of 200 laps, he may need some luck to make it happen again, and he’s due for some.

Kenny Tremont:  He’s been incredibly hot down the stretch and he’s done it before (1999)

Larry Wight: Lightning Larry Wight has taken his game up a notch in 2015 and has been fast everywhere he’s run this year.

Frank Cozze:  Yes, we know some of you are asking who he is.  He’s a former champion that looked great in practice this week!

To simply reach into a hat of the four names of the top contenders and draw one would be silly.  They’ve all got a great chance. So Friesen and Decker are the two obvious choices. But we could be due for a first time winner in the last edition of the 200 as we know it, and if that is the case, we’ll go with Larry Wight in a mild upset!