What’s up people. Hope you’re having a good holiday season. We here at TDN are. Of course, the prevalence of booze and foods during the holidays helps that immensely. Helps take the sting off racing season being over .

But just because the racing season is over, it doesn’t mean that things are happening in dirt racing, although what’s happening now is stuff behind the scenes as drivers and teams and sanctions and such work out plans for the ’16 racing season, which begins in just five weeks out in Arizona (unless you’re in Australia or New Zealand, you get to see racing this time of year. Lucky bastards.)

So what we’re going to do here is keep you aware of all these totally real happenings, so you can sound super smart to your friends next year on opening night when they’re confused why driver A is car B or whatever. We’ll keep you updated throughout the offseason as things happen.

12/2/15 – HBR had a press release the other day that Matt Sheppard had been released from his ride, despite being the reigning Super DIRTCar Series champion. Seemed like weird move, but according to sources deep within the industry (Jerry Higbie’s Facebook), it was a mutual decision, as the New York Football Giants have offered him the starting role of quarterback, effective immediately. The reasoning is Matt clearly knows how to win. Eli Manning, not so much. Here’s a pic of him totally getting ready for this weekend’s game:

12/4/15 – In a bizarre rash of rumors, Rocket Chassis has been linked to a possible merger with Longhorn chassis. But now we’ve learned at TDN through a field correspondent that it’s not a chassis merger or anything. Mark Richards and Kevin Rumley have been tabbed to be the astronauts on a top secret SpaceX mission to the dark side of the moon. The mission is code named LongRocket. It will be sponsored by CV Products, AES Racing, Valvoline, Seubert Cattle Ranches, and that some guy named Rudy with a taco truck in Ho-Ho-Kus, NJ.

12/6/15 – With the ever increasing cost of racing, 8 tracks in the northeast reportedly have come together to make a rule change in regards to the modified body style. Starting in the upcoming season, all mods will be required to strip their cars of all body panels except for doors (for sponsors and numbers), and panels that protect the engine. In related news, 8 other tracks have decided to go with UMP late model body rules for their modifieds, and all bodies must be made out of titanium, carbon fiber, and industrial grade diamonds, because the rich guys don’t want to run with the poor folks.

12/7/15 – In the world of winged 410 sprint car racing, it was announced that self starters would be mandatory at all WoO, NSL and ASCoC shows, to much chagrin. After a tumultuous couple days with team owners, drivers, and fans complaining and threatening to go non-wing racing, it was pointed out that nobody actually read the fine print under the rule. That fine print mentioned that all haulers must have self starters. Then everybody laughed. Except Sammy Swindell. Because Sammy doesn’t laugh. Or smile. Or have fun.

12/9/15- It didn’t take Billy Decker long to pick up a new ride after his release from Gypsum Racing, but this one will be quite the change. He’s been hired to be the new pilot of the four man Jamaican bobsled team. We here have at TDN managed to get a spy photo of his training.

The series which features road courses and parking lot ovals at America’s finest independent and assisted living facilities, had previously ruled that Bloomquist’s cell phone controlled, adjustable suspension was outlawed, prompting his owner CJ Rayburn, to kick him out of the chair.  “To be fair, I didn’t really like my fellow competitors much,” Bloomquist said.

“I missed one race at Oak Glen Nursing home with the flu, at the start, and none of the other drivers voted for me to have any show up points so they get what they get, I hope nobody supports that tour now.”  Bloomquist did mention that the post race ice cream socials would be the only thing he truly missed about the series. 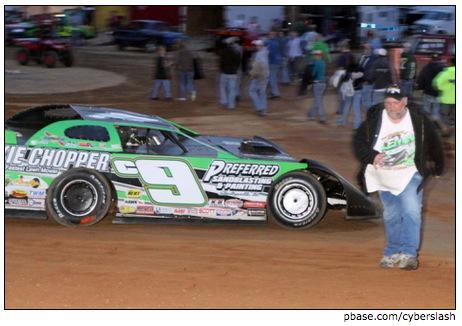 12/9/15– Venerable late model driver Steve Casebolt has announced that to fund his 2016 endeavor, he will hit the road, doing six weeks in Las Vegas by hitting the casino! Only he won’t be gambling…much.  Casebolt announced that he’d be undertaking a stand up comedy routine which will coincide with a live album entitled “Casebolt Live and Uncensored” to be released sometime in the spring. Most of the source material will source from his twitter forays which can be found at @caseboltc9 . Be sure to check it out.
12/12/15 – The Blaney brothers, Dale and Dave, turned the sprint car racing world on it’s ear by announcing they’re leaving the sport they’re become synonymous with to become lucha-libre wrestlers for the AAA promotion based out of Mexico. AAA Head booker Konnan, in an exclusive comment to TDN mentioned “They’re going to be instant contenders in our midget tag team division. Viva la raza”.
12/16/15 – In an update to the Matt Sheppard scoop, he was released for the team for being too good at football to be playing in the NFC East. NFL pundits around the league agreed, except for Warren Sapp. He was too busy eating, chewing tobacco and figuring out how he could he claim bankruptcy for the 17th time this year. Matt has since announced he’s also going to AAA, to be the Blaney Brothers’ manager. In another exclusive comment to TDN, Konnan said “I have no idea who these gringos are. Viva La WCW”.
Be sure to check back as we’ll keep this page updated with fresh stuff and we’ll let everyone know when to check back!﻿