After mother nature wiped out hope of running Tuesday’s event as planned, the make up night provided another chance for Kyle Larson to pad his stats for the week. Larson jumped out to the early lead, but bobbled on lap 25 and Shane Stewart was right there to seize the moment, passing his car owner en route to the $5,000 victory.

And through two events, Dale Blaney leads the way in the point standings. The “Low Rider” has been among the best of the best, garnering a victory on Friday night and a fourth place finish on Saturday. Kyle Larson dominated night two following an early spin by Greg Hodnett, Larson inherited the lead and left the rest of the field in his wake checking out to a 5.1 second victory over Shane Stewart.

Passing was a bit hard to come by on Friday night as Blaney won from the pole, however on Saturday, the surface was fairly racy for Larson’s victory.  Early hard chargers include Roger Crockett and Danny Lasoski who both came from further back in the field and made fantastic forward charges on Friday and Saturday respectively. Look for either one to take one of the final three shows perhaps.

The action on the track heats back up on Tuesday night with a $5,000 to win show and finishes up with shows on Friday and Saturday night each paying $12,000 to the winner.

So, did you enjoy your few weeks of off season? Because the action is about ready to roll once again in the second annual Winter Heat Showdown at Cocopah Speedway in Somerton, AZ.  So who’s going to show up? What’s the place look like? How can I watch? Relax….you’re in good hands.

We’re going to set the scene for the sprint speed week that kicks off the racing season and give you the goods on the info beforehand so you can best plan to follow the action.

This event, now in it’s second year hearkens back to the days when sprinters from all over the place used to shake down their equipment and tune for the upcoming season at various dirt tracks in the Arizona and southwest deserts.  The concept went away for a while, but returned in 2015 in a grand fashion as 35 drivers ventured to Cocopah to partake in the inaugural event.

What’s at stake, is a nice purse and the opportunity for some drivers in new surroundings to get on top of their game for Florida. David Gravel, Joey Saldana and Paul McMahan debut new rides in 2016 will be there shaking down their new cars. But more than the practice and purse aspects, it’s a chance to see a decent variety of drivers from all over North America. This is no regional sampling, and includes WoO, All Stars, NSL and Central PA/ Knoxville Iowa cars as well as western and southwestern regional standouts!

If you’re going, be sure to take advantage of the side events, pit parties and live music happening every race day! Check out the entire schedule of events here

Okay, so it’s not a traditional one at work here. And it’s good to see some interesting twists as these nights will not feature time trials whatsoever! Drivers will pull randomly for heat starting lineups and then use passing points to line up another set of races (qualifiers) where the top passing point getters from the heats are inverted. Then, the total number of passing points are used to determine the starting feature grid straight up.

Part of the intrigue factor for fans that may want to make it a destination someday, is the fact that the facility and surface are beautiful and very racy, and also need we mention….there’s a casino, resort and conference center within walking distance! You can party, drink, relax take in some great racing, and never have to worry about getting anywhere! There’s literally every type of entertainment here imaginable plus elaborate hotel rooms and beautiful campgrounds all nestled in the mountains.

But we were talking about a race, now lets check out the track first and foremost! 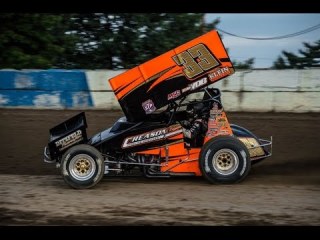 The first annual event saw Danny Lasoski capture the week long points title, winning a tiebreaker with Stevie Smith. The week saw southwestern 360 star Aaron Reutzel become a semi household name by competing well enough to start up front in most of the features only to succumb to bad luck. Still though, it was a performance to remember and he did manage a feature victory.

As previously mentioned, it’s a fairly complete field minus a Schatz here and a few others there. You’ll be seeing several outlaws, all stars, national sprint league guys and some ringers ala Christopher Bell, Kyle Larson and Rico Abreu.

So, you didn’t make plans to attend? No need to worry. Our good friends at SpeedShift TV have you covered. You can purchase all five nights of action for $99.95 or pay as you go for $24..95. It’s a great way to see some racing, kick back with a six pack of beer, and hook up a night of fantastic sprint car action on your big screen tv.  To order a broadcast or to check out the details: Click Here

Want a quality check, look no further, Speed Shift’s the goods when it comes to production quality…

What to watch for:

Keep it tuned to TDN too as we’ll have results and observations from Winter Heat Showdown Part 2!