Hey? Smell that? The pungent aroma of race fuel exhaust fumes combined with 15,000 fans all eating chili, indoors. It’s enough to make your eyes water! And your mouth as well (The chili’s legendary)!  It means the race for the coveted Golden Driller has begun, that magical week of the year when the eyes of Dirt Nation gaze upon the annual event in Tulsa, OK.

We’re not entirely sure who made the first #UslessChiliBowl hashtag. But it has stuck with the event on social media for a couple of years now. And since there are a lot of great publications that manage to put out a great preview, we decided we’d add our name to that list. Only we hope to conform to the hashtag with ours. So here it is, our Useless Chili Bowl Preview! Hope it gives you a little bit of insight. But it’ll completely live up to it’s name for some of you to as we choc it full of useless information.

For those not familiar, and we can’t imagine that most of you aren’t., we’re basically talking about over 300 midgets (No Abreu jokes or we’ll roll you in the parking lot!). They’re basically wingless mini sprint cars. Anyhow, the week basically breaks up into several qualifying nights starting on Tuesday night. These are full race programs ending with an Amain event. Only a select few are locked in to the big night which is Saturday, the championship night! On that day, the world’s largest alphabet soup starts around midday when transfer mains, starting normally near the letter Q or R, take up the majority of the entire day, leading up to the final Amain late Saturday night.

So why watch? Because it’s a great event. The racing is outstanding, and the mix of talent is almost unmatched anywhere in the world.

And also, there’s fights like this one between Shane Cottle and Brad Kuhn!

If you’re a new to the Chili Bowl, you’ll also see a ton of pictures featuring legendary builder owner Keith Kunz throwing his arms up in the air.  Also, be fully aware of the term “Flip Count”! This is the number of times throughout the week that cars have flipped on their lids so to speak.  You can play incredible drinking games with the flip count, and also place side over/under bets on a particular night or for a whole week. You might even win enough betting to cover the cost of your pay per view!

Practice starts on Monday, and qualifying night’s run Tuesday through Thursday. Each driver has a specific qualifying night. The drivers come from all over the world, and will be competing for a start in the final Amain on Saturday where they can win $20,000 bucks or so. Here’s some big names you may actually have heard of, and the night’s they’ll be competing. 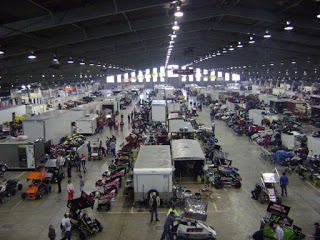 Team “What the hell are they doing here!”:

These guys not only come from all over the world, but from different backgrounds. Here’s some guys that ordinarily prefer at least two fenders if not more. If you’re not a true sprint/midget diehard, you can engage in the event and see how these guys do. Keep an eye on Tim McCreadie who is a former champion and always a contender.  But remember, it doesn’t always go well for these guys either, both Scott Bloomquist, Jimmy Owens, and Brett Hearn were less than stellar in their appearances.

As for Saturday, You’ll be able to watch live on MAVTV Network.

Can’t get MAVTV for Saturday? Sign up and watch online here

And when we shook our magic 8 ball, we came up with pretty much who you came up with. Abreu, Larson, Clauson, Bell..etc. But keep an eye on last year’s rookie of the year Parker Price Miller, and also on people like Dave Darland, Robert Ballou, Tracy Hines. and warm up winner of the Tulsa Shootout, Brady Bacon.

At the end of the day, here’s who the fantastic staff here at TDN gave for predictions:

Make your bets accordingly, and if you end up losing some of your kid’s tuition fund, don’t blame us!