Lost in all the delirium that took place on Saturday night in Tulsa, after one Rico Abreu had put the finishing touches on putting a 300 plus field of amazing drivers in their midgets to bed, was an inevitable truth.  The fact that we’re going to be seeing less and less of him gracing the clay. It started setting in on or about his 10th victory donut, and it hasn’t been any easier to deal with. 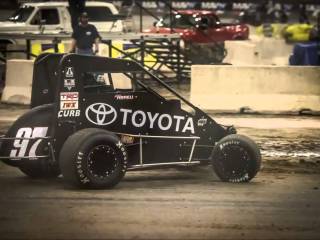 It’s not that he doesn’t want to be duking it out on bullrings from coast to coast. It’s simply that there’s a better opportunity awaiting him. And he earned that to say the least. And it should be a happy time to be an Abreu fan. Nevertheless, the donuts and subsequent jump into the arms of an awaiting Bryan Clauson, were bittersweet. They served as a reminder that the party will be going to the asphalt quicker than many of us were ready for.

“Here for a good time, not for a long time.” is an expression commonly used in today’s world, and it appropriately applies to Abreu on his rise to the next level.  And there’s several reasons why he’ll be missed very badly.  His story is unique. He was a natural talent that wasn’t realized until later on in his life. His personality has a specific charm, and it’s not got to do with his height. If Abreu were six feet tall, he’d be much the same person. The guy who doesn’t mind stopping by elementary schools to talk to children about bullying. The individual who risks life and limb to rescue drivers in distress if the worst should happen in front of him.  He’s the proverbial racers racer.

But more than that, and perhaps the biggest reason we’ll miss seeing him at the dirt track in the coming years, is that he drives with such passion, and puts the car in places where few would dare, and does so cleanly. He’s a one man show some nights. It’s evident at the chili bowl for sure, but also on a regular USAC or WoO night too. It matters not what the purse is, Abreu takes chances and let’s it all hang out with reckless abandon that is never over the edge, but right on it. He’s quite possibly the most entertaining driver in terms of “wow” factor many of have seen in recent memory. And his style takes us back to the days when more drivers seemed to be more gutsy, more risk taking, and were cut from legendary stuff.

And he unites fans of divisions as perhaps no driver has done recently. Look no further than the World Finals, where a good many modified, late model, and sprint fans among the 12,000 strong start the Rico..Rico..Rico chant. It may be an impossible thing to find a diehard Abreu detractor among dirt fans.

He’ll be driving NASCAR trucks full time in 2016, and although he may get the chance to run some dirt events here and there, the path for Abreu looks like a clear shot to the top series, sooner rather than later.  It would be selfish for us as dirt fans to want to keep him in front of our eyes only too. To quote the Shawshank Redemption,

“Some birds are not meant to be caged. Their feathers are too bright, their songs too sweet and wild. So you let them go, or when you open the cage to feed them they somehow fly out past you. And the part of you that knows it was wrong to imprison them in the first place rejoices, but still, the place where you live is that much more drab and empty for their departure.”

So it will be with us and Abreu. And we wish him well, and perhaps, it may give some of us a reason to tune into NASCAR again. But there’ll be a hole where he used to be. It’ll be filled with another talented driver to a certain degree. But the character, personality, and style….Rico will be forever the owner of.