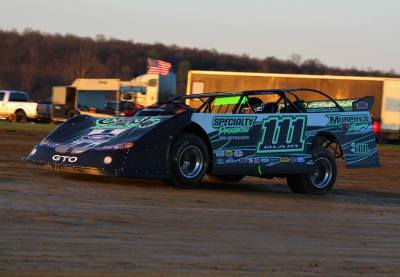 Hey there folks. It’s Monday, so that means it’s time for me to update these standings. With the beautiful weather all weekend*, you’d figure that tons o’ points would be scored this weekend, right?

That’s not the case, though.

Dog Hollow and Lernerville got their shows in Friday, but Bedford didn’t have supers scheduled due to Appalachian Mountain Speedweek.

Saturday, PPMS and Marion Center got their shows in. Roaring Knob and Port Royal also gave supers the night off, presumably for the same reason Bedford did. Selinsgrove didn’t race until Sunday, and by the rules I set for this year’s poll, that means no points were scored. I know I’m scoring specials with an expanded point system this year, but I will only score those specials if they’re on a track’s regular race night, so not points at Selinsgrove.

Sunday, Eriez got their show in.

All that said, obviously, the top spot didn’t change, but the poll overall got a lot tighter. Find out how…

1. Max Blair**, 25 points. Max didn’t score any points this week, but he did have a pretty successful weekend at non scoring tracks. He won at Little Valley Friday and Stateline on Saturday, but came home 19th at Eriez Sunday.

2. Alex Ferree***, 23 points. Alex had a very succesful weekend, winning at Lernerville Friday, and backing that up with a win at PPMS Saturday at the Herb Scott Memorial.

2. Jared Miley**, 23 points. Jared scored his points this week with a fifth at PPMS Saturday. In non-scored races this weekend, he got the win Friday at Hesston.

6. Mike Blose*, 15 points.  Mike was fourth at Dog Hollow Friday and picked up the win Saturday at Marion Center.

6. Michael Lake** 15 points. Michael was fifth at Lernerville Friday, I didn’t see his name in any other results this weekend.

8. Jeff Rine*, 14 points. Jeff didn’t pick up any points this weekend, because he was following the AMS tour. He got second at Hesston Friday, 21st at Hagerstown Saturday, and fifth at Selinsgrove Sunday.

8. Dylan Yoder**, 14 points. Dylan didn’t score any points either. Much like Jeff Rine, he followed the AMS all weekend. He got sixth at Hesston Friday, 23rd at Hagerstown Saturday, and tenth at Selinsgrove Sunday.

10. Rob Blair*, 12 points. Rob got a second at Eriez last night for his points this week. In other non-scoring action, he ran sixth at Stateline on Saturday.

10. Matt Lux*, 12 points. matt’s points this week came from at fourth at Lernerville Friday. I didn’t see his name in any other results this weekend.

And that’s the top ten for this week. As always, check back next Monday to see the update.

*Yes, the weekend was beautiful, including Saturday, where Mercer cancelled. Seriously, yes, they cancelled due to rain. Not a drop fell. I know it doesn’t have anything to do with this poll, but seriously, they have to be called out on that bullshit. The owner claims he’s “not going to lose money anymore”, but you’re never going to make a dime if you never race.. idiot. Sell the place to somebody who actually gives a damn.