Underneath a beautiful sky, the mid season championships took center stage at Lernerville Speedway on Friday night, and with it came the guaranteed starting spots to four important future events for all four feature winners. And for two drivers, the added incentive couldn’t have come at a better time as Carl Bowser and Mike Pegher Jr. each turned around a miserable season with a feature win that put them in the show for the Don Martin Silver Cup and Firecracker 100 respectively. Canadian sensation Mat Williamson also put the skills on display picking up his fourth win in five weeks in the Diehl Automotive Dirt Car Modifieds, and Terry Young found victory lane for the second time in three weeks in the Millerstown Pic-A-Part Sportsman.

For most of the young season, the modifieds had treated fans in attendance to some of the most hotly contested and caution free features of the season. They provided more than their share of edge of the seat moments for fans in attendance at the action track. But this night…was not exactly one of those as Mat Williamson took the trophy back to his native Canada for the fourth time in five weeks in a caution marred feature event.

Jimmy Weller III and Brian Swartzlander brought the field to the first of many green flags as Swartlander darted out to the early advantage as a formidable chase pack formed behind him consisting of Garrett Krummert, Jeremiah Shingledecker and Kevin Bolland. But the action was halted early when a lap two tangle between last week’s runner up, Mike Maresca, Mike Turner and Mark Frankenhouser reset the field.

Bolland exited the scene on the restart when his car broke something in the front end, causing his night to come to an end while in between yellow flags, Shingledecker and Krummert looked to provide the stiffest challenge to Swartzlander.  Following a lap six caution for a Rick Regalski and Shawn Kozaar tangle in turn two, the race finally picked up some momentum. Following the restart, Swartzlander looked to be in command as the stretched out a fairly comfortable lead up on the top of the speedway. But behind him, lurked Williamson, who had made use of the restarts to get within striking distance as the race progressed.

At the midway point, Swartzlander had all he could handle behind him as Shingledecker had made up significant ground and began to challenge for the lead. Shingledecker would eventually find one great oppportunity on lap 16 when he went to the bottom of the surface in an attempt to dive underneath the race leader. But the maneuver came up just short. Swartzlander looked to be headed straight for lapped traffic when the yellow flag waved once again on lap 17.

On the restart, Swartzlander elected the top side but managed to slide up and over the cushion coming out of turn two which opened the door for Shingledecker and Williamson, and the latter of the two went right through to the lead on lap 19.  But once there from his ninth starting spot, Williamson had to deal with two pivotal restarts in the waning moments, but was able to keep the field behind him on both occasions to collect the victory.

“It’s tiresome,” Williamson said. When you get up front like that, you don’t want to see a caution, but it also helps you get to the front. It’s kind of like a double negative, you wish some guys would settle down a bit and we could get some laps in because fans don’t want to sit through yellows. We always want to put a good show on, and tonight I don’t think we did.” 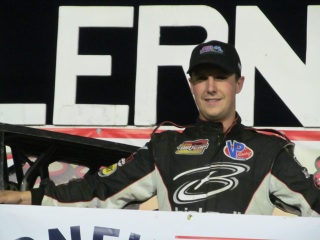 Unexpectedly, the season had been a lost one of sorts for Carl Bowser. The former Lernerville sprint car champion had found himself on the end of bad luck and plagued mechanical gremlins. But with a new car and a favorable starting spot in the twenty five lap feature event, Bowser found himself with an opportunity to turn his season around and took advantage of it with a convincing performance.

Scott Priester started on the poll, but failed to fire on the initial green flag, altering the course of the race Ohio invader Shawn Velnti, a much improved Dan Shetler and Davey Jones were collected down the front stretch.   Once action resumed, Bowser went to the top of the track with authority qne looked to be in complete control in the early going.  Behind him, Jack Sodeman Jr. and Brandon Matus occupied positions two and three as Bowser began to enter his first round of lapped traffic at the five lap mark and he navigated through it as smooth as could be slicing and dicing between cars high and low.  Sodeman Jr. meanwhile, was able to follow him through and looked to find bite on the low side of the speedway.

By lap 13, Sodeman Jr’s new line was working like a charm, enabling him to get close enough to Bowser to attempt a slide job for the lead on lap 13 which came up short and almost cost him several positions as he nearly went over the banking. The lack of lapped traffic and Sodeman Jr’s miscalculation meant that Bowser was back in clean air as he built up a sizable lead over Sodeman Jr once again.

With 20 laps in the books, Bowser found himself once again approaching heavy lapped traffic, but Bowser needed to use none of the lappers the rest of the way as his lead over Sodeman Jr was a substantial one. It was the first win for Bowser since last season, and he emotionally explained what brought  about the success following the feature event.

“We just found a few things recently,” Bowser said in victory lane. “Two weeks ago we just left after the heat races we were so bad. So we went home that Friday night an built a new car and it’s just really been the difference. We just brought out a new J & J and every time we get one of their cars and we put it together and they go on the race track and do what we did here tonight.” 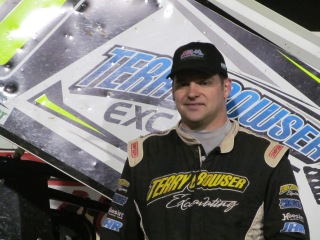 Mike Pegher Jr. found himself in almost identical circumstances to Bowser when the night began. And, like Bowser, he found a way to put the negative start to the year behind him in an effort that saw him overtake some stout front runners en route to his first victory of the 2016 campaign.

Russ King looked to be in charge in the early going as he quickly assumed the lead followed by Alex Ferree and Pegher Jr. Then action was then brought to a halt on lap two when Mike Miller spun in turn two.  King’s restart was perfect once the action resumed as Pegher Jr. slid underneath Ferree to take the second spot away. Behind them a pack of pursuers formed as Michael Norris, Dave Hess Jr. Matt Lux and Kenny Schaltenbrand set to hunt down the top three.

King then found himself amongst the lappers on lap three as Pegher Jr. was close behind and the traffic helped him find his way around King on lap 11. Once in the lead Pegher Jr. began to stretch out a comfortable margin while making his way forward was Hess Jr. who had climbed from his 11th starting spot to fifth.  However the issue of who would take home the coveted Firecracker 100 starting spot looked to be a forgone conclusion as Pegher Jr. kept setting a torrid pace with the laps winding down.

Mike Miller then brought out the caution for yet another spin on lap 17, resetting the field for one final time.  But on the ensuing restart, Pegher Jr. pounded the top side of the speedway with authority, leaving only the matter of the remainder of the podium spots in doubt. Hess Jr. made the most of the restart and found himself in second position, but in the end, the night belonged to Pegher Jr. who got the monkey off his back as he cruised to victory with ease over the remaining laps.

“We’ve had nothing but bad luck this year,” Pegher remarked upon winning his first feature event of the season. “Some of it was my fault, but I really have to thank my car owner Lynn Geisler. I’ve cost him a lot of money here lately but he shows up at the shop with me, helping me get the car together and if it wasn’t for him…we wouldn’t be here.”

If the first half of the season has taught fans in attendance anything, it is that Corey McPherson , Joey Zambotti, and Terry Young seem destined to do battle to the very end. And it’s going to be amazing to watch. But on this night, it was Young’s turn to rule the field as he checked out to a large margin on the way to his second win of the season.

From the drop of the green flag, the sportsman feature looked to be a two car battle between the hottest drivers in the division.  Terry Young started on the poll, but starting fourth was division points leader Cory McPherson, and it did not take long for him to make it a two car battle in the first few laps. Behind them, Aaron Easler, McPherson and Joey Zambotti began their pursuit as Young sought the bite at the top of the track while Easler and Zambotti kept their sights a little lower on the surface.

McPherson was able to make his way around both of them by lap nine and set his sights on the leader while Easler and Zambotti continued to do battle for the third spot. But in the second half of the race, all anybody could do was watch and admire, as Young made no mistakes to capitalize on the rest of the way. Tyler Dietz moved forward from his 11th starting spot to finish fourth as the race’s hard charger, but Young could not and would not be caught as he toook his second win in three weeks

“I knew if I kept making mistakes running into traffic that Cory (McPherson) would be along any second, but I never did see him again so that’s always good when you don’t see Cory out the door,” Young said. “This is what it’s all about right here, getting the picture take with your kids, everybody loves it, the crew loves it, they all come to the garage and they deserve to be up here.”

The Dirt Network The Story From Lernerville; Williamson Makes It Four Out of Five; Bowser and Pegher Earn Hard Fought Wins; Young Owns Sportsman
Loading Comments...
%d bloggers like this: