A fab four of another kind took to the action track on Friday night at Lernerville Speedway, and they provided four amazing feature finishes that kept fans on the edge of their seats. Harrison, Ohio’s Justin Owen used a late race restart to make his way around Shawn Westerfield who looked as if he was primed to collect the win in the Buckeye Outlaw Sprint Series feature event, while Bryce Davis tamed a stout field of RUSH Late Models en route to victory lane in their touring series event.  In RUSH Sportsman Modifed action, Nick Ritchey held off a strong challenge from Chas Wolbert and in the Millerstown Pic-A-Part Sportsman, Bob Egley found victory for the first time in a long time as he pulled of the pass for the win in the waning laps.

It looked as if it would be smooth sailing for one Shawn Westerfield for the largest part of the 25 lap B.O.S.S main event, But it proved to be a rough finish for the 2015 champion as his lead was taken away with the laps winding down in what would become one of the most thrilling feature finishes of the season.

Westerfield brought the 22 car field to the green flag and quickly stretched out an early lead in the opening laps, while behind him, Arnie Kent, Carmen Perigo, and Dustin Smith battled furiously for the second spot while Westerfield got away. When the order sorted itself out, Perigo found himself in control of the position. Meanwhile, local standout Jack Sodeman Jr began his assault on on the front runners with a fast car and lots of career laps at the action track under his belt.  By lap six, Sodeman made his way around Smith for the fourth spot and went straight to work on Kent for third. Kent would hold on for the meantime, but at the same time, Westerfield was setting a torrid pace up front, putting as much as six seconds between himself and the second running Perigo.

Westerfield looked well on his way to lapping half the field in the first half of the race as he calmly eased through lapped traffic he encountered on lap 10.  Perigo and Kent made their way through the best they could, but still could not find a way to whittle down Westerfield’s commanding lead, until the caution flag emerged on lap 14 for Andy Feil who lost a wheel. On the ensuing restart, Westerfield still looked the man to beat as he pulled away once again, however for as comfortable as he looked out in front, he was being stalked without knowing it by Justin Owen and AJ Flick who both methodically advanced forward for the length of the race from their 10th and 16th starting positions respectively.

All progress was halted once again on lap 17 when Gale Ruth Jr brought out the yellow flag, and on the ensuing restart, Perigo got an outstanding jump and made his way around Westerfield. The pass was erased by another caution before the lap would count, but indicated to those on hand that Westerfield could be dealt with somehow.   Once the race got back underway, Sodeman Jr made his way around Perigo for second, but he was unable to hold the spot as Perigo got back around him just two laps later.

The shape of the race changed dramatically on lap 22 when tour regular Cooper Clouse endured a series of bicycle flips behind turns three and four which brought out a lengthy red flag period. But the real race within the race was just taking shape. Once the green flag waved for the final time, Westerfield got a decent start but Perigo, Owens, and Flick found themselves with the leaders, and just one lap later, a four car battle for the win erupted between them. Owens, made the move to the inside and made his way around  and made the pass with just one lap remaining to collect his first career B.O.S.S victory, barely holding off the hard charging Flick and others in the process.

“I just wanted to protect the bottom in one and two, and not fall off the track in three and four tonight,” An emotional Owens said in victory lane. “I just tried to hold on the best I could, I just can’t believe it!”

John Mollick brought the star laden field of Rush Late Models to the green flag and quickly put himself in control in the early going, setting a fast pace as he worked the top of the speedway. Behind him, Daryl Charlier kept him in his sights while a pack of pursuers including Bryce Davis, Jason Knowles and Kyle Lukon attempted to keep Mollick in their sights.  Mollick looked like the man to beat as the 30 lap feature neared the halfway mark as he entered his first lapped traffic on lap seven, but while he attempted to make his way through, Charlier and Davis began to creep up on the leader.

Davis made his way underneath Charlier on lap 11 and set his sights on Mollick, taking a look underneath the leader when he found an opportunity, but Mollick resisted his charge for the meantime until a caution slowed the action on lap 14 as Lukon and Pegher made contact.

On the ensuing restart, Mollick elected to go low, and paid for the bad decision as Davis was able to take advantage of the momentum coming off of turn two in a wild four car battle for the lead to take the front runner spot. Davis then began hammering the top of the speedway with authority with Knowles not far behind, and Lukon who began to challenge Knowles for the second spot. Lukon would overtake Knowles on lap 19 and began his charge to a battle position with Davis for the lead.

With seven circuits to go, Davis found himself in heavy lapped traffic as Lukon began shaving tenths of a second off Davis’ lead every lap, but Davis was cool, calm and collected and split lapped traffic twice en route to a fairly comfortable victory while behind him, the remainder of the podium contenders could not find one more pass to advance their position as the checkered flag fell.

“It really means a lot to win at a place of this caliber, I’ve always wanted to win at a place like this, it’s a dream come true,” Davis said. “I got pretty worried on that one restart with John (Mollick). But coming down the front stretch, he tried getting to the top and I wasn’t going to let him get there. I thought all four of us were going to wreck but I’m glad we all got straightened out. This is our fourth or fifth year in this class and our guys are still learning and I’m still learning how to drive different tracks, but they do a great job.”

Chas Wolbert and Tiffany Williams comprised the front row in the 20 lap RUSH Sportsman Modified feature, and when the green flag flew, Wolbert seized the opportunity to take the lead while Williams went in the opposite direction.  Behind him, Nick Ritchey, Kyle Martell, Chelsie Kreigisch and previous feature winner Kole Holden began their chase of Wolbert.

Wolbert worked down low on the track and with purpose as he found himself in a furious dogfight with Ritchey to keep the lead until the caution flag came out on lap seven for debris. When action resumed, Holden was able to get around Martell for third as Ritchey went to the top side of the surface to overtake Wolbert on lap nine, and looked to be in complete control of the race, even as heavy lapped traffic approached which send Wolbert back to the bottom groove.

Ritchey looked to have the victory all but in the bag, until lap 19 when with one lap to go, Steve Slater brought out the yellow flag for a spin. On the following restart, Wolbert appeared to make the pass for the win, but it was erased by another caution  when Joshua Sippel and Slater tangled in turn two.

Wolbert had one final crack at the win, but on the final restart, Ritchey slammed the door and finished off the victory, his first at Lernerville since the Steel City Stampede in 2015.

“I can’t thank my crew enough,” Ritchey said. “I figured I would try the bottom on that last restart and that didn’t work. I had run some debris over during that first caution and it hit the front of the car and I was hoping I didn’t get a flat tire, but it all worked out tonight.”

Up until this point of the season, Tyler Dietz had not had any manner of luck with pill draws. But on this night, he pulled redraw position number two and he wasted no time assuming the lead once action got underway. Two time feature winner Joey Zambotti took up the second spot and held it fairly firmly in the early going as behind him, Bob Egley, Aaron Easler and a hard charging Cory McPherson made up a formidable pack of drivers.

Up front, Dietz, running mostly on the bottom, was stretching out a fairly wide lead up until the halfway point, when Egley started to make his move toward the front. He made his way around Zambotti for second on lap eight, and then patiently set his sights on Dietz who was beginning to feel what was coming up from behind him, if not whom. Egley then proceeded to throw the kitchen sink at Dietz with the passion of a driver that hadn’t visited victory lane in quite some time. With lapped traffic becoming a factor, Egley began to run down low in turns one and two, and move to the top shelf in turns three and four, and the line switch worked.

With four laps to go, Dietz found himself with two lapped cars side by side in front of him, and a whole bunch of Bob Egley behind them, when the yellow flag came out on lap 19 for a Mike Bordt spin. Dietz elected to run down low on the restart, and once the action resumed, Egley got a very strong run in turns one and two that allowed him to carry momentum on the top side that carried him past Dietz, who came up short in heartbreaking fashion. Once Egley made the pass, he never looked back as he collectd his first win of the season at Lernerville. 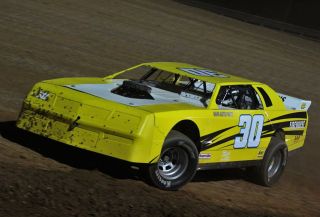 “I didn’t think I was ever going to get back to this place,” Egley said making reference to his first trip to victory lane following a lengthy absence. “The competition is so tight right now, there’s ten different people that can win it here on any night. It’s a lot of fun. I didn’t think I’d like the crate motors, but I’m starting to get used to it now.”