Fab Four racing action returned to the the forefront on Friday night at Lernerville Speedway, and in a thrilling way on a surface that was racy as could be. The night on clay had a nostalgic twist to it as evidenced by some classic cars from years gone by that were on hand for fans to view, but also in the way that three of the four feature winners played large roles in Lernerville’s history.  Brian Swartzlander, Jack Sodeman Jr. and John Flinner, all drivers who have garnered either multiple track championships or are firmly entrenched in the all time feature winners list, each found victory lane rather befittingly. And perhaps joining them one day years from now in the all time upper echelon, Joey Zambotti continued his impressive season with yet another feature win.

Having victory slip from his fingers in frustrating fashion several times this year thus far, Brian Swartzlander came into the evening in desperate search of win number one. But in stark contrast to those feature losses, his win on this night was in a dominant fashion, evoking memories of wins in prior years when he simply could not be caught and was in a league of his own.

Swartzlander started alongside pole sitter Rick Regalski in the 25 lap feature event and wasted no time taking control of the race in the early going as Rex King Jr. and Garrett Krummert both made their way around Regalski to take up positions behind Swartzlander.  After a lap four caution for Steve Feder who spun in turn four to avoid making contact with another car, the top three managed to gain a healthy separation from the rest of the field, each electing to use the top side of the speedway.

Behind them, Mat Williamson who started on the final row by virtue of his three straight feature wins in the previous weeks was picking up spots left and right and had worked all the way up to the eighth position when the caution flag came out again for a lap nine spin from Jimmy Weller III.  Once action resumed, King took a look underneath Swartzlander, but could not offer a serious challenge in his bid to take the lead as he engaged in a battle himself for the second spot with Krummert who appeared to have a very strong car working for him. 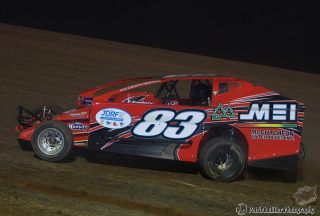 Williamson’s bid to make it four in a row took a turn for the worst when he bobbled on the cushion in turn four which cost him two positions and placed him in a battle with Jeremiah Shingledecker, Rex King Sr., and Dave Murdick.  Meanwhile, Krummert was able to get around King for second on lap 20 as he manuevered underneath in turn two to take the spot.  But the night belonged to Swartzlander who consistently his his marks running the top side the whole night, outclassing the field on hand on his way to victory lane for the first time in 2016.

“Starting up front helped a heck of a lot tonight, believe me,” Swartzlander remarked. “We’ve been working really hard on this car, this is a new Teo that we’ve brought out about four or five times and it worked really well. We’re still struggling a bit with the motor, but we got out front tonight and didn’t want to see any cautions, it just all worked out tonight.”

There should be a meme that exists, fashioned after the Dos Equis variety, and in it should reside a picture of one John Flinner with the caption “I don’t always go to Lernerville, but when I do, it’s never a boring night”.  Flinner was on hand on this night and made his presence felt almost immediately in the super late model main event.

Andrew Wylie and Mike Pegher Jr brought the field to the initial green flag and it was Pegher Jr out to the early lead with Flinner moving up through the pack very quickly from his sixth starting spot. After an early caution for Tommy Schirnhofer re racked the field, Flinner found himself running second behind Pegher followed by a chase pack consisting of Michael Norris, Michael Lake and Alex Ferree.  Following a caution for a Todd Bachman spin on lap seven, Flinner found the opportunity to seize the lead from Pegher on the restart as he dove under the leader entering the front stretch. The two drivers made contact all the way to turn one, but both drivers kept control as Pegher would win round one retaining the lead for the meantime. Meanwhile, Russ King and Lake engaged in a see saw battle for the fourth spot with Norris running third. Out front, Pegher desperately tried to make use of the clean air available to him in an attempt to drive away from Flinner, but he could not gain any separation as the battle for the lead heated up with lapped traffic just in front of the leaders.

All position battles were halted though when Lake made a terrific save to keep his car on the surface after he bicycled in turns three and four on lap 15. After a restart and another caution for Gary Lyle one lap later, Flinner went about the task of making his way around Pegher as he wound up his momentum in turns three and four and threw a slide job exiting the final turn on lap 17 that cleared Pegher, though Pegher would make contact with the wall and come to a stop.

Flinner elected the outside on the restart following Pegher’s caution and would not be challenged the rest of the way as Ferree and Norris battled for the third spot with King taking up the second position. The win was Flinner’s first of the year at Lernerville and bore an eerie resemblance to a late season victory and battle with Pegher towards the end of 2015. 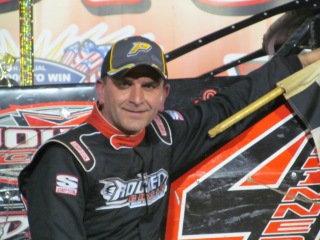 “I want to thank all those that boo me the most because they like me the most,” a candid Flinner said post race. “I ran a clean race and got run over but I guess they don’t like it when it’s the other way around. I only got like one guy, I basically work on this car all week by myself, maybe some of the ones that boo me can come help me out, I’m in the shop every night until three or four in the morning.”

From the outset, it looked to be a new winner kind of night for the People’s Natural Gas Sprints as Brandon Matus, Alex Paden and Dan Shetler all started in the top three spots, and were all either due for a win, or had been very impressive at various moments this season, but had yet to wind up in victory lane. However one Jack Sodeman Jr. had other ideas.   When the green flag fell on the feature event, it was put away almost as quickly as it was brought out as Paden spun in turn two in front of a field of oncoming cars, making AJ Flick’s night all the more difficult as he stayed away from impending doom, but fell back three positions to ninth in the early going.

Once action resumed, Matus took charge of the race using the bottom of the speedway in all four corners while Shetler settled for the high side. The two leaders gained separation from the rest of the pack in the early laps as Sye Lynch and Sodeman kept Matus and Shetler in their sights. Matus encountered heavy lapped traffic on lap seven but was able to switch to the top groove and pick around until Clay Riney brought out the yellow flag with a spin with eight laps in the books.

On the following restart Matus took the high road and stretched out a sizable advantage over Shetler, but Sodeman had been driving like a man possessed and wove his way through the pack from his ninth starting spot and would begin to challenge Shetler for the second position at the ten lap mark. Also driving like a man on a mission was Flick who moved into the top five after losing ground early on. 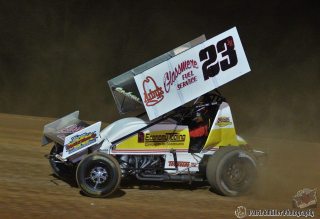 The momentum of the race was halted again on lap 15 when Davey Jones lost his left rear wheel and once it resumed, Matus found himself in clean air, however Shetler who’d driven a fairly flawless race was being reeled in by Sodeman who took some looks to the outside of Shetler before making the pass for the position on lap 15 and then made his way underneath Matus for the lead just one lap later. But the fastest car on the track belonged to Flick in the later stages and he made his way around Shetler and Matus for the second position with just six laps remaining.

With precious few laps to spare Flick made a furious bid for the lead on lap 21 as he entered turn three and appeared to have the position after a slide job in turn four but caught just enough cushion to send his car next to the front stretch wall flipping twice which brought out the red flag. When the race got back underway, Sodeman sprinted out to the lead once again, and Sye Lynch made his way around Matus for second and ran out of laps in his attempt to hunt down Sodeman for the win.

“What better could you ask for than to have the throwback car out here and get it in victory lane on nostalgia night,” Sodeman said. “You’ve got a Flick and a Sodeman battling back and forth for the lead and you’ve got a Matus in there, it’s kind of like having the next generation of nostalgia night tonight and it kind of works out nice, it’s awesome to be here.”

When Corey McPherson starts on the pole in the sportsman feature, it’s normally a great bet he ends up in victory lane at the end of 20 laps. But on this night, the surface contained more bite than normal and all grooves were available. Joey Zambotti knew this as well as anybody, and used it to his advantage en route to this third victory of the season. 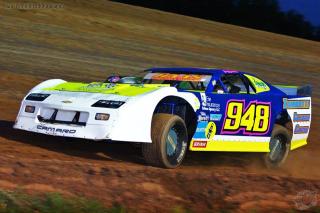 McPherson took the early lead before a turn four spin by third starting Brett McDonald on lap two set off contact that ended Joe Kelley’s and Pat Hanley’s evenings prematurely as each had no where to go in the ensuing melee.  When action resumed, McPherson headed straight for his office at the top side of the track and was in command in the early going while behind him a fierce battle between Bob Egley,  Paul Schreckengost and Zambotti developed. Terry Young and Shreckengost then brought out the caution on lap eight and on the ensuing restart, Zambotti went under McPherson for the lead as Jim Fosnaught moved into the third position.

The caution flag waved for the final time on lap 12 with Zambotti electing the low side on the speedway for the restart which he used to keep his advantage, albeit a slim one over McPherson who started to inch off the cushion, moving lower towards the better bite on the surface while Aaron Easler began to move into a battle position with McPherson, looking underneath him for a way around as the laps wound down. As the last lap unfolded it was anybody’s race as the top three remained very close to one another, but at the end of 20 laps, Zambotti held on to collect the win.

“It was a clean race and that’s what it’s all about, we can go 20 laps with minimal bumping and clean passing, there’s really nothing better than that,” Zambotti said. “The last couple weeks have been up and down for us. we completely went back to the drawing board, took all the weight off the car and changed everything around and we finally have something that’s working.”