Four features, four forgone conclusions. Not so fast.  On a night when the weather assisted a surface that held it’s grip throughout every main event on Friday night, the likeliest outcomes turned themselves upside down as each early leader succumbed to misfortune or an opportunistic pass at the perfect moment.  In the Precise Racing Products Late Model, Mike Pegher Jr looked to be in command early, but Micheal Norris inherited the lead and never looked back. Meanwhile, in Diehl Automotive Modified action, Rex King Jr looked primed for victory until a late race caution gave Brian Swartzlander a new lease on life.  Carl Bowser looked as if he’d have a hard time running down Brandon Spithaler with only eight laps left when Spithaler jumped the cushion, giving the lead and win to Bowser. And in the Millerstown Pic-A-Part Sportsman, Tyler Dietz worked tirelsessly to make his way past a determined Noah Brunell as the laps wound down.

We can truly say that the hex has been removed, that the bad luck has lifted. Michael Norris most likely feels the weight of it off his shoulders and then some these days. The young pilot’s fortunes have improved since a first half of the season that saw multiple dnf’s and on nights when his car looked to be among the strongest in the field nonetheless. Norris took his second victory in his last four starts on Friday night and the other two finishes in the stretch, saw him on the podium at the end of the night.

Mike Pegher Jr started on the pole and assumed the early lead as Norris made his way around strong running Joe Martin in the early stages of the 25 lap main event. The top two put some separation between themselves and the rest of the field in the early going while behind them, Martin was dealing with all he could handle as Matt Lux, Russ King and Jared Miley were on the move in the early going. Pegher would find his first taste of lapped traffic with seven laps down and made an attempt to clear the soon to be lapped car of Clayton Kennedy when they made contact sending Pegher into a spin down the front stretch and in front of the oncoming field and ending his night in the process.

Once action got back underway,  Norris was faced with the pack of Martin, Miley, King and Lux. To secure the win with a formidable pack behind him. Norris would have to be fast, and he pushed the limits of the surface and machine the rest of the way, running some of the fastest laps in Lernerville Late Model history in the process. Martin then sailed of the top of turn two with 13 laps down to bring out the caution flag. And when the action resumed, Alex Ferree had worked his way forward from the tail of the field, due to the use of a back up car, to fifth place, adding to the wealth of talent behind the leader.

Norris was unfazed however and picked up the pace with precision in dealing with hitting his marks. Norris had to survive two restarts down the stretch, but calmly picked up right where he left off both times as Lux, Miley and King were left to fight it out for the remaining podium spots. But the night belonged to Norris who was simply the best on this particular night and had nothing but clean air in front of him in the final laps to work with.

“I’m just glad to be in victory lane tonight,” Norris said. “Driving on a track like this, it’s fun but it makes it hard to pass lapped cars and it’s really hard on the equipment. 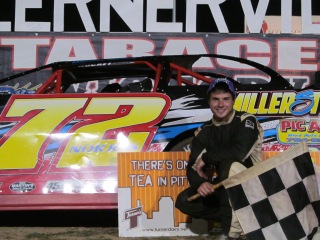 Brian Swartzlander’s first half of the season was almost identical to that of Norris, and the second half has been a similar story as well.  Swartzlander had his hopes for a win dashed twice in the early part of the season by late race cautions that allowed Mat Williamson to make his way around just before the checkered flag fell. But on this night, Swartzlander was the recipient of some well deserved caution karma himself.

Rex King Jr and Tom Winkle brought the field to the green flag as King made for the top of the speedway from the get go and Swartzlader made his way around Winkle before the circuit came to a close.  Behind them, Jeremiah Shingledecker and  Dave Murdick rounded out the top five.  King started to encounter lapped traffic on lap four as both he and Swartzlander gained some breathing room from the field, and as the race approached the halfway point, King had begun to put distance between himself and Swartzlander as he looked to be in control of the outcome. With the field well strung out, a caution might be all that could have kept King from victory lane, and that caution happened on lap 14 when Murdick slowed to bring out the yellow.

On the restart, King kept the lead while Williamson, coming from his mid pack starting position, had joined the battle, aided by the caution himself.  He made his way around Shingledecker for third, and looked to be mounting a serious charge towards his eighth win of the year. Meanwhile, Swartzlander was taking advantage of his new lease on life and slid up in front of King in turn four to take the lead.

With two laps to go, Williamson dove under King to take a look, but was unable to make the pass, while out front Swartzlander hit his marks, stayed the course, and finished the job, collecting his second win of the season in the process.

“We got side by side down the front straight and I came out and I was really surprised that I didn’t see him up there so I went up top and he came back with a good run on me but he have me roon,” Swartzlander said in victory lane. “It was a good, clean race and it was fun. I really wouldn’t have got him if it weren’t for that caution, he was getting away from me a little bit, but we’ve lost a few to cautions and we got one back here tonight. We’re really starting to get this new car dialed in and the crew’s been working good.”

Brandon Spithaler’s night looked like it would be one to remember past the halfway point of the sprint feature. In control of the race, Spithaler seemed unbeatable save for an approaching Carl Bowser with precious few laps remaining. And one slip later, Spithaler’s hopes were dashed.

Spithaler jumped out to the early lead from the pole while the red hot Dan Shetler who’d been one of the fastest cars in the field week in and week out began his pursuit followed by Bowser and Sye Lynch. Shetler then found himself battling Spithaler for several laps in the early going, working just one groove lower than Spithaler’s was, situated at the top of the surface. Behind them, AJ Flick, still mathematically alive for the track championship, had made some forward progress from his tenth starting spot as he found himself running fifth at the four lap mark. Flick would go over the banking in turn two and dropped several positions however, making his job that much more difficult.

The yellow flag then came out for Tyler Salisbury who had a flat right rear with six laps in the books.
Once action resumed, Lynch was eliminated from contention as his car came to a stop on the back stretch and a fire had emerged. Lynch climbed out of the car and was no worse for the wear. On the next restart, Spithaler decided to simply drive away from Shetler who had been giving him fits in the early going, and stretched out a considerable lead. Bowser and Shetler then engaged in a fierce battle for the second spot as Spithaler entered lapped traffic. Bowser was able to get around Shetler with a turn two slide job on lap 13 and he then set his sights on the leader.

Spithaler seemed destined for victory lane, barring any lapped traffic issues or mechanical difficulty, however he ran just a little bit too fast or too hard into turn three on lap 17 and went over the banking, bringing his night to an end.  Bower then restarted up front, and took full advantage of the opportunity Spithaler had given him, running a very fast and clean final eight laps to the checkered flag that saw him run the fastest laps of any car in the feature.

“I saw Brandon go off the three there, at the time I was closing the gap and it looked like we were going to get into some lapped traffic and hopefully put on a good show for the fans, that’s kind of what I was looking forward to,” Bowser said. “He (Spithaler) was really good and I felt like I could move around a little bit when I had to. I felt bad for him, it looked like he kept getting a little bit higher each lap and I was really hoping to race him.”

Tyler Dietz is quietly having a season he won’t soon forget, and on Friday night, he added another chapter to his story in a thrilling victory over a friend in the process.  Last season’s rookie of the year, Noah Brunell started up front in the 20 lap main event, looking perhaps to stay there for as long as he could. But Brunell would do that and then some as he started on the front row alongside Jim Fosnaught.

It wasn’t an easy thing for Brunell to stay in front by any means as he got crossed up in turns three and four on the opening lap that saw Fosnaught with no where to go but backwards as he took evasive action. However, Brunell was able to re straighten the car and keep the lead while behind him, Brandon Wearing, Aaron Easler and Dietz were priming themselves to hunt the leader.

The action slowed for a caution on lap two as Ethan Siple came to a stop. On the ensuing restart, Brunell kept the lead with Wearing and Dietz in hot pursuit as well as Fosnaught who had slipped back to ninth on the opening lap. An intense battle then developed between Wearing, Fosnaught and Cory McPherson for the third spot while Dietz starting taking looks underneath Brunell, eyeing a potential pass.

Brunell and Dietz were about as close as the could be as the laps wound down, and on lap 13, Dietz finished the pass, taking the lead from his friend and stretched it out as the laps clicked off. Dietz had one last run through lapped traffic to complete on his way to victory lane, and kept a cool head in the process as he made his way around the assorted lappers in front of him to cruise to victory, his second career win at Lernerville.

“To be honest with you he (Brunell) ran a good race, hats off to him because I know how hard it is to get your first one and I feel bad for him, he ran an awesome race,” Dietz said. “He’s improved so much in the last three weeks that I’ve been watching him and he might just get one before the season is over, I’m really proud of him.”