“So much shade around, such high banks, such a tight knit family in the stands and great racing to boot. One cannot express the vista that awaits as they climb the hill, through the trees and make their way to the top of the stairs……there she is, all laid out in front of you, a dirt track you’d probably thought of building yourself, racy as you could imagine and the buildings that looked as if they’d witnessed a certain kind of  history all of which suggested that important things happened here…..and still do.” 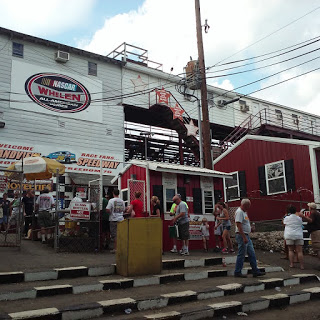 Looking for a new destination, some place you’ve never been but had always heard good things about? Not all places need to look new. Sometimes subtle charm goes a long way in winning the hearts of fans. Note, I say subtle charm and am not trying to misconstrue that with a track containing bleachers that are falling apart, or uncontrolled weeds everywhere you look, or five things on a concession menu of which a track may be out of three come feature time. Subtle charm in this case is something totally different.

When you’re at Grandview Speedway subtle charm takes on a new meaning. The place looked downright friendly, and reasonably kept. Nothing was state of the art, but it didn’t need to be. Red and white painted buildings led the way to the surface which sat like a poached egg on top of a hill and gave view of the legendary steep banking of the turns. It was kind of breathtaking for a first timer and the whole experience was something every dirt racing fan needs to see at some point.

So with that, I give you six reasons to make Grandview Speedway a destination in the future.


6 Reasons To Get To Grandview:

1. The Racing: Okay, so from the videos and your friends that may have been there, you have probably discerned that it’s a little different than places you normally go.  It’s true, and not in a bad way. Contact in the modified realm seams to polarize the audience. Some care for it, some don’t. I will tell you this. Yes, there’s plenty of contact. And, no, it does not at all resemble a demolition derby. Contact to get to the front at Grandview is sometimes necessary, but the cars seem to keep going most of the time. And without many cars simply begging for a caution flag after contact either. There’s some payback at the first opportunity from time to time, but it lends itself to the atmosphere in a laughing kind of way.

There’s hip checks galore, some chrome horn and nerf to nerf bar action on every lap. And the racing I witnessed at this year’s Freedom 76, the most hotly contested race on the schedule, bore that out. But when there was contact, they kept on rolling, everyone seemed to do a great job of straightening themselves out and took the number of the driver that gave them the rub so to speak. The action gets hot and heavy come feature time, imagine 25+ modifieds all trying to get to the same place as the speed carries through the high banks and cars knife through and split other cars to make passes on the straights. There’s three and even four wide going on a lot of the time, and the 1/3 mile length lends itself to the great equalizer, lapped traffic, very quickly.  If you’ve won at Grandview, you’ve really accomplished something. Odds are, you’ve had to use offense and defense to get to victory lane. There appears to be no way of running away and hiding with the lead, especially on a standard, weekly race night.

2. The Atmosphere: I literally watched fans in the turn three and turn four grandstand bantering back and forth in a fun loving manner all night long. They were almost ready to start the wave, which given the consideration of the seating configuration would have been completely possibly. Maybe next time! At any rate the air felt charged, there was anticipation. I regularly attend World of Outlaw shows and other shows of large importance, but don’t always feel that sense that every lap mattered, not as much as I felt at Grandview on this night. The parking lots were full of interesting camps with great tshirt deals and great smelling food. Most of the time I go to large events, it’s pretty standard. Cornhole game over here, two guys throwing a football over there, but there was a different feel to the parking lot altogether.

3. The Food:  It’s as good as can be expected, but far from generic.  Let me start by saying three words “Fresh Cut Fries” Yep, and they’re awesome!  As I strolled up to the main gate, I noticed a young girl working at a device feverishly when I see that she is running fresh potatoes through a manual potato press. Behind her, are 8-50 pound bags of potatoes and it’s hot outside! Godbless her! Other than the fries, you’ll find mostly standard fare with the exception of a Meatball/Philly Steak/Sausage and Hot Soup stand! Yes! It was much too hot for soup, but I bet in April the line wraps around the place by the time the features are over!!

4. Joe the Pizza Dude: During an intermission, it is announced that “Joe the Pizza Dude” is ready to make an appearance.  I had no idea what to expect. And yet, there he was with a green tshirt and a ball cap and a pizza in each arm!  The crowd went nuts! They were screaming! They had good reason, whomever screamed the loudest got a free pizza.  This guy could have signed autographs the night I was there. So when you go, be sure to scream your lungs out, or at the very least, ask Joe himself where you can get a few slices, it must taste heavenly.

5. The Crowd: They were as friendly and knowledgeable as I’ve come across and I was completely comfortable without a lot of swearing and carrying on. But of course, being from the Pittsburgh area, I had to test their tolerance by wearing my Pittsburgh Penguins white hat, a staple of mine at the races. It has absorbed more dirt than anything else I own and looks generally disgusting after six years in service but the Penguin logo is still recognizable.  I didn’t even get so much as a strange look let alone a frown or derogatory comment deep in the heart of Philadelphia Flyer fan territory! This tells me the one thing I need to know, that we’re at a dirt track, and we’re one dirt family. But more than that, they were interesting, a great mix of older and younger.  On the most heated of all nights at the 76er, I didn’t witness one altercation and there’s definitely a strong divide between the Strunk and VonDohren fan bases, they booed and cheered, but did little else to instigate. That’s really saying something.

6. The History: As I said before, the place seems to have a deep sense of history. It’s been around since the early 60’s and has had some legendary names grace the clay. Names like Foyt, Pancho Carter, Darrell Waltrip and Rusty Wallace have all competed there at one time or another. You can check out all of that when you buy a program!  Yes, there are still tracks that have these made and have them for sale on the grounds.  Many fans haven’t seen them, at least ones as done as well as these since the 80’s when nearly all tracks had them.  It’s a real throwback and a touch of pride that seems to permeate every aspect of the place.