With Super Dirt Week and the Pittsburgher 100 upon us, we kind of came across a really good question. What would Tim McCreadie do, and how would he go about doing it.  The veteran Late Model and Big Block Modified wheel man had come across a scheduling dilemma. McCreadie had been following the Lucas Oil Late Model Series for the entire season where he currently sits third in the standings but lo and behold, it is Super Dirt Week at Oswego where McCreadie is currently searching for that evasive first career win. As well as a few satellite shows, SDW related events that are not held at the main site, too.

So what would he do? Be in two places at once…more or less.  McCreadie will participate in both, partaking in qualifying and the Pittsburgher on Friday and Saturday and returning back to Oswego in time to make the early afternoon start in the But Light 300 on Sunday. Thursday’s qualifying effort at Oswego did help make the weekend a little bit less concerning though as he placed himself in the top six cars in time trials to guarantee him a starting spot in Sunday’s main event.  Had he not done so, he would have risked not making the show entirely. McCreadie has just one modified appearance in 2016 when he drover a Brian Swartzlander backup car to a podium finish at Lernerville Speedway in April.

Speaking of the Pittsburgher 100:

With the Lucas regulars in town this weekend, the speculation about which drivers may or may not be joining them began to run rampant. But with facebook and twitter, we’ve come to learn that legendary area pilot Davey Johnson will make his return to the seat of his familiar 1J this weekend and also, northern tier heavyweight (talent…not speaking of the individual here) Dave Hess Jr will also be in attendance.

We can also confirm that Bobby Pierce will not be at PPMS this weekend, as well as Dan Stone, who between the two, most would probably prefer shooting the breeze and partying with. In an unscientific poll of our audience, we found that given a choice, 92% of our readers would prefer to tip back cold beer with “Big Brother” while just 8% preferred Pierce.

The area race, brought back to prominence with national sanctions the last few years promises to be one of the finest late model shows of the season in the mid Atlantic, as evidenced by DirtonDirt.Com’s noting it as such, listing it among the top five races of 2015. Odds are all pointing to a Scott Bloomquist victory..

For more on the details…click here

This Just In…..Matt Sheppard is Good

More than good, Matt Sheppard has been fantastic early on in action at Oswego thus far, putting up the fastest practice time on Wednesday, and setting the overall quick time in time trials on Thursday. Claiming that he had “fantastic race car”, Sheppard  backed up the strong words with an effort that saw him cross the line over three tenths of a second faster than McCreadie.

Also in the mix for the top six spots which guarantee the top three rows in Sunday’s 300 lap, $50,000 to win finale were Justin Haers, Danny Varin, Carey Terrance and surprisingly enough Brett Hearn who’s 2016 performance to date this season had led many to ask if he was actually Brett Hearn and not some impostor.  Thursday’s performance seemed to validate that it was actually Hearn driving all along. Sheppard’s seizing of quick time ensured an 88 way tie for first in our second annual Super Dirt Week Pick’Em Contest presented by Dirt Track Digest.  Good luck to you all!

Don’t take our word for it though….here’s a picture of what race monitor told everyone!! 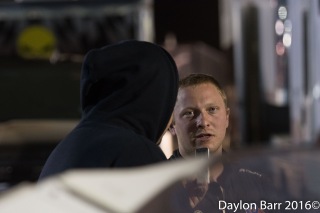 Erick Rudolph may be the most underrated driver in north east modified land, and quite a look alike to boot.  Rudolph won both the Ron Weasley look alike contest and the 358 Series Super Dirt Week opener at Weedsport Speedway on Wednesday night, putting a very stout field behind him

“This means a lot” Rudolph told Dirt Track Digest’s Mike Mallet following the look alike contest. But the race on the track had to give Rudolph a huge confidence boost to start the week. Rudolph will be one of the busiest drivers next to McCreadie this week as he will participate in the Salute to the Troops 150, then drive to I-88 Speedway to compete in Short Track Super Series action that night, then return to Oswego for the 300.

Read more about it here: Rudolph Takes Victory at Weesport

We may as well just say for the indefinite and foreseeable future seeing as how Central New York Raceway Park is as close to being finished as we are to being a complete dirt racing television network!  But another year has been amended to the deal. read more here…and get used to Oswego, which is probably the best place for SDW with the Moody Mile no longer in play.

Read More Here: SDW To Return To Oswego in 2017

Yes, Jamie Weaknecht has the world famous Wago Juice somewhere on site at Oswego. Find him and send a bottle our way please!

We’ll be back with more Super Dirt Week and Pittsburgher 100 coverage later on this week!

The Dirt Network TDN Notebook: Helmet in Bag Weekend Set For McCreadie at SDW and PPMS; Stone and Pierce Absent From Pittsburgher; Sheppard Dominates
Loading Comments...
%d bloggers like this: