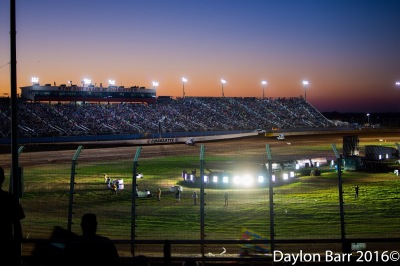 And that’s a wrap. It’s over. The weekend in Charlotte came and went quicker than a thief in the night, and left behind some great memories to take into 2017 once again. Probably the first thing that comes to mind……….is the weather, which hasn’t been anywhere near that good in recent memory of World Finals weekends gone by.  From balmy, to down right hot and without a cloud in the sky for the most part, if we were voting for three stars of the weekend, it would probably be the first one! And also, the folks in the Halloween costumes were hilarious and the fact that we grubbed on Cook Out and Waffle House at least twice each has to merit it’s own star too!

Oh yes, but there was racing this past weekend, and it was fantastic! Great features matched the weather and crowd on hand, and there were fantastic moments aplenty. Jason Johnson’s Friday night feature win, overcoming a determined Dale Blaney who fought tooth and nail to keep a very stout field behind him was worth the price of admission alone.

Not to mention the battle behind them with Donny Schatz moving forward quickly, and a well executed pass on him from the red hot Logan Schuchart that spoke volumes about what the future holds for him, and what the rest of the Outlaws can expect going forward from him. Schatz would take the Saturday night feature in less thrilling fashion, but the battles behind him were entertaining to say the least.

And then there were two…..

Two drivers etched their name in the history books this weekend, and their performances stood out. Not because they were totally dominating in all aspects and ran away by half a track both nights. They were in dogfights the entire weekend. And it wasn’t because they clinched season championships in winning this weekend. One had it wrapped up the second he arrived in Carrabus County. and the other makes his own personal title chase each year in true outlaw fashion. No, these two guys stand out because they’d been so close for so long in recent years and got they got rewarded, and not by lady luck either, these guys earned everything they got. 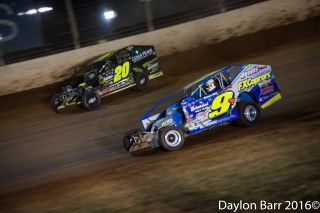 Matt Sheppard had almost nothing to race for. He’d done his job so well that he had everything wrapped up, a series title, 27 wins on the season coming into the weekend. Sure, one could say he runs his own operation and that the money meant a lot. Yep, it was important to a lot of other guys that needed it just as bad too, but some of those guys don’t assume the same risks Sheppard does if it goes badly. For him, every time the car goes on the track, it’s got to be done for the right reasons, and also with a heightened sense of avoiding disaster. And given all that, he drove this weekend with nothing to lose.

Sheppard let it all hang out in Charlotte, picking up the first sweep in the modifieds since Tim McCreadie accomplished the feat years ago. And in doing so, he played the role of the hunted, and the hunter in stark contrast. Friday night Sheppard kept the field behind him as he started from the pole and then had to fight lapped traffic where Justin Haers had successfully run him down and was ready to challenge for the lead. The now five time Super DirtCar Series champion never flinched, never panicked and patiently worked the lappers, dispatching one car behind him at exactly the right time almost all the time en route to the win. 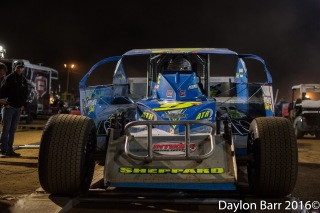 And on Saturday, Sheppard was the hunter, coming from his eighth starting spot with a sense of both patience and urgency that some drivers never really grasp the concept of. 40 laps can be a sprint, but can be just enough time to the bite off of a tire if a driver is chasing the race. Sheppard got to the front and still had the car and the tires left to be ready to make the pass for the win in the waning laps. He was one of the stars that shined brightest, and had to feel like a small weight had been lifted off his shoulders. There are more coveted wins in Northeastern Modified racing, but a win at Charlotte is something different altogether. It’s a win in front of a huge crowd, possibly the largest they’ll be in front of in the course of a season, and in front of a mass of fans, media members, and folks that just don’t get to see the cherished cars all that much, maybe only once a year. They’d known about his dominance in the division over the years, the titles speak for themselves, but on this weekend, they got to see him at his best, he was driving to win and so he did. 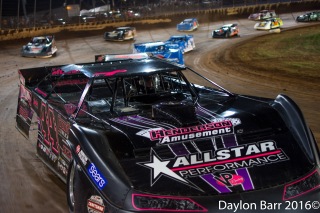 Chris Madden didn’t get to break out the broom this past weekend. He almost did, it was close, but it doesn’t take away from the fact that he’d deserved wins at Charlotte during recent World Finals runs before and had misfortune ruin the possibilities. On Friday night, Madden again looked like he was the man to beat as he led 45 of 50 laps, only to be overtaken by Josh Richards near the end of the race. Richards broke a single season World of Outlaw Late Model record for wins in a season in the process and it looked as if he had the fastest car on the track for sure. 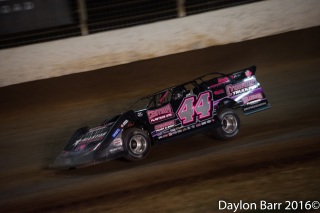 But on Saturday, Madden drove like a man possessed, like a man who simply would not be denied as he kept Richards, a very fast Tim McCreadie and Darrell Lanigan at bay. Richards was forced to the hot pits and took himself out of contention mid race. Had he not, it’s hard to say if he’d have figured in the win on this night. It seemed to belong to Madden, because Madden made it so as he found some bite in the mid groove and then boldly split lapped traffic on lap 48 to preserve the win. He was as fast as could be found in Charlotte on the weekend, and it had to feel special for him, not only to take the win in a field chock full of some of the best on the planet, but to do it in front of a large portion of his home fans on one of the biggest stages in dirt racing, had to feel amazing. If so, it is deserved and shows that karma comes back around if you’re working hard and doing the right things. He’d won at Charlotte (2008) before, but perhaps not with so many fans on hand to admire the skills.  He’d won big races before, some paying more than this. But he finally got to do it on the big stage with a little bit of everyone watching on, and deservedly so. 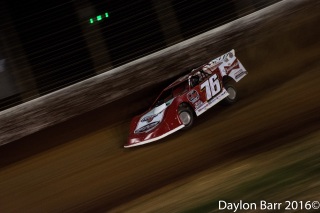 Two drivers who didn’t find victory lane also brought fans to their feet. Brandon Overton was simply amazing to watch as he went through the field like a knife through warm butter not once but twice. On Friday, he sliced and diced his way from 20th to fourth in 50 laps, on Saturday, 20th to fifth. If you were busy checking out the battle for the win up front, you’re forgiven for not completely noticing, but do yourself a favor and watch the replay either on DirtOnDirt.com or later on the CBS Sports re-broadcast. Watch as much of the number 76 as you can, study him and you’ll be amazed, he is truly a special talent, and has now been rewarded with a new ride in 2017. You’ll be hearing his name for years to come. 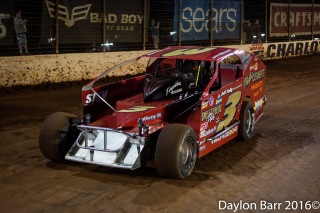 And also, we must give a shout out to Justin Haers who was as fast as anybody during the SDS portion of the weekend. He wasn’t too far off the pace from a weekend double himself if Sheppard hadn’t been well…..Matt Sheppard. He might not be on your radar, but the weekly Canandaigua veteran and part time SDS Series competitor deserves some praise for two very good performances that saw him on the podium this weekend. He didn’t make it easy for anybody in the front after 80 laps of feature racing and raised eyebrows in the grandstands for sure. Which is one of the greatest things year in and year out during World Finals weekend, somebody is going to get some attention that most folks have never heard of, because we’re all gathered in one place at one time and get to see things we don’t always get to see.  We hope you got your eyes full of Overton and Haers this weekend past. They’re special talents..