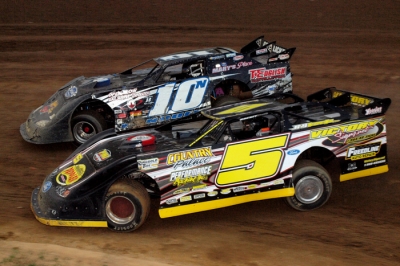 Hey kids, back to the regular night for the weekly update to the weekly su[per late model rankings for Western PA.

This week, Lenerville, Bedford, Dog Hollow, AMP and Marion Center got their scoring shows in. PPMS, Roaring Knob and Eriez all rained out.

I could only find the top three from Marion Center, so one driver got jobbed out of two points for finishing fourth and another lost one for finishing fifth. If anybody knows who finished in those spots, please let me know and I’ll update my spreadsheet and it’ll be reflected in next week’s totals.

Anyways, lets get to the rankings. Been a little shake up this week…

1. Mike Blose, 53 points. For the first time since early May, we have a new leader. Mike has been heating up lately and this weekend was even more evidence of that. He won Friday night at Dog Hollow and backed it up with a win Saturday at America’s Motorsports Park.

2. Alex Ferree, 49 points. Alex falls out of the top spot, but doesn’t fall far. He only ran Lernerville this week, where he came home third.

3. Duane Stiner, 40 points. Duane finished third at Dog Hollow Friday to score some points, but it wasn’t enough to move up in the rankings. In other weekend action, he finished an uncharacteristic eleventh at AMP.

4. Clate Copeman, 38 points. Clate ran second at Dog Hollow Friday night to pick up his points for the week. I am unsure if he ran anywhere else this weekend, because he sometimes runs Marion Center. I can’t find any full results for there this week, though.

5. Rob Blair, 32 points. Rob didn’t score any points this week. He did run a disappointing ninth at Stateline Saturday night, though.

6. Max Blair, 31 points. Max didn’t score any points this week either. He did end up doing much better than his dad up at Stateline Saturday night, though, soming home with the win.

6. Luke Hoffner, 31 points. Luke didn’t score any points this week either. Only place I saw his name in results this week was AMP, where he came home twelfth, which is way worse than he’s used to finishing at AMP.

7. Doug Glessner, 30 points. Doug only scored points at one track this weekend, Marion Center, but he came home with the win.

8. Shawn Claar, 22 points. Shawn didn’t score any points this week. The only place I saw his name in results was Bedford where he came home fourteenth.

9. Dewayne Taneyhill, 20 points. Dewayne scored his only points of the weekend at Dog Hollow Friday, where he finished fourth. In other weekend action, he came home ninth at AMP.

And that’s it for this week folks. See yinz jags again next week.