The Sharon Applefest Nationals night two played out underneath a complete fall like atmosphere Saturday night. The stage set by mother nature was laid out with sun breaking through the cloud deck in an around Sharon Speedway as the air turned crispy while numerous camp fires in the mix gave every indication that the season is yet again, coming to a close week by week. 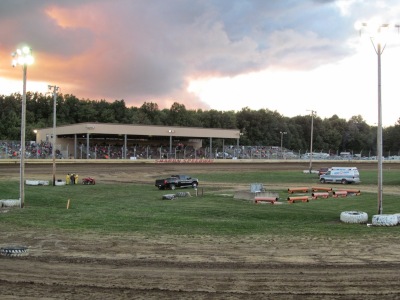 However, disappointing that fact is, the racing on Saturday night took the edge off it as six divisions of action took to the track, providing some dramatic moments in the BRP Modified Tour “Russ King Memorial” feature and some dominating performances such as the one Chris Schneider displayed in the final Penn/Ohio Pro Stock Championship event of the season. 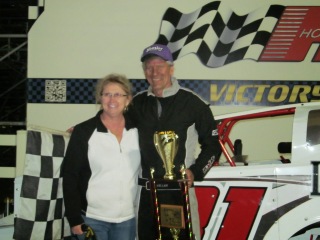 It was a tale of two races in one, with a season championship battle running completely through the middle of the 35 lap feature, and in the end, Jim Weller Jr found himself in victory lane.

Weller started alongside New York invader Chris Hile to lead the 25 car field to the green flag. Both of them would succumb to Jeremiah Shingledecker within two laps.

Shingledecker wasted no time in taking the top side momentum at the start and converting it to a lead from his fifth place starting spot and it was a quite impressive lead at that. As Shingledecker made his way though lapped with traffic with ease on lap seven, another New York invader in the form of Chad Brachmann began making his charge to the front from seventh to third. Shingledecker checked out to a five plus second lead over Weller who’d made his way back around Hile after falling a couple of starts on the initial green flag.

But when a caution involving tour points leader Dave Murdick on lap 16 halted the 37md’s forward progress both the race and the championship battle turned on a dime.  Murdick was unable to continue while his closest pursuers, Rex King Jr and Sr were making their march towards the front, both having redrawn starting spots further back.

Shingledecker had been having his way with the field using the high side to that point, but elected the low side on the lap 17 restart and Weller was able to make his way around him to take a lead which he wouldn’t completely relinquish. The two swapped the lead for the next two laps while Justin Wright moved up to the fourth spot.  Weller then put the field behind him, stretching out to a near four second advantage after a few restarts in the waning laps, but with clean air ahead he was the class of the field on this night.

Shingledecker, who perhaps had used more tire than he would have liked to early on, then played defense and played it well, holding off a hard charging Brachmann who had to settle for a third place finish.

Weller pocketed $2,000 for the victory, his third career Applefest Nationals win, but the matter of the BRP Modified Tour Championship still had to be cleared up.  Though no official word has been made public just yet, it may be safe to believe that King Jr, via his heat win earlier in the evening and his feature finish (6th) most likely are enough to give him the championship as Murdick’s modest lead was erased with his DNF. 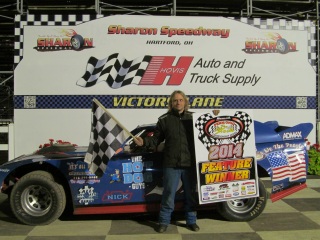 Bob McCann brought the field to the green flag and looked strong early on as did Shawn Fawcett, but it was only a matter of time before Chris Schneider charged from his 9th starting spot towards the front,

Schneider had won on night one from 10th and put an exclamation point on the weekend and the inaugural series point title with his performance in the 25 lap, caution filled feature.

After a red flag for fluid on the surface following a lap four yellow flag. Schneider found himself in fourth and went to work on the leaders including Shane Applebee, Fawcett, and McCann.

By lap 10, Schneider had pulled door handle to door handle with the leader, McCann when the yellow waved yet again. Schneider went up top on the subsequent restart as Applebee moved into third when the last caution occurred on lap 14 as Fawcett and Shaun Hooks tangled between turns three and four.

On the final restart, Schneider checked out to a healthy advantage over the remaining laps while McCann impressively held off Applebee, Ed Bolyard and Chris Withers, who’d moved up to join the top five.

Schneider came into the evening with a decent lead on his closest pursuer in the points battle, Rusty Martz and put any doubt about the title to rest. Martz found it difficult to move forward from his mid pack starting spot throughout 25 laps.

The inaugural champion, Schneider, departed Applefest with two feature wins in addition to his $3,000 series title check making it perhaps one of the most lucrative weekends any stock driver in the area has ever achieved in recent memory.

EModifieds:
Steve Dixon led virtually the entire 30 lap, $1,000 to win emod feature, but it was no cakewalk by any stretch.

Behind him Gary Eicher and Dan Davies were in battle mode for the early laps as the three cars seperated from the rest of the pack early on. but didn’t quite seperate from themselves.

A lap 11 caution re-stacked the grid and on the restart Scott Stiffler joined the party as he moved around Davies to take the third spot.

Dixon took the high road while Eicher worked the bottom in the second half of the feature, and the two engaged in a battle to the end with Dixon holding a mere half second advantage. With the laps winding down, the two found themselves manuvering around lapped traffic where Eicher almost made his way around Davies in turns three and four, but a caution on lap 26 for Shawn Shingledecker who’d spun in turns one and two provided one last restart and chance for clean air for the last four laps.

Dixon took advantage, nailing the restart and driving away from the field once and for all for the victory. Russ Dunn climbed from his seventeenth starting spot to fifth earning the hard charger bragging rights. 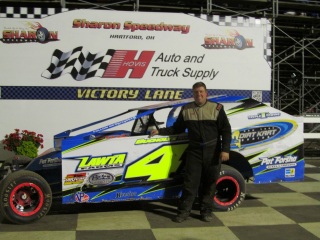 The Western New York native has made the haul to many of the weekly shows in the inaugural season of the series as has Adam Hilton, who’s supplied the greatest amount of pressure to Martin’s wins in 2014.

But, Jeremy Zufall has also had some strong runs this season and Saturday night may have been one of his best as Martin checked out early in the 15 lap feature. Behind them, Hilton had his hands full from the mid pack in his attempt to run Martin down. It took a last lap pass on Larry Kugel to for Hilton to snag the final podium spot.