With a perfect night of weather and a pit area stocked with 22 sprints, the Annual Auto Racers for Kids night took place at Mercer Raceway Park Saturday with extra money on the line for all divisions. Veteran announcer Don Gamble graced the crowd with his presence on the microphone and was joined by the voice of Utica-Rome Speedway, Mike Mallett, giving fans on hand a unique accent on the evening.   Adam Kekich simply drove away from the competition in 410 sprint action while Tommy Kristyak made his way through the field of 358 modifieds to victory.
﻿
In the Outlaw Sprint Warriors, Darrin Gallagher pulled off a Kekich type victory of his own and in the open stocks, Tim Burns held off strong challenges over the course of the fifteen lap main event to claim the win. ﻿ 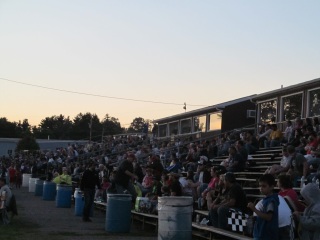 A format of time trials and a dash set the front six starters for the 410 sprints Saturday night. Before the action got underway, Eric Williams, who had claimed a dash position earlier, had to call it quits early with mechanical difficulty.

Friday night Lernerville feature winner Carl Bowser brought the field to the green flag of the 25 lap, $3,000 to win main event, but Jack Sodeman Jr. took the early advantage and looked to be the car to beat in the first two laps. But behind him, Adam Kekich was already making his presence known.  Kekich had missed the dash in time trials but took the win in heat number one and upon Williams’ declaring a scratch on the evening, he’d moved into the sixth starting spot.  Kekich went directly to the top of the speedway and managed to get around Dan Kuriger and Carl Bowser with relative ease and looked to give Sodeman all he could handle in the coming laps.  But the potential battle for the win took a turn on lap three when Dennis Wagner brought out the red flag with a flip on the front stretch.  Then during the break in action, Sodeman went pit side, retiring from the main event which put Kekich on the point when the racing resumed.

When the green waved again, Kekich started stretching out a sizeable lead while behind him, Jimmy Seger and Brandon Matus started making their way to the top five with Bowser and Dan Kuriger still running in positions two and three respectively, until a lap eight caution bunched the field one more time.  On the ensuing restart, Kekich put his car on the top shelf with authority, but moved around without interruption when heavy lapped traffic emerged just past the halfway point.  Kekich changed lines with ease and kept increasing his margin to over five seconds over the waning laps while Kuriger started to press Bowser for the runner up spot which he would eventually wrest away.. Behind them, Brandon Matus and AJ Flick had patiently picked their way through the field, picking their spots, to earn top five finishes, but the night belonged to Kekich, who turned in a dominating performance, and was never in any danger of being reeled in throughout the majority of the 25 lap main event.

After the checkered flag fell, Kekich sent his machine straight to the front stretch for a couple of victory spins to the delight of the crowd on hand.

” As soon as they dropped the green, I ripped around the top of one and two and passed a couple of cars, and I knew we were good and I knew that’s where I wanted to be,” A thrilled Kekich stated in victory lane.  “We actually started reeling in Sodeman, and I actualy thought that I had a chance to race him for the win, and when he dropped out, my stomach just dropped but I got real excited and I just knew that it was my race to lose and I just couldn’t give up.”

Shane Izzo and Sidney Unverzagt brought the field to the green flag in the 20 lap-358 modified main event with Unverzagt in control early on. Behind him, Jimmy Holden and Kyle Fink were in hot pursuit until Holden spun in turn two on the second lap. The spin, in front of an oncoming field collected Tommy Kristyak, Lonny Riggs, and Jeff Shaffer Jr with Kristyak ending up in mid air. When the carnage was cleared, Holden would see his night come to an end with considerable damage, but the other three cars involved carried on and would be the prime players the rest of the way.

Once the action resumed, Fink went to work and quickly put the rest of the field well far behind him, while Kristyak and Riggs would both mount comebacks despite being involved in the lap two altercation.  Kristyak dove under second running Unverzagt with a lap 11 pas and set his sights on Fink, making up significant amounts of ground in a hurry in the second half of the main event, and on lap 15 he made the pass for the lead as Fink’s car had become much slower after lap 10.

On the sixteenth circuit, it became clear that Fink’s car had been suffering some mechanical difficulty and came to a rest in turn two, bringing out the caution which was a welcome sight for Riggs who was running second, but too far behind to seriously challenge for the win.  The table was then set for a four lap battle between Krisyak and Riggs to decide the outcome. Kristyak was able to get to turn one first and secure the bottom groove on both the lap 16 restart and another on lap 18 to seal the deal, collecting a special $1,000 pay day in the process as Riggs was unable to find away around the eventual winner.

Eventual winner Darrin Gallagher may have started on the front row alongside Darren Pifer Saturday night, but from the way the 20 lap feature turned out, it was easy to see that he’d have made it there sooner rather than later.   Gallagher immediately went to work on a multi second advantage while Cody Bova and 410 sprint driver Brandon Matus tried their best to entertain the crowd on hand with a battle for the second spot. Gallagher entered lapped traffic on the ninth circuit and picked through it flawlessly en route to the victory while behind him, Matus was unable to make his way around Bova for the runner up spot.

Tim Burns may have been the alpha and omega when it came to lap leaders Saturday night, but to say he dominated the action would not pay credit to the action on the track.  Burns took the green flag of the fifteen lap main event while behind him, Bob McCann and Brent Johnson stayed close in the early laps as the three leaders looked for the best bite around the surface in an attempt to make their way to the front.  The three cars were seemingly nose to tail for a great portion of the race, all running the bottom groove.  Rusty Moore, coming from his seventh starting spot, and Bobby Heim from fifth, both made their way to the front in the waning laps but could not find a way around Burns. 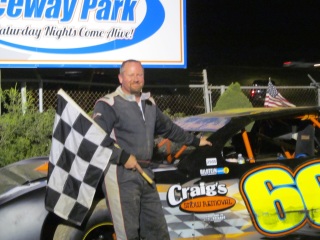