SIDNEY, NY – January 5th, 2016 – Every now and then we dirt racing fans experience a changing of the guard so to speak. The one spark that every driver has, that makes them nose their car into an already three wide battle, that makes them push the cushion to its max, that makes them run every lap as hard as they can with the utmost focus, starts to fizzle out. It’s inevitable, and every season means another tally mark is added to the age category. We end up seeing those same drivers making less features, running limited schedules, and sometimes entering full on retirement. But the saying goes that when one door closes, another one opens, and there is a tremendous amount of strong, young talent bursting through that open door as we enter the 2016 modified racing season.
Erick Rudolph 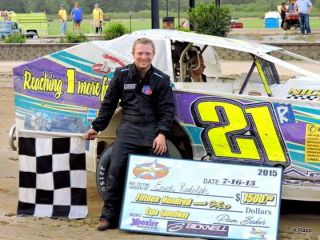 Age: 23 (24 on January 9th)
You may have already heard about Erick Rudolph, but if not, you will this season. This kid is on the verge of something big in the modified ranks. A regular at the Ransomville Speedway on Friday nights, Erick ran his modified to three wins and a 7th place finish in the point’s standings following up his 2nd place finish in points the year before. In total, he made 83 starts and won 9 times in 2015 with 53 top 10s. Twelve of these starts came on the Super Dirt Series tour and he marked down 3 top five finishes. Erick has over 260 feature wins in his career in various cars from modifieds (dirt and asphalt) to indoor midgets. He has proven that he can wheel dirt modifieds by winning consecutive 358 DIRTcar Modified championships in 2013 and 2014. It is only a matter of time before we see him winning big money races on the tour and being in serious contention for the Super Dirt Series title. Erick will race anywhere at any time, which is proven by his very high number of starts this past year. He has the drive that rivals Danny Johnson, who raced one of the most rigorous schedules that modified fans have seen in a long time.
Mat Williamson

Age:  25
Already with two Lernerville modified track championships under his belt, hot shoe Mat Williamson has already committed to running for the 2016 Lernerville track championship. Also on the docket is a full commitment to competing on the SDS tour as well as taking on the land of legends, Canandaigua Motorsports Park, weekly. Canandaigua features some of the toughest modified competition in the northeast being home to the likes of Matt Sheppard, Tim Fuller, Gary Tompkins, Justin Haers, and Steve Paine. Williamson got his first Super Dirt Series victory in 2015 besting the stars at the Bob St. Amand Sr. Memorial race defending his home turf of Merrittville Speedway. Williamson has one of the highest levels of dedication to his program and racecars that I have ever seen, saying that he puts in at least 70 hours of work into the car a week. It’s this dedication that will have Williamson breaking through this year. He used 2015 as a season to get his feet wet, and we saw what he could do when he won at Merrittville. The expectations are higher than ever now, so expect to see him be in at least the top 10 in points of the SDS title hunt.
Mike Mahaney

Age: 27
Although Mahaney has been in modified racing for 5+ years now, we have yet to see him really step into the spotlight. Now that he is set up with a ride that will take him to new heights, the potential for success can really thrust him into the mix with the “big boys” in the northeast. Sticking to the short tracks in recent years, Mahaney has won track championships at both I-88 Speedway in Afton, NY (2013 and 2015) and Thunder Mountain Speedway in Center Lisle, NY (2015), as well as being in the mix with some of the biggest names in the sport at Utica-Rome Speedway finishing 3rdin points behind Matt Sheppard and Larry Wight. The Buzz Chew ride that is now underneath Mahaney will allow him to run for the Super Dirt Series title as well, making it his first real attempt at this feat. In 2015 he started 7 races on the SDS tour, setting a career high. Mike drives with a Pat Ward-esque style, being easy on equipment, patient, and all around consistent. He finds ways to the front and is always a threat if he’s there at the end. Look for him to attempt almost all, if not all, of the SDS races this season in the new ride.
Anthony Perrego 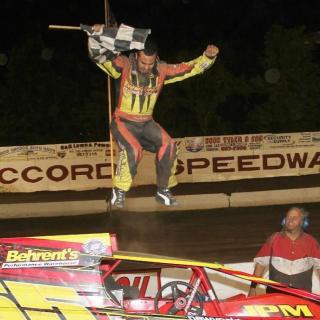 Age: 21
He’s the youngest driver featured in this article, but watching the way that he drives you’d never be able to tell. Anthony Perrego finished 5th in the North division and 2nd in the South division of Brett Deyo’s Short Track Super Series in 2015. Perrego has a Southern Tier 100 victory to his name already at the famed Five Mile Point Speedway, as well as a number of top 5 finishes in the STSS races. His first modified win came back in 2013 at first annual Gobbler at Accord Speedway. Perrego has advanced to the modified division extremely fast, as he won the sportsman track championship at Accord in 2012 with 2013 being his first full modified season. A full run at the Super Dirt Series may be a few years off, but modified track championships will come for him soon. Anthony is a smart driver that showed that he can conserve the right rear, doing so during the Southern Tier 100. He learns quickly, and has the ability to get it done with the right setup. It appears that Perrego will be making more big block starts next season, as the 55 Motorsports Facebook page has posted that they have built a new car for Anthony’s 2016 campaign. Another strong showing on the Short Track Super Series is definitely coming for this young man.
Jordan McCreadie 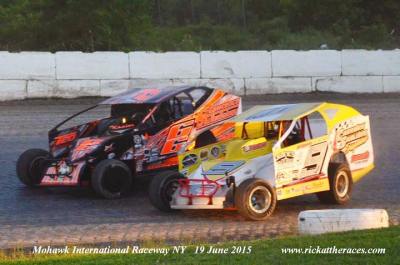 Age: 26
The man with the most pressure to succeed is Jordan McCreadie. The McCreadie name is synonymous with winning races. His father is Barefoot Bob McCreadie, a legend amongst the modified names. His brother is T-MAC Tim McCreadie, the 2006 Chili Bowl and WoO Late Model champion. Being a part of a racing family with that kind of name results in a lot of pressure to meet expectations, and he has been consistently improving since coming to modifieds in 2011. Coming off his best year on dirt yet, he finished 4th in points at the Mohawk International Raceway. That 4th place finish comes after cutting his teeth racing weekly with guys like Tim Fuller, Billy Dunn, and Carey Terrance pictured above. Jordan made the trip to the Syracuse area for Super Dirt Week and showed some serious talent at the satellite shows. He impressed quite a few people, including me. Jordan has not committed to a weekly or touring series yet, but hinted at possibly the 358 DIRTcar modified tour and Cornwall Motor Speedway weekly. Jordan stated that he is “looking into following more high profile races for next year that’s for sure.”