Hey there Dirt Nation, it’s another great action packed weekend ahead with most major series in play and some great events.  Those can be costly, though they’re all well worth it. So for this week, let’s keep the cost down in the parking lot tailgate with a cooler full of these.. 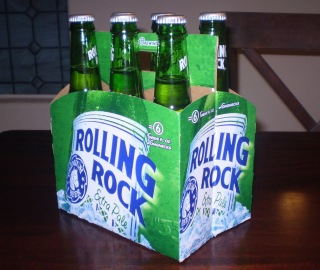 Yep, that’s right…Rolling Rock. They’re easy to drink, and if you knock down a few of them like bowling pins, you won’t stagger through the ticket window with a Sears charge card in your hand trying to buy tickets. They get the job done effectively and they won’t hurt your wallet!  Now let’s talk about some races!

It’s time for the WoO to start back up following a lengthy absence, and they’ll do so this weekend at the annual two day, Illini 100 at the legendary Farmer City Raceway. Friday will feature a full 30 lap to win feature instead of just time trials and heats this year with the 100 lap finale on Saturday night. Who to look for? You can expect the best of the hell tour with Feger, Babb and others in the mix, and also Brian “Don’t Call Me” Shirley who now calls the WoOLMS home.  He’s been on fire lately, sweeping the annual Thaw Brawl and has had some impressive runs to this point of the season. All eyes will be on Shriley, but they’ll wander to Josh Richards who will be a prohibitive favorite coming into the weekend at the 1/4 bullring.

Point Standings Coming Into The Weekend:

Donny Schatz recovered nicely from his failure to start a feature a three weeks ago at Tulare by sweeping the weekend at Stockton two weeks ago while Jason Johnson returned to Placerville, scene of a bad crash for him in 2015, and picked up the feature win. 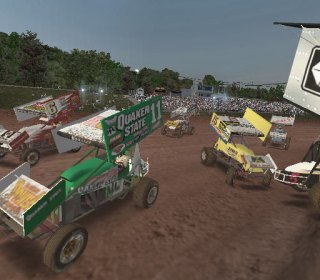 The series resumes this weekend at the picturesque Ocean Speedway on Friday night, and on Saturday at the 1/4 mile at Silver Dollar Speedway in the annual Mini Gold Cup. If World of Outlaw Sprint Cars for Play Station 2 teaches us anything about Silver Dollar, it is that cars will fly out of nowhere  over the banking and knock your car over, and also that the race can be won from dead last if you can survive the endless attrition,…even if you normally suck.

Points Coming Into The Weekend:

Oh how we’ve missed them, the All Stars, and they’re kicking off their season Saturday night at Atomic Speedway (OH). Dale Blaney leads the pack coming off yet another championship season, and he’ll be chased by Kraig Kinser, a rejuvenated Danny Holtgraver, and a promising ensemble of Cap Henry, Chad Kemenah, and several others. Many eyes will be on young Sheldon Haudenshild who snagged a few feature wins in 2015 and could very well increase that total substantially this year. If you’re in the neighborhood, don’t even think about missing this one!

It’s not a points race for the USMTS this weekend, but it’s something all it’s drivers dream of winning. The annual King of America Modified Nationals hits the clay at Humboldt Speedway in Kansas. Over 100 entrants are lined up to take part in the first special event of the season, and virtually every heavy hitter from Minnesota to New Mexico will be there. Sanders, Gallardo, VanderBeek, Thornton Jr, Strickler, Schute, Johnny and Stormy Scott….we could go on and on. If you’re not able to be there, be sure to check out the entire weekend at Racindirt.com!

Want to see what the commotion is about? Check out this video:

The Dirt Network On Tap- WoO Lates and ASCoC Sprints Kick Off; WoO Sprints in CA; King of America Weekend
%d bloggers like this: