The forces of nature were no match for the night of racing at Lernerville Speedway on Friday night as the full scheduled program withstood a lengthy rain delay yet saw the final checkered flag fall before midnight. The showers helped make for a tremendously tacky surface all the way through the four feature events. But despite that fact, the carnage remained minimal and the action kept fans on the edge of their seat in three out of the four main events. For Jeremiah Shingledecker and Brandon Spithaler, it was turn back the clock night as both drivers found victory lane for the first time in over two years while Joey Zambotti picked up his second career Lernerville victory in the Millerstown Pick a Part Sportsman. And, Western PA rookie of the year Kole Holden picked up the win in RUSH Sportsman Modified action.

There have been some bizarre guest appearances at Lernerville over the years, but perhaps none in recent memory was more bizarre than Tim McCreadie’s sudden appearance in Brian Swartzlander’s backup car. The Watertown, NY driver found himself rained out at his scheduled Lucas Oil Late Model event at Sharon Speedway, and ventured south to take on the modifieds in a unique twist. His likely victory probably seemed like a forgone conclusion to many fans in attendance as the feature came to the green flag, but he still had to get around three cars in twenty five laps from his fourth starting spot.

One of those cars belonged to Jeremiah Shingledecker and he had no intention of letting anyone get around him on this night.  Shingledecker shared the front row alongside Rodney Beltz as the action got underway and he quickly asserted himself as the man to beat, taking the early lead while McCreadie firmly positioned himself directly behind him in the early going.   Behind them, Dave Murdick, Garrett  Krummert, Kevin Bolland and Mat Williamson made up a formidable chase pack in the early going.  The quick mover was Willimson who seemingly picked up one spot after another in the early laps. Out front Shingledecker and McCreadie began the battle for the lead as lapped traffic came into the equation on lap eight. Shingledecker used all available groves to get around the back markers and did so effectively as he put distance between himself and McCreadie as the halfway point approached 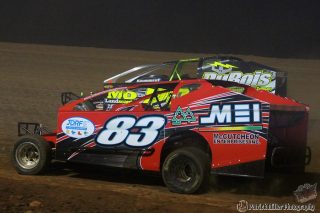 Then with Rick Regalski’s car the next to potentially go a lap down, McCreadie made his move and almost got around Shingledecker as McCreadie’s car worked with precision in turns three and four. Shingledecker was able to finally get around Regalski as the laps wound down and then made his way past Mike Turner in much quicker fashion that McCreadie would be able to moments later.

The action then came to a halt on lap 19 when Steve Feder and Brian Swartzlander brought the red flag. Both drivers were unscathed in the incident, and the stage was set for a six lap shootout that saw Shingledecker elect the high side where he had not spent too much time in early green flag laps. The move paid off as Shingledecker got a great restart not once but twice as he elected the top side restart following a caution for Rex King Sr. on lap 20.

When action resumed, Shingledecker took a comfortable lead across the finish line for his 50th career victory and his first since May of 2014.

“It really feels good to get back here to victory lane,” Shingledecker said. “I really have to thank the whole crew for sticking with me while we weren’t winning, it’s been a struggle for all of us. Once you’ve got your foot to the floor you just can’t go any faster so you just hope you can beat them at that point. I think the high side was the right decision on the restarts and it really paid off for us.”

It had been over two years since Brandon Spithaler had enjoyed victory at Lernerville and his performance in the sprint feature made fans in attendance wonder just how and why it had been so long between wins.  To say Spithaler owned the field on Friday night may be an understatement, he dominated it as evidenced by the amount of cars left on the lead lap as the checkered flag waved.

Darren Pifer and George Hobaugh Jr brought the field to the green flag and Spithaler wasted no time in making his intentions known. He headed directly to the top of the speedway where a considerable cushion had developed and pounded it with authority.  After a couple of early cautions involving Cory Good and AJ Flick, and a red flag moment for Brandon Matus who ended upside down on lap four, Spithaler went virtually unchallenged for the remainder of the race.  His closest pursuer, Jack Sodeman Jr. had worked his way from fifth to second in the early laps as Spithaler found lapped traffic and slid through it like a man on a mission, and by the time the halfway point came around, he had lapped all but Sodeman Jr.

The caution flag waved on lap 17 for Mike Miller giving Sodeman Jr. one last chance to make a move for the win, but on the restart, Spithaler once again put considerable distance between himself and Sodeman Jr. and cruised the rest of the way to the checkered flag to collect his second career Lernerville victory.

“If I had my choice the track would be like this every night,” Spithaler remarked making reference to the tacky surface. “I couldn’t do it without everybody that came together to help all this happen, we tore up a motor at Bedford last week and lost a motor in our truck too so thanks to Dennis Wagner and others we were able to do this tonight.” 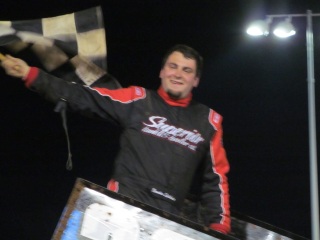 Joey Zambotti made his championship intentions known Friday night by putting his machine in the winners circle and himself atop the points standings. And though the season might only be two events old, it’s apparent Zambotti won’t be budged off that position easily.

Both he and Aaron Easler started the race together and ended it together in thrilling fashion as Zambotti got out to the early lead on a track that still had plenty of bite to it. Behind them, Bob Egley, Brandon Wearing and Joe Kelley would try their best to chase the two front runners down in the early going while week one winner Corey McPherson and Terry Young quickly made their way to the front from their mid pack starting spots.   As the race moved along, Wearing and Kelley began challenging Easler for second, but the fact that Easler was occupied with the action behind him didn’t mean that   Zambotti could simply walk away from the field as the first five positions remained up for grabs.  Easler kept Zambotti within reach. Zambotti reached lapped traffic on lap eight and started working the bottom flawlessly, while he zigged and zagged through the lapped cars, sometimes using all available grooves in one set of turns to do so. 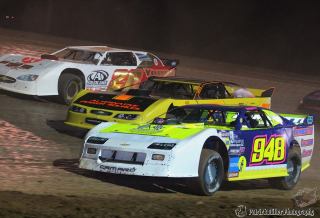 Terry Young then entered the equation in the second half of the race as he climbed to the fourth spot while the action ahead of them started to get tighter as Kelley and Easler traded positions two and three for a brief time, however Easler would get back around Kelley and began a furious charge towards Zambotti in the waning moments.

Zambotti remained one mistake from watching Easler collect the win as the closing laps wound down, but he would not be caught despite a very close finish as the lapped car of Stan Riggle slowed the action down in front of him and almost allowed for Easler to get around him on the final lap. However, Zambotti held on for the win, displaying a good bit of defensive fortitude in the process and climbed the front stretch wall in celebration. 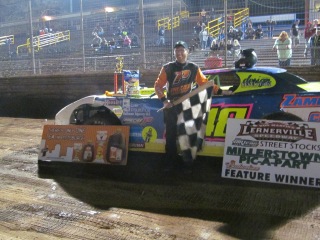 “We were up late last night and tried some different stuff on the scales, we were expecting it to be hard and slick like last week and the rain came so that kind of changed our plans,” Zambotti said. “Dad had a good idea and I let him run with it. I could tell somebody was starting to push me there towards the end and I just tried to be smart with all the lappers there but I didn’t know he (Easler) was that close.”

To say the RUSH Sportsman Modifieds were a two car affair Friday night would not be doing complete justice to the drivers behind them at the end of 20 laps. However, it would be an accurate statement to say the least. In one of the most thrilling battles of the night in any division, Chelsie Kriegisch and Kole Holden put on a show for the better part of the feature event

Kriegisch appeared to have things in control in the early going as she sprinted out to the early lead with Holden situated behind her just a few tenths of a second away.  Behind them, Jeremy Weaver and Jerry Shaffer held positons three and four respectively.  After a lap four caution. the two drivers battled door handle to door handle for the lead while Shaffer got around Weaver for third on lap five.

But for as close as Holden could get, he could not get around Kriegisch as she put on a defensive clinic to keep Holden at bay. Even lapped traffic did not seem to help Holden’s cause as Kriegisch moved high and low to pass a steady flow of lapped traffic.  Holden was successful on his lap 18 bid to take the lead when he moved up high with less than two laps to go as he waited for his perfect opportunity and found it by moving to the top of the surface in turn four. Holden won the drag race down the front straight away to wrest the lead from Kriegisch. The seventeen year old modified plot knew exactly what to do when he got to the front and kept himself ahead of the determined Kriegisch who had to settle for a hard earned second place.

“Sometimes you just have to be patient and wait for the right opportunities and there with about three or four laps to go I saw one and I took it,” Holden said.  “Sometimes you have to guess where to go and sometimes you make the wrong decision, tonight it worked out.”