“I never had any desire to drive, and yet somehow, I ended up being a race car driver,”

Jared Miley mused while taking a break from his full time job at Rocket Chassis recently. It’s a statement that seems hard to believe from the Western Pennsylvania based super late model driver when one looks at his history and the success he’s been having in recent seasons.

“I always had a passion for racing and for working on the cars and stuff, I was 16 when they wanted me to try and I didn’t actually get into the car until I was 18 and I finally said alright, fine, I’ll give it a try. So I started out in a semi late at Pittsburgh and on the first night, with no practice, I kept up with the field and didn’t get lapped which was pretty good. Then the second week I finished third in my heat race and in the feature I got to start on the pole and we won the race.  After that, I liked it. I think I was afraid that I wouldn’t do good, but after that second week I was hooked on it for good.”

Sometimes, a little nudge in the right direction is all that it takes to start an incredible journey. And so it came, from his family nonetheless. A name synonymous with dirt and late model racing in the tri state area. His uncle Matt, the owner of Pittsburgh, Pensylvania’s Motor Speedway, and his uncle, super late model legend Ben Miley with some help from others help propel Miley, aptly nicknamed “The Jet” to the car. And once inside it, Miley was a natural. His driving style, a nearly perfect blend of patience, aggressiveness, and precision, developed over the years, has brought to everyone’s attention the fact that in a land of super late model talent, he may be the best driver in the area not partaking inn any kind of a national tour.
“I’d love to travel more. It’s like the ultimate goal to be able to do that. I’ve just never really had the opportunity. We have some good equipment and stuff, but to do it on a national level, it’s unbelievable what it costs.  I don’t think many people have any idea what it costs to race at that level.  I have to work for a living just to race and the finances are just not there yet to travel nationally.   I try to travel as much as I can with what I have to work with. At the end of the day, if all the funds were there and I didn’t have to work and I could go and race for a living, I would definitely take the opportunity if one came along. But for right now I just have to keep working. This year we did get a couple more sponsors to add on than we’ve had in the past so I’m excited about that. We really have to be over conservative sometimes with where we choose to race at. We have to consider the format of the race, the weather too. Wherever we go, I try to make sure of. It’s hard to make money racing but it almost pays for itself if you keep everything in one piece and win enough races. So we try to be consistent. If we can’t win, at least we bring the car home in one piece.
It is also a sentiment echoed by some of his peers in the industry, namely one Alex Ferree.
“Miley is a really good one to look at,” Ferree said in a recent interview.  “He is on that cusp of being able to go and travel but to take that next step is just such a commitment, You have to have motors and cars all ready to go and it’s just such a huge jump to make. One or two bad weekends in a row, you could be out of everything. No cars, no motors, and just like that you’re done.”

Miley has now etched an impressive resume that includes over 70 feature wins, a Lernerville Speedway track championship and a 2015 ULMS title with much of the success coming in the past four seasons. If his recipe for that success can be summed up on one word, it is consistency. It what he’s learned and works time in and time out as evidenced by some impressive drivers he’s observed over the years.

“I think we’ve always been pretty consistent, and then once you start to win at tracks you might have never been to before, you kind of just stick with something with the car that just helps keep it consistent. I’ve always tried to be consistent with something than just going all over the place. I grew up watching my uncle race, and other guys like Lynn Geisler, Steve Baker and then regionally guys like Chub Frank and guys like that. You kind of have to drive like certain drivers in different conditions because everybody has the track conditions that they prefer, so if you want to be really good you have to be able to run all of them. I never really talk about driving the car with too many people. My dad actually taught me a lot and he’s not even a driver.”

One of the drivers he watched all those years, helped lead him down the path he’s currently on where he works long hours putting together cars at Rocket. It was a situation where his passion met an opportunity. However it does come with a cost. Miley currently lives close to the shop in Shinnston, WV on a Monday through Thursday basis while he makes his home in the Pittsburgh metro area. For great stretches of the year, he seemingly lives at work or is in his hauler on the way to a race.

“I’ve been there for five and a half years now. I basically called Steve Baker about working down here just prior in the summertime. I’ve been around racing my whole life, I learned how to do sheet metal work since I was twelve working on my uncle’s car. I always liked doing that stuff and I figured it couldn’t hurt being around it all the time. And I thought it would help improve our own program too. We’re extremely busy, it’s by far the biggest dirt late model manufacturer in the country so it’s like a wide open pace around here all the time. But Mark and Steve are really great to work for. The toughest thing about it is just being away from home during the week. I couldn’t ask for a better wife, she handles it really well. Sundays I just like to hang out with my wife and our dogs, we actually just bought our first house so we’ve got a lot of work going on there. But we do like to take a day and just lounge around at home. We pretty much race, or we’re on vacation. Me and my wife both love racing so I want to be around as long as I can.”

And so it goes for Miley, working long, tiring days for a living while also preparing a car for a set of weekend races. And the body of work in the last few years has shown that it has more than paid off. And that hard work and preparation was on full display during the three day Firecracker 100 in 2015. His performance over the three eventsmay mark the spot where people will look back years from now, and remember the first time they knew they were watching something special, especially the fans from out of the area that normally don’t get to watch him race. 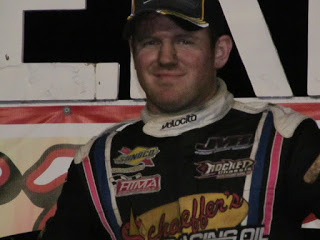 To amass weekly and regional wins are one thing, or to even end up in the mix for victory in a normal length national tour race for that matter. But Miley’s performance in the Firecracker went beyond that. He finished with a podium spot on the first preliminary night, and used it to move forward on the final night which was held over from June. Once the green flag fell, Miley quickly moved into the lead and was gone and completely in a different time zone, well ahead of the rest of the pack and looked to be en route to a historic upset in a high profile event when the eventual winner, Shane Clanton found his way around Miley on lap 62. He came home third when all was said and done, but it was a night that local fans will never forget.

“We were satisfied with how we ran. Anytime you can run in the top five with the World of Outlaws or that caliber of competition it’s good. We knew we were capable of doing it. We’d run finished third during one of the preliminary nights. Now at least I feel like I’m capable of winning maybe a fifty lap World of Outlaws race if anything. I think it’s just the experience in 100 lap races that a guy like me that does more of a local/regional type of schedule just doesn’t get.  Those guys race 10-12 of those races a year and they know how to go and when to go and how to manage their time. If I had to do it over again, I probably would have slowed the pace down at the beginning of the race. I think I used up my tires a little bit. And maybe if I would have had a spotter, usually I’m just out there by myself with nobody out there, I think both of those things would have helped me that night.”

Miley couldn’t help but wonder though, what the experience of winning there would have been like.

“I remember sitting in the stands at Lernerville just watching races when I was little and I never even imagined that I’d be a race car driver let alone be in contention to win that type of race. It would be crazy to win it, I think the place would really erupt just because we’re from around there and race there quite a bit .  We just have to work hard and try to keep up with everybody and see if we can’t pull one off this year.”

It’s a good bet Miley will get to experience that type of hometown win sooner rather than later, whether it’s at a Firecracker 100 or his true hometown track in the annual Pittsburgher 100, a race he has qualified for every year he’s attempted it. Miley seems at home at the multi day weekend shows, not just on the track but off it where if one stops by his hauler they may be able to snag homemade “jet fuel” a blue drink made by his wife Rachel.

“I honestly still don’t know what’s in it except there’s different kinds of alcohol and some kind of fruit juice in it. It tastes pretty good though,” Miley says while pondering about the experiences he enjoys during a big weekend show. “I definitely look forward to the weekend races where everyone stays over and hangs out together after the races and stuff. Working on the cars, it’s actually work, I’m an extremely competitive person and I hate to not run good. I put a lot a pressure on myself. I just want to keep it consistent and if I keep getting consistent finishes I have a lot of fun. But winning a race is an ultimate high. I can’t explain what it’s like to win a race.”

Odds are he won’t be able to explain what winning a Firecracker 100 will be like completely either, it will be understood though, by every fan in the stands when it comes to fruition.