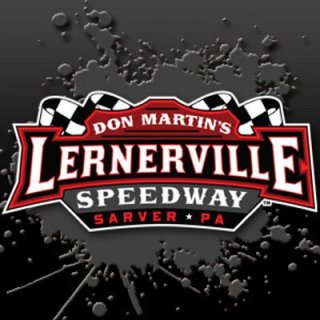 Sometimes it’s better to be lucky than good, and then other times it’s just better to be better. All four feature winners in tonight’s fab four racing card at Lernerville Speedway were all on the better side with a little luck factored in. The action on the track played out beneath beautiful skies and on a surface that kept drivers guessing all night long.  AJ Flick took home his second feature win of 2016 in the Peoples Natural Gas Dirt Car Sprints while Alex Ferree found victory lane for the first time this season in the Precise Late Models. In Diehl Automotive big block modified action, St Catharines, Ontairo’s Mat Williamson scored a very difficult hat trick by way of winning his third consecutive feature, and in the Millerstown Pic-A-Part Sportsman, Terry Young wired the field in the most dominant performance of the night.

It took 25 laps and three red flag periods to finish, but when all was said and done, AJ Flick managed to stay focused through a period where he was desperately hunting the leaders, followed by a stretch where he had to nail a critical restart and fend off a hard charging Dan Kuriger en route to victory lane for the second time in 2016.

Sye Lynch, making only his second start of the season, brought the field of 20 cars to the green flag, but his time on the throttle was short lived as moments after the start of the feature, week three winner Brandon Spithaler hit the front straight wall and flipped hard causing the first red flag of the race. The incident also ended the night for Eric L. Williams and Zach Morrow who both were collected in the carnage.

On the ensuing restart, Lynch vaulted himself to the top of the surface and stretched out a healthy early race lead over second starting Dan Kuriger and Flick who fired with authority on the restart going from the sixth spot to third after the first set of turns.  Up front, Lynch was setting a blistering pace and leaving the field in his wake as he found his first batch of lapped traffic on the fifth circuit. Lynch blew through the early lappers and looked to be in total command until Kuriger and Flick found lines to their liking and when they did, they both set their sights on running down the front runner. 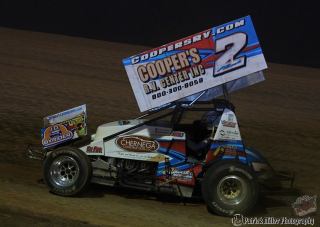 Kuriger got there first on lap 10 and he began taking looks to the inside of Lynch, and on lap 12, he made the pass work and brought Flick along for the ride. The two drivers seemed set to duel for the remainder of the feature when the red flag waved again as Ralph Engel flipped in turn two. Once action resumed, Flick put his car on the top shelf and rocketed around Kuriger to take the lead as he carved out a multi car length advantage over his closest pursuer. Behind them, points leader Scott Priester kept doing what he’s been doing all season long to this point, staying consistent and avoiding disaster while staying fast as he stayed in the top five all race long.


Flick’s night was not over despite the increasing advantage over Kuriger as the final flip of the night took place on lap 19 when Darren Pifer wound up upside down on the front stretch. But on the following restart, Flick sealed the deal, driving away from Kuriger to collect the win.

“Sitting there for three red flag periods was really getting to me,” Flick said. “I just wanted to finish the race. I didn’t really have an option on the pass for the lead tonight. He (Lynch) was too good that when the track was fast nobody could do anything. Dan couldn’t touch him, I couldn’t touch Dan. We were basically just follow the leader and I was focusing on keeping the car in one piece and hoping that I made the right changes so that the track comes to you and it did.”

Doug Drown and Doug Eck stopped by to pay a visit at the action track on Friday night as they joined the regular Lernerville weekly field. And for Drown, victory looked fairly inevitable for the first half of the 25 lap feature. However, Russ King and Alex Ferree had other ideas and let loose on a frenzied chase in the second half until good fortune broke their way.

Dan Swartzlander and Drown made up the front row as action commenced but not one lap would enter the books before a melee in turn four for a Michael Norris spin reset the stage.

Once action resumed, Swartzlander found himself in the lead while Ferree and Drown
set their sights on him, with Drown in particular, selecting the low side of the speedway to make up ground.  Following a couple of early cautions and restarts, Drown found himself in another zip code by lap four and had switched to the high side of the speedway. Behind him, the slide jobs started coming fast and furious as Russ King began moving forward with authority in the early going.  King was on a mission, and appeared to present the stiffest challenge to Drown’s early domination until the caution flag came out on lap eight for Gary Lyle who suffered a flat left rear.

Once the race got back underway, the intensity of the battles behind Drown increased as last week’s winner, Michael Lake entered the fray up front along with Mike Pegher Jr. who was an early forward mover, coming from his eighth starting spot to third place. Lake, King and Matt Lux then embarked on a classic battle for position that saw one slide job after another. Lake would exit the battle on lap 12 when he made contact with Lux and went over the top of the track in turn two. Lake’s car finally came to a halt on the front stretch when the caution flag came out on lap 13.


After the restart, Drown once again made for the top and took another lengthy lead while Ferree was tucked comfortably in the second spot for the entire time. Ferree quietly went about running fast, running smooth and keeping himself in postilion. However Russ King was restless and ready to hunt the leaders. He passed Pegher Jr. on lap 13 to take the third spot and looked poised to strike again when the final caution took place on lap when Lux succumbed to a right rear flat tire near the same time that the leader Doug Drown’s night came to an end as he entered the pits with a flat tire of his own.

King inherited the lead, but Ferree had a better restart as he took a lead he would not relinquish as both he and King pounded the cushion in a desperate attempt to either get away from or closer to each other.  Ferree would survive one final restart on lap 20 and one final charge from Russ King as he dove low in turn two to attempt a slide job but came up just short sending Ferree to victory for the 34th time in his career

“I got super lucky,” Ferree said in victory lane. “Doug was pretty fast and had that piece of  steel pop loose and pop his right rear tire. I got a good pill tonight which was a good deal. The track was different that what we were used to and definitely made it more fun.”

To win three feature events in a row, you’ve not only got to be dominant at times, but also lucky at times, and consistent at all times. Mat Williamson was all of those things on this night as he made his way to victory lane for the third times in as many attempts.

From the drop of the green flag, one thing was clear, that Jim Weller III was going to give WIlliamson all he could handle. Early on though, it was Rex King Sr. who held the top spot as Williamson began his assault from his 10th starting position. Weller III then began to close the gap as he found a little extra momentum on the top side and made his way around King on lap five.  Williamson, working primarily on the top of the surface, then managed to put himself in the top three by lap six, leaving Brian Swartzlander, Jeremiah Shingledecker, and Rex King Jr. in his wake until the caution flag waved on lap eight for Shingledecker who’d stopped at the bottom of turn one.

When action resumed, Williamson made his way to the bottom with Weller III still in command and on the high side as the two ran three car lengths apart. By lap 14, Williamson found himself .6 of a second behind Weller III. But the lead was still up for grabs as Weller was trying to throw everying but the kitchen sink behind him. On lap 16, there was a noticeable stream of smoke coming from the back of his car but he still refused to concede as the two swapped the lead in the same lap. On lap 18, Weller jumped the cushion allowing WIlliamson to take the lead for good while behind him, Brian Swartzlander, King and King Jr., would battle for the remainder of the race for position. But the night belonged to Williamson who would not be caught and even added to his lead as the laps wound down. 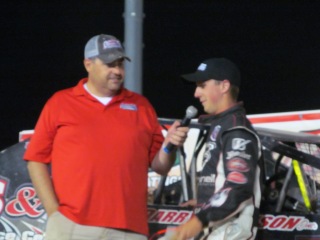 “It’s certainly tough, this modified field keeps getting better and better every year and it makes it tough,” Williamson said. “I got some mud in the right rear tire about halfway in when Jimmy was in front of me and I didn’t think we would get him. So I just kind of went to the bottom and tried it and got a little better. The cushion was certainly treacherous in three and four and it made it tough.”

John Hartman and Terry Young brough the field of 18 cars to the green flag, and they went in opposite directions from that point forward. Young put his brilliantly designed number 28 car resembling the late Nascar driver Davey Allison’s scheme to the top side and the lead and never looked back.  Behind him, Paul Schreckengost led a pack containing Corey McpHerson, Bob Egley, and Joey Zambotti.

Young appeared to be checked out for good until a large dose of lapped traffic or a caution killed his momentum. Young survived both instances though. First, the lapped traffic, and second a caution flag for Noah Brunell who spun in turn two on lap 20.

Lurking behind them, was one Corey McPherson, the division points leader. McPherson made his way from his ninth starting position up to third in a handful of laps and looked to be perhaps the only car that had anything for McPherson.  When action resumed, Schreckengost tried his best to wrest the lead away from Young, taking the lead briefly for parts of lap 11 only to watch Young take it right back.

Young would go virtually unchallenged the rest of the way to collect his first win of the season while Scheeckengost, McPherson, Egley, and Tyler Dietz would battle for the final podium spots which would go to McPherson and Dietz 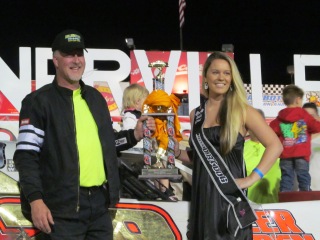 “It was a good track and had lots of speed,” Young said in victory lane.  Plus I didn’t have to go through all the traffic like they did so I had an advantage off the get go.”