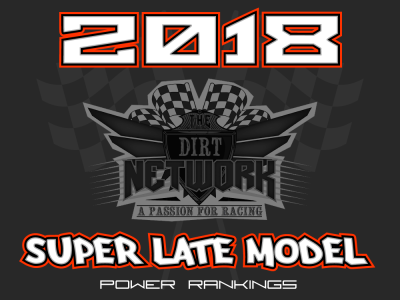 Hey there race fans, it’s Monday, so that means I’m here with an update to the rankings.

This week saw everybody who had a show scheduled get it in, as Mother Nature played nice again. There wasn’t s many specials this week as last week either, as the majority of scoring shows were regular weekly shows. There were just two specials, the 8200 hundred to win show at Bedford Friday, and the 3k, which ended up being 5053 because winner Michael Norris qualified for a bonus that required him to be in attendance at the Herb Scott Memorial that went down a couple weeks ago, ans he was in attendance at that show.

There was a scoring error last week, as I erroneously reported that Jared Miley failed to score points, but that wasn’t the case. He finished third at Bedford last Friday. The results I use to compute the  scores omitted Jared’s name from the results for some odd reason. It’s the second time that’s happened this season. Might have been the fact that he’s now in the Corrado 10 instead of the family H. His name was in the results this week though, so maybe the source I used has fixed the issue.

That said, let’s go ahead and get to this week’s top ten…

5. Jared Miley****, 54 points. Jared wasn’t able to score any points this week, but as mentioned, he does get credit for third at Bedford last Friday.

And that’s it for this week. It’s only like second time this year that there’s no ties in the top ten, and that 2-5 battle is heating up, with them all being within 12 points of each other. Should be real interesting headed down the stretch!