Port Royal, PA- A warm afternoon greeted fans and drivers at Port Royal Speedway on Saturday and they were treated to some fantastic racing on display at The Speed Palace. Ryan Taylor managed to keep the field behind him, holding off a strong charge from Dale Blaney en route to his sixth career win at Port Royal in Sprint Car action. Meanwhile. 2018 Late Model champion Jeff Rine proved to be the class of the field, pulling out yet another convincing win, his first feature victory of the 2019 season. 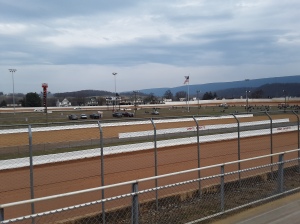 Having come fresh off a 12th place finish on a slick surface the previous week, Ryan Taylor was looking for a recipe that worked setup wise and he most certainly found it on Saturday. Taylor started up front in the 25 lap main event and never looked back which was probably just as well since veteran wheel man Dale Blaney was ready for any mistake to pounce on.

Taylor quickly jumped out to the early lead as if he’d been shot out of a cannon until a caution for a slowing Brock Zearfoss reset the stage with two laps down. When action resumed, Taylor used the top side of the speedway to take another strong lead followed by second starting Lucas Wolfe while Blaney began making forward progress with authority from his sixth starting spot.  Taylor found himself in lapped traffic with eight laps down and after fending off a challenge from Wolfe, found more speed as the laps clicked off as Blaney set his sights on Wolfe for the second spot.

The yellow flag waved again with 13 laps in the books for a Brent Shearer spin, setting up the scene for the second half of the race.  When action resumed, Blaney made his way around Wolfe and began hunting Taylor for the lead.  Taylor was flawless though, and never gave Blaney a missed mark or long decision in lapped traffic to capitalize on the rest of the way as he crossed the finish line first with .761 seconds to spare over Blaney.

“I didn’t know who was behind me,” Taylor said. “I never looked at the scoreboard. So many times you see races lost at the end of the race. I think it’s because people start worrying about what’s going on behind them. I just worried about where my car felt the best, where I had the most grip and where I needed to be and now we’re here.”

*Danny Dietrich and TJ Stutts had to start at the rear of the field due to mechanical issues.

Jeff Rine knows the way to victory lane at Port Royal and how to keep others out. On Saturday, Rine was simply the class of the field as he was able to move around in different grooves until he found one too his liking, passing Austin Hubbard with 10 laps to go for his 24th career victory at the speedway.

Hubbard brought the field to the green flag and quickly assumed the lead while Gary Stuhler and Gene Knaub took up positions two and three in the early laps of the 30 lap main event.  Hubbard stretched his lead to over two seconds in the early going while moving forward with precision and purpose were night one winner Jason Covert and Dylan Yoder from their seventh and eighth starting spots respectively.

Also on the move was night two winner and current Late Model points leader Michael Norris who could put his car where he wanted it and showed speed for the entire 30 laps. Norris and former Lucas Oil Series driver and Chalk Hill, PA native Mason Zeigler both made charges to the front in dramatic fashion.  Norris climbed from his 20th start to finish fifth while Zeigler made his way from 14th to fourth over the course of the race. Both drivers could have used just one more caution to make a bid for a podium finish or a win, but it was not in the cards.

The yellow flag did wave on lap 14 for a slowing Ralph Morgan. When action resumed, Rine was firing on all cylinders, hunting Hubbard relentlessly until he found the perfect opportunity on lap 20 with a clean slide job in turns one and two that stuck and enabled him to stretch out a sizable advantage once out front.

“It’s just awesome,” Rine said. “What a surface. I didn’t know where to go there and Hubbard was up top and I started rolling the top down there and then I thought I gotta give it a shot down here and I made some time down in three and four and had enough momentum getting into one. I gave him a slider and it was all over from there. We didn’t really change anything (after track surface preparation) because where would have to pass was where it was slick. I just drove it through the rough stuff down here, hanging on and bouncing like a bronco but we got the job done.”

Rine gave a glimpse of his season plans during his post race interview.

“We’re going to go mainly between here and Selinsgrove,” Rine added. “Whichever one is paying more that night we’re gonna go to and if they’re paying the same we’re probably going to go to Selinsgrove because it’s closer to home.”

In Limited Late Model action, Devin Hart started on the pole, gave up the lead and got it back with a pass in lapped traffic on lap 12 to take the honors in the 20 lap main event.