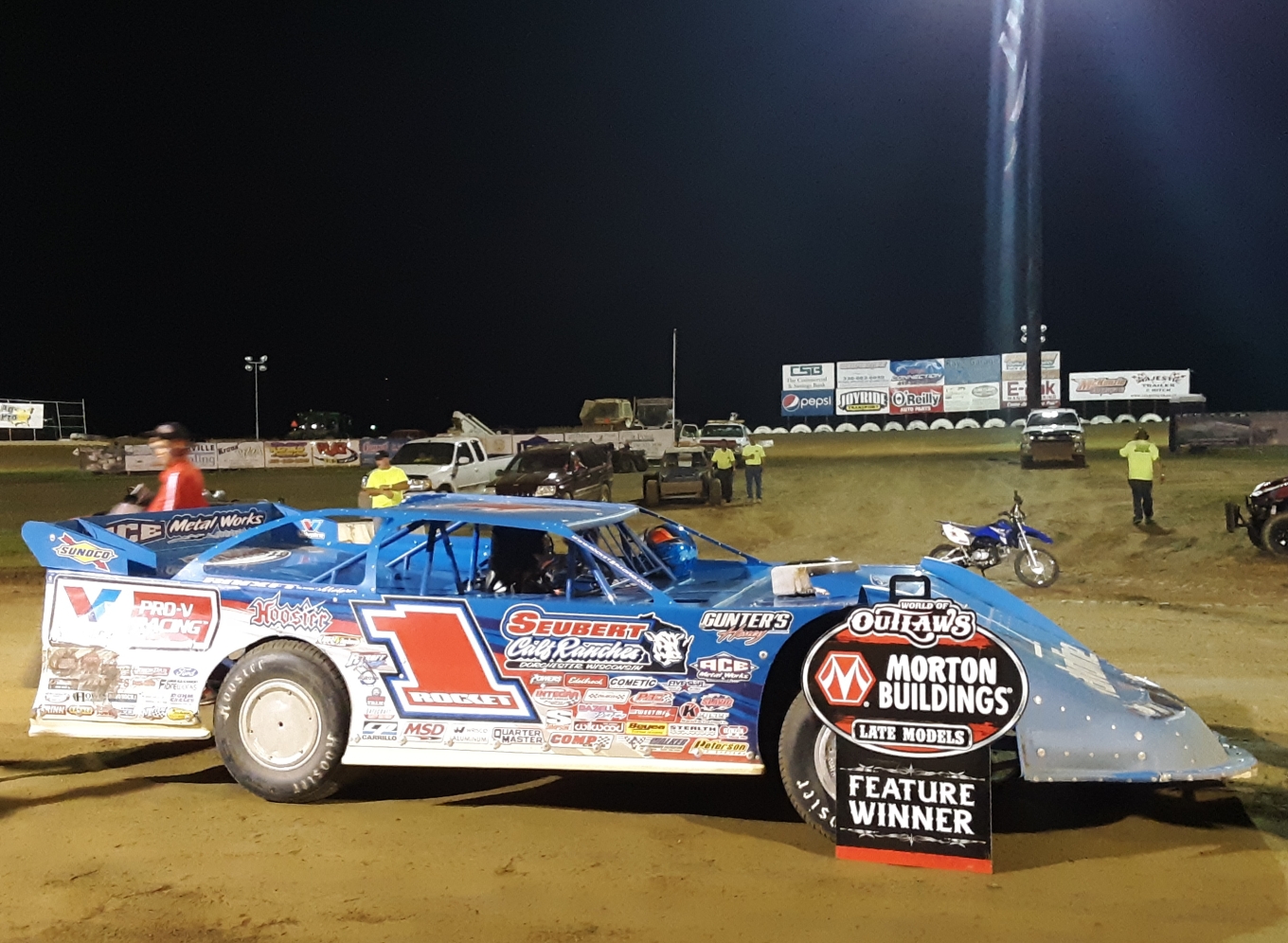 “Brandon Sheppard will start in the third spot tonight,” World of Outlaw Late Models Series announcer Rick Eshelman said or something to that effect. It was hard to tell, because all I could think about at the time, was how many laps it would take for him to put the field behind him. My initial guess was about 10. Especially if there were a couple of restarts while the pack was settling in at the start of the 50 lap main event on Saturday night at Wayne County Speedway.

Sheppard has been at or near the top of the National Rankings on DirtonDirt.com seemingly on end for the better part of the past few seasons. And while there was a stout field on hand Saturday, it seemed to be a forgone conclusion that he’d be holding the trophy in victory lane. It wasn’t a matter of if, but when.

He did manage to find a way to the win, my prediction though was totally useless. Brandon Sheppard managed to fold in a great deal of facets in the mix of what makes a truly great driver in this one, and the performance served as a microcosm.

Firstly, he watched Darrell Lanigan bolt out to a seemingly commanding lead and there were no early restarts to use for him as a means to put the field away. Lanigan who was determined and ready to make a statement, was in the early command, and after Sheppard made his way around Dennis Erb Jr., I began to re calculate what lap he might take the lead for good. It was just a case of figuring out if it would be restart, lapped traffic, or simply tracking Lanigan’s line until the time that would springboard him to the lead. The answer could come towards the end.

Sheppard was all over Lanigan after a lap 16 caution reset the field, and could not find a way to come up with the pass. A lot of that had to do with Lanigan who was maneuvering through lapped traffic with relative ease, leaving one piece of it behind him after another for Sheppard to deal with. He never once seemed willing to make the one slip that would cost him the race. Sheppard could have been easily frustrated and potentially let that frustration boil over into a bad decision. And that’s just another aspect of what makes him the driver he is. Sheppard was patient. It was almost as if he knew the proper time was coming even as the laps wound down.

He pulled door handle to door handle in the last 10 laps in heavy lapped traffic, only this time, he had to deal with an oncoming Ricky Weiss, after already having survived a stiff challenge for the second spot from Doug Drown that would have taken the eyes off of challenging for the lead for a good many drivers. It was as if Sheppard had blinders on. Not the ones that remove periphial vision, but the ones that keep a driver focused on the task at hand, and give the ability to allow a driver to drive their own race and never lose sight of the plan. Sheppard had those on, and that tool, is yet another one in his skill set that keeps him atop of the National Rankings.

Sheppard did manage to find a seam for a pass and took full advantage of it with around five to go. It was no surprise. After all, he’s a champion and the moment would arrive at some point, he simply left no doubt when it happened and never flinched with Weiss all over him for the win in the last two laps.

Those instincts, that skill, and the uncanny knack to know when to make a move, when to be patient and how to take full advantage of just one opportunity are what separates the good from the great. Sheppard’s got all of that, and it was on display, every reason that makes him a threat to win anywhere against anybody, all in one race at Wayne County. Hope you were there to see it…..