It’s getting colder, football dominates on TV, and Ebola has half the country or more paranoid.  But there’s still dirt racing going on, and it’s our job here at TDN to give you something to read in the john on your lunch break, to help you catch up on what you may have missed while you were out busting your ass at work.

Maybe your wife kept you busy putting the yard to bed for the winter. Or perhaps an old girlfriend came in from out of town and you couldn’t pass up the opportunity to revisit memory lane in some cheap, sleazy, bedbug ridden hotel, using up the last of your credit card balance for one more night in the sack.

Don’t worry, we’ve got you covered! Here’s what you missed this week in DIRT!

Bloomquist Administers Beat Down in DTWC:

Late model legend and self professed “voodoo child” Mr. Scott Bloomquist once again dominated a 100 lap “crown jewel” race in the 34th annual Dirt Track World Championship at Portsmouth Raceway Park (OH) Sunday afternoon, arriving in victory lane to a chorus of 60% boos, 30% cheers and the other 10% of the fan base that had to leave early because they weren’t allowed to be out so late on a Sunday evening.

Bloomquist started towards the front, took the lead with 39 laps to go, and never looked back to secure yet another big money win. Which happens to be a good thing.  Just several weeks ago, Mr. Bloomquist had been lamenting the financial struggle of late model touring drivers in an attempt to organize a telethon with the hopes of raising awareness and money towards the plight of the down trodden drivers who criss cross the country, losing money left and right to entertain fans.

Seriously, this is as good a season ending run as we’ve seen in quite some time. The field he put behind him today and at Eldora and would have at Knoxville had it not been for a last lap mechanical failure has surpassed Billy Moyer’s 2010 season in terms elite wins. We’ve yet to hear if crotch chops were thrown in victory lane, but if they were, they were justified.

In other Lucas Oil Late Model news, Don O’Neal won yet another tour championship on Sunday. 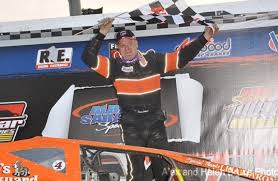 The Doctor Operates on Brockville;

Dr. Danny Johnson performed surgery this past Friday and Saturday. The geriatric wonder was found missing from his retirement home complex early in the morning on Friday and found in Brockville, Ontario later on that evening winning a 358 DIRTcar modified tour race.

Johnson then took a tall drink of Metamucil and vowed to stay for Saturday night’s festivities “It’s carving time” Johnson said to the gathered media on Saturday evening, and then he went to work, keeping the stars of the Super DIRTcar big block modified series behind him for 100 laps to close up the surgical wounds left form two days of operations.

Seriously, it’s great to see Johnson so relevant this late in the season. He’s having a blast it shows in the results. Congrats Dr. Johnson!

For the full race recap and results click here

Donny Schatz put a stout field of local Ohio drivers and a few outlaws behind him in grand fashon in Fremont, OH Saturday night coming from deep in the field which prompted us to come up with a new drinking game in his honor.

To play, simply obtain a bottle of your favorite liquor and a shot glass, and then take a shot for every pass Donny Schatz makes in a feature event. If you’re not such a good drinker, you may elect to only take a shot when Schatz makes an actual pass, and not for any driver ahead of him that pulls off the speedway. But, if you’re a real party animal, try it in a race which Schatz comes from a Bmain aka the “Sucks To Be You Race) or (Lord Jesus, please let me transfer race) and hammer down to a shot on every single position he climbs regardless of how.  This Saturday, you’d have had 14 “Schatz’s Shots” and would probably have awaken to the sounds of jackhammers in you head, but that’s half the fun.

*Please drink responsibly and DO NOT DRIVE….ANYWHERE after playing this game!

To see exactly who Schatz passed on his way to his 26th feature win of the season, simply click here

Promoter Carl Short found $50,000 in his sock Saturday night at the Dirt Track World Championships and has vowed to double the purse of the 2015 main event. This makes the DTWC the second $100,000 to win late model race in the country though still not quite as prestigious as the World 100 at Eldora.  The IRS has been called to investigate Short’s sock for interrogation.

The National Dirt Model Hall of Fame in Florence, KY has officially named the following drivers to be inducted next August at the North/South 100. Congrats to all of them for such outstanding careers:


And that’s it for this week. Stay out of trouble and Stay DIRTY!

The Dirt Network This Week in Dirt; Bloomquist Opens Can of Whoop Ass; The Doctor Operates on Brockville; Schatz’s Shots; Carl Short Finds Money in Sock
Loading Comments...
%d bloggers like this: