To win a championship in any kind of racing there are different approaches and mindsets used to determine the best method to achieve the goal.

Some might automatically refer to “points racing”, where a driver tends to hold back a little here and there to ensure the resources hold out a little longer while still managing a good finish week to week.

Others might maintain that racing to win, is the best approach to winning a championship. By keeping the focus on winning, taking chances and letting it all hang out so to speak. It’s risky to be sure, but multiple wins have a way of negating the effect of a couple of dnf’s when the risks don’t pay off.

Jim Fosnaught found his own approach in 2014, and it didn’t quite bear resemblance to either philosophy. He went out on the track each Friday with the simple goal of just having fun and letting the chips fall where they may. And it worked for him. The approach called for a complete change in attitude and focus, those internal things in all of us that can be the hardest changes to make, and he did so with authority.

“It’s always been something that my brother and I’ve talked about is that we never try to race for points,” Jim Fosnaught said in a recent interview with us at TDN. “When you really start to think about the points, when you start playing that points game in your head instead of just racing the car, you really know you can do better and you’re just settling for less. This year, we had a whole different philosophy coming in. 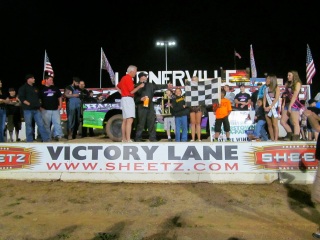 Fosnaught went on to collect six Fab Four Friday wins at Lernerville Speedway in 2014, en route to his first ever DIRTcar Sportsman Stock Championship, outdueling previous multi time champion Corey McPherson and was the class of the field in the highly competitive division.

“In the past, I’d tend to get too emotional and cause a lot of stress in our pit area just because I’d let stuff get to me. But this year we said that we’re just going to go out there and race, we didn’t care about points and we really didn’t care about winning, whatever was meant to be was what was meant to be. And we kept that mindset for most of the year. There did come a time when I started to think about the points though, but I didn’t let it take me over. Basically, we were just trying to have fun.”

But even though it’s been nearly three months since he won his first championship, the feeling has yet to sink in, and it’s not a bad thing as far as he’s concerned.

“To be honest with you, it still really hasn’t sunk in. It’s funny, I’d recently broken my leg so I had to take one of those motorized carts around Wal-Mart because I can’t crutch around, so I’m driving around the aisles and my girlfriend tells me to be careful. I told her listen,  you’re talking to the 2014 Lernerville Stock Champion while we’re both laughing, it’s was totally a funny moment you know, and then it hit me,” Fosnaught said as he erupted in laughter.

“But it still hasn’t really sunk in, and I kind of hope it stays that way actually. It really doesn’t mean I’m the best driver or the best car, I just had a lot more of those better nights than some others did. People keep talking to me about the season, and I still can’t believe that it all actually happened, it’s been unreal.”

The wins didn’t stop with the end of the Lernerville regular season for Fosnaught. He pocketed $2,000 for his win at Autumn-Motive Fest, the annual sportsman stock race at Lernerville that traditionally brings out the best of the best from within the region. Fosnaught bested the 37 car field, putting an exclamation point on his 2014 season while beating some of the stiffest competition in the area.”

“I still can’t believe I turned the fastest lap that night,” Fosnaught said remarking on the surreal feeling surrounding the biggest victory of his career. “I mean I watched Rusty Martz win one of his first races at Challenger years ago, that guy is amazing. Guys like him and Chris Withers, to see those guys and race against them was awesome. But the one person who I always say that I’d be surprised to beat is Chris Schneider. He’s just so dominant in a stock car for so many years and even now just to watch him race and see what he’s done and to actually beat him on that night and to have a straightaway lead was amazing and if I never win another race, I’ll always be talking about that one with pride.”

The topic then changed from his amazing 2014, to his beginnings in racing..


“I was a little kid, and my uncle used to race enduros at Lernerville, it was my first race there and I was probably about six or seven years old, but once my family was involved and racing gets in your blood, you can’t get it out of you,” Fosnaught said.

“As a kid, my favorite driver was Ed Lynch Jr and it wasn’t even because he was winning but it was more about the color of his car. I liked other drivers in other divisions but he’s one guy that stuck out. I remember getting my first Lynch Jr tshirt when I was young and you couldn’t get it off of me.”

“I originally started in micro sprints and spent two seasons in them and I did pretty well. I won a feature and three or four heats. And then we moved into the stocks, my brother thought it was a good idea and with the knowledge he had and knowing Chris Schneider, whom we’ve known since we were younger, we played football together, we went out and bought a car.  Originally we bought a stock from Ohio that had been wrecked and the back half of the car had been cut off, but we brought it home and did all the fab work by ourselves and we modeled it off of an S and S chassis and that’s where we started in stocks.”

Fosnaught learned fairly quickly in stocks, and proceeded to get better year after year, displaying a great deal of natural talent, and yet a willingness to learn from mistakes. Fosnaught had a good degree of success in recent seasons, his first feature win came in 2012, and he’d been very close to winning some others. But a series of bad luck coupled with some decisions he’d probably have liked to have back, had kept the consistency he’d been looking for at bay.

He’d undergone a mindset change, which takes courage and blunt honesty with oneself.

“I think a lot of that had to do with getting back to church and getting God back in my life. There’s something more important than we have in this world, the possessions of this world don’t mean anything. It’s a brand new outlook for me. I’m making a transformation to becoming a better person and it’s actually helped me with racing. It’s not the end of the world if we don’t win.”

And that change has also carried over into his thoughts about what kind of racing he’d like to do in the future.

And for the fans in Fosnaught Nation, the change has brought about a person who embraces his rather large group of people, decked out in their tshirts and standing up when he makes a pass. It has led to a connection with them that goes far beyond anything he could have imagined.

“It means a lot to me, if it wasn’t for the fans coming there we wouldn’t do what we do. We love racing, but we also like to entertain and whether that’s positively entertained or negatively, it’s still people there at the race track enjoying the same thing that you enjoy. Even though they’re not in the same cars as us, those fans relate to us in some kind of way. I’ll walk around the stands, and see people that have my shirt on, people I’ve never met or seen before. It’s an amazing thing, and I love the fact that we have fans like that. It’s humbling, it really is.”