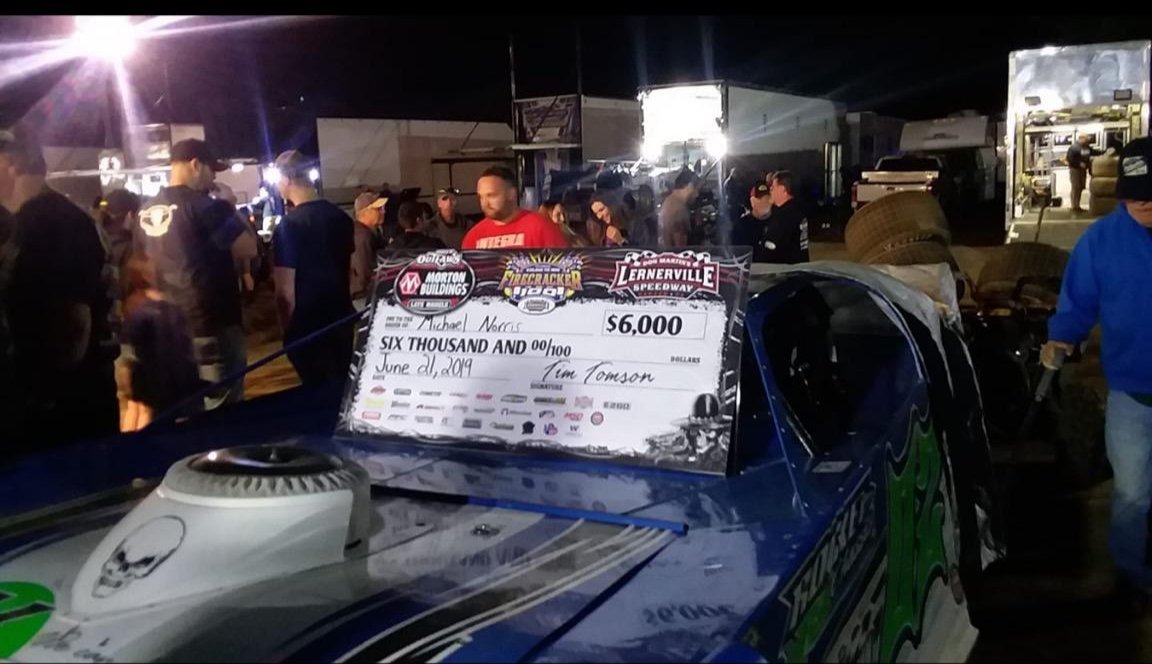 Fresh off a Firecracker 100 preliminary win on Friday night at Lernerville Speedway against The World of Outlaws Morton Buildings Late Models,  “The Crusher” Michael Norris found himself sitting in Charlotte NC in a hotel awaiting the Clint Bowyer Racing team’s departure for Tazwell Speedway.  A unique set of circumstances created an opening. And Norris was more than up to the challenge.  Norris was selected to fill in, subbing for driver Don O’Neal on the Lucas Oil Late Model Dirt Series. Oneal will be out of racing for 8 to 12 weeks due to an injury.

Norris received the call around noon on Wednesday. “My dad told of the news about Don O’Neal being out for a while”, Norris said. And said ‘you should text Josh (Richards)’ and asked we if they would be interested in me as a fill in driver. The next thing I knew I got a phone call from Casey Bowyer.  Casey talked to Mark Richards. “I got to thank Mark (Richards) and Brian Daugherty of Integra Shocks for putting a good word in for me”

When asked what went into getting him to The Clint Bowyer shop for the seat fitting Norris said., “We had to get my seat out of the 02 car and packed up all my stuff and went to Charlotte, I crashed in a hotel for a while then headed to CBR to get fitted for the #5.”

Norris was certainly appreciative of a phone call from O’Neal  personally as he called Michael and gave him a huge vote of confidence.  “That meant the world to me, Norris said.   You hate getting into someone else’s ride that’s injured but having Don call helped out a lot”.

Clint Bowyer himself had a short conversation with the appreciative young Norris and simply told him to go out do your best and treat it like it’s your car.

There is a huge lesson here for all up and coming racers that Michael Norris hopes that reaches many young drivers. “If you work hard and apply yourself and dedicate yourself look what can happen.” It pays to dedicate yourself.”

Michael gives his family and his entire crew much of the credit for what he has achieved thus far in a career that has seen him take multiple track championships at Lernerville Speedway and two wins against the World of Outlaws, as well as setting quick time on a preliminary night at the World 100 at Eldora Speedway. “Whether it’s for one race one week or whatever I got an opportunity to race for CBR as a hired driver, I’m so blessed to have this opportunity to get the rewards and chances my father never had,”

Hard work, dedication and committment have made Norris a rising star over the past few seasons and doors open to drivers that have natural skill combined with a work ethic  and passion that is difficult to match. Norris has earned every bit of the current opportunity and will continue to open more eyes on a national level with it.

The Dirt Network Norris- Door Opens For Crusher Kid Through Skill, Hard Work and Patience
%d bloggers like this: